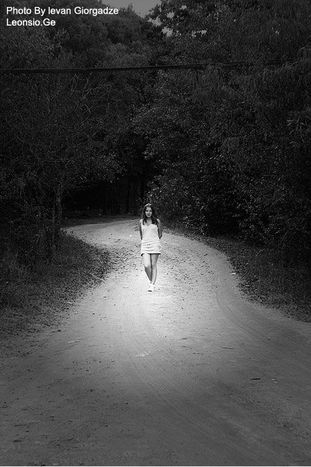 Young women in georgia : how they live

Growing up in a post-soviet country is hard because many people behave as if time stands still. Most of my elders believe that women should not have the same rights as men, and while things may have improved a little since the 1990s, it is still very difficult to be a woman in Georgia because this is a very difficult context in which to express yourself. Opinion from a Georgian teenager

As a young woman I feel compelled to talk about the situation faced by young women in my country, about how men treat women, and about my own experience as a young woman in Georgia.  In Georgia we have a lot of traditions that reduce women’s potential as a person. Men believe that woman should be at home cooking, taking care of children or cleaning. Also, men think that they have the ability to beat their wives and no one has the right to disapprove. That’s why there are few complaints about domestic violence in families. People think that it’s not their job to protect innocent wives from aggressive husbands. The victims of abuse are depressed and their children, who see and hear everything, are aggressive as grown ups.

Secondly, most Georgian women are unemployed and are dependent on their husbands or parents. After my parents divorced, our family, which consists of four people – my mother, my grandmother, my little brother and myself - had no income. Most importantly neither my mother nor my grandmother want to work. Unfortunately, since I am so young I can’t complain about their decision. My father recently started working and now helps me and my brother, but I still cannot figure out how we survive. My mother was always dependent on other family members because she has only one year of work experience, and despite all of the problems that our family had she never contributed to the family income.

However, many women do not work because their families or husbands will not allow it. Often, men are jealous and don’t want their wives to be near other men. Of course there are exceptions; I am proud to say that I have role models who are strong women and work hard to succeed in their lives. One of them is my aunt Manana, who has a loving family and adores her job. She doesn’t have problems in her family and her husband is understanding. While growing up, I’ve seen her studying and working hard. Manana did everything by herself and no one helped her. I want to be successful like her, because she is one of the few women in Georgia who are independent.

As an 18-year-old Georgian girl I’ve always been an independent child. My parents are always open-minded about my actions and they know that I don’t want to be dependent on anyone. My first job was in the 'social media development fund' where I worked as a blogger. I was just 15 years old and I had no salary, but I wanted to have a life experience. I adore writing. As a 12-year-old girl I began writing love stories. When I was 14 I discovered blogging, and I’ve been a blogger ever since. My family is very supportive. They read all of my posts and my father even got me my own domain. They talk about my posts and discuss them with their friends and relatives.

I’ve since worked for various organisations, such as the non-governmental organisation 'Akhalgazrduli Initsiativa - Chaerte' ('Youthful Initiative - Involve') in 2012. We have worked on various projects, and I received my first salary cheque in July. Having my own money felt very good, and since then I am too shy to ask my father for pocket money. Now I study psychology and political science at Tbilisi State University, hoping that I will be successful in life and be independent. My dream is to have a flat and to live alone. I plan to continue writing for my blog about people and society in my country. I also hope to continue blogging in English so that foreigners can understand the nuances of Georgian culture and the events of everyday life.