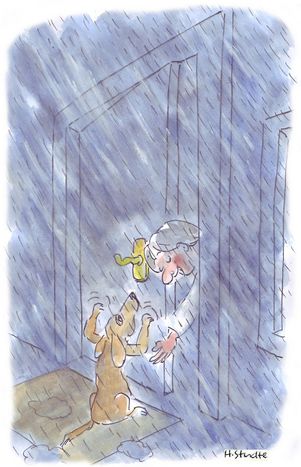 'You'll get a fat bitch for that'

When dogs are mentioned in European sayings, it can range from anything to being related to money, your inner self or the weather in Poland - idioms of the week, plus audio

The Polish might say that the weather is so bad, a dog wouldn't go out in it (pogoda taka, że psa by nie wygonił na zewnątrz). But in Germany we're busy wrestling with our inneren Schweinehund

('inner swine-dog'). The dog symbolises the weakness of the will that we are constantly fighting an internal battle against. However, in a previous life, a swine-dog would hold back the wild boar until the hunter could kill it.

The territorial behaviour of dogs is something that is reflected in the medieval tradition of placing money pots on the floor decorated with canine imagery, as the German expression auf den Hund gekommen

relates to (no money left means you come upon the dog). If you were broke, you had literally gone to the dogs. But with the Spanish word perra

('You'll earn a fat bitch for that!') is therefore an expression of semi-mocking approval.

Managers in business like to give the impression that they're looking for independent, creative cat-types to work with. But often what they’re really looking for is simply a loyal and frugal employee, since what they're actually offering is a dog’s life

. There's no need for employers and unions to fight like cats and dogs (in Polish:  życ jak pies z kotem). But it might be a good idea to adopt the same watchfulness as the porcelain or stoneware dogs that eye each other mistrustfully in many an apartment block entrance (in French: se regarder en chien de faïence

). In any case, in everyday life, as in the world of jobs, a general note of caution always applies: the dogs bite the one who is slowest to run away, (den letzten beißen die Hunde