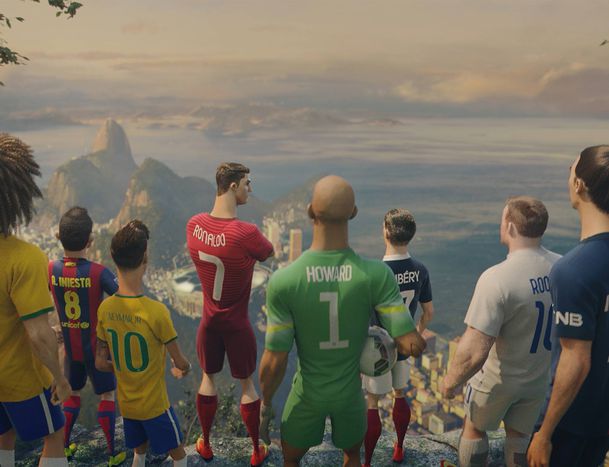 The players who currently sweat in the Brazilian football stadiums belong to the “Playstation Generation”. In the world of football obsessed with technique, players resemble all the more their virtual alter ego. Are videogames faithfully reproducing reality or is real football turning into a videogame?

Today, the best way to express your admiration for a football player like Lionel Messi is to proclaim that “he is like on PlayStation”. Understandably, even the professional football players themselves love to play on their console when they are not on the field. Some players are even convinced that by frequently playing on PlayStation they can increase their chances of being successful on the field.

With a first glance at the screen, today it is no longer possible to distinguish between a simulation and a live transmission of a World Cup game in Brazil. The facial gestures and movements of international football stars are now so realistically captured by the videogame manufacturer EA Games (FIFA), that at times the original players seem less ‘realistic’. Has today's generation of football players now become its own avatar? 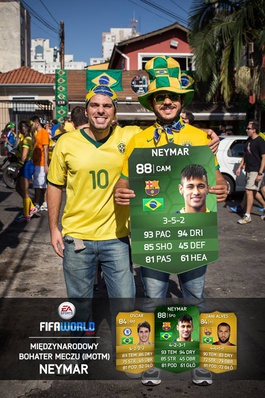 Sporting goods manufacturer Nike has recently released an amazing spot for the World Cup. In order to rescue football, Cristiano Ronaldo, Neymar, Iniesta and co. enter the field against the Perfect Inc. clones that "risk nothing" (as opposed to the Nike football players, who "risk everything"). The deal: if the originals lose against the clones, then the originals must vow never to play football again. In a dramatic match, the originals manage to ultimately prevail against the clones. The all-powerful puppet master of the clones, who looks like Steve Buscemi, is horrified. The whole thing would be a nice story with a happy ending, if Nike had not actively intervened with its marketing machine, ensuring that the football players became virtual beings. The American manufacturer dubbed Portuguese Cristiano Ronaldo with the name “CR7” – something that sounds like R2D2 from Star Wars. In essence, Nike is building clones itself, instead of defeating them.

Nike also apparently uses an invisible hand in the lineups of the teams it sponsors. Rumours relating to the fact that the company has sent out onto the field its own advertising icons against the will of the coach still persist. Who is the real puppeteer?

Back to Brazil: We could not believe our eyes during the opening match between the host and Croatia in Sao Paulo. Were these players wallowing to the referee for a challenge and rolling on the ground in super-slow-motion real? You had to take a second look at what was happening to understand that these were probably the players we expected to see in flesh and blood. The players were shown to us from all possible camera angles: the players’ facial pores had never before appeared so large, not even to those close to them. The game broadcasted was so hyper-realistic that the players seemed virtual.

Perhaps we are all trapped in Plato's football cave? Those players whom we believe to be real are only their virtual shadows. The idea of football is now only well preserved on clay courts, beaches and away from big stadiums.  At least that is what it seems.

SPAIN, thanks for failing!

World Champion Spain, has freed us of our fetters with its failure at the World Championships. The team that was crowned two consecutive times European Champion and once World Champion in 2010 had mechanized football to the extent that it became the embodiment of perfectionism. Whoever witnessed a match of the Spanish national team in recent years, could gain the impression of watching a team of clones. They coolly passed the ball between one another until someone found an opening. The game was transformed into something scientific, granting the team an aseptic aura. In order to gain their latest World Cup title, the Spaniards needed just eight goals in seven games. But that is no longer the case today.

In just two games, the tide has turned. The Spanish team was knocked off its pedestal by the Netherlands and Chile and was forced to unexpectedly begin its holiday early.  The Spanish case could certainly not be any more real: the downfall of a giant contrasted to the unexpected thrill of victory for the underdog. No-one wants to watch predictable and streamlined football as depicted in the Nike ad. Unpredictable moments and the victory of the opponents: the virtual football machine does not acknowledge the right of the weaker ones. It is time to put away the PlayStation.