Women comic writers: ‘Not only is gender equality not a reality, the act of demanding equality is itself criticised’

Following the scandal over the all-male award shortlist for the lifetime achievement award at the Angoulême comics festival in France, Autoras de Cómic – a Spanish female collective twinned with Collectif des Créatrices de BD – talk to us about the role of women in the world of illustration.

Illustrator and cartoonist, Andrea Lucio Sotelo is 34 and studied Fine Art at the University of Barcelona. In 2010 she was drawing comic strips which she explains, ironically depicted the violence of political decisions in a blog. A year later, she began collaborating with a newspaper as well as in various fanzines and online publications. In 2012, alongside the collective ‘Iaioflautas’, she created a comic based on her experience of the movement against welfare state cuts. She is currently working on a comic strip as well as other personal projects.

She tells us that she is interested by, ‘every story, perhaps specifically those which develop in contexts of change, rupture, conflict or contradiction, the difficult and particularly interesting part is knowing how to tell them’. She picks out Fiona Stamples and Emma Rios as some of her main influences yet she admits that, ‘it is difficult to talk about influence, anything can be an influence and it can transcend disciplines, they vary depending on the project and the right time without any need for a link in style’.

Irati Fernandez Gabarain – Irati FG – is 33 and she has been an illustrator for more than seven years. Two weeks ago she started working as a storyboard creator for an animation series. She studied Fine Art in Bilbao and illustration at the ‘Escola Massana’ in Barcelona. She is very interested in everything to do with visual narrative be it comic strips, illustration or animation, ‘I am fascinated by the art of being able to communicate ideas through images, I want to continue to draw and learn through drawing and creating graphic narratives’.

Irati FG and her friends manage a small publishing house called ‘Ediciones Armadillo’ through which they self edit their projects and publish a collaborative fanzine. When asked about her influences she says she has, ‘a load of them, maybe too many’, they range from Dave Mckean to Ben Shan, as well as Jillian Tamaki and Carson Ellis in terms of comic writers. 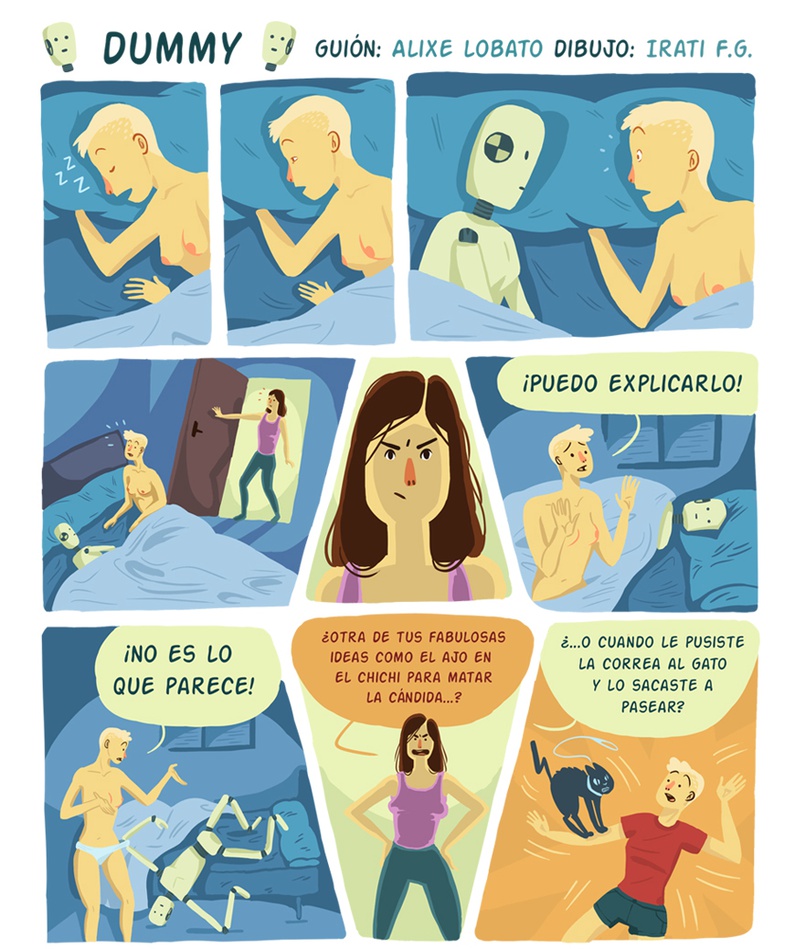 Both illustrators are affiliated to the collective Autoras de Cómic (AC) and agree that it is a very male-dominated industry in which female representation shines only because of the lack of it. Andrea Lucio states that male predominance has left and continues to leave many women behind. ‘If I ever get the chance of having some sort of visibility, it is never on the same scale as that of my male counterparts, it is thanks to the work of the numerous women who were undervalued and who fought so that the next generation can have better conditions’.

Irati FG on the other hand, points to the fact that there are many women in the artistic field, but that professional representation is scarce. ‘One has only to compare the number of male to female artists in art galleries or museums. Basically, no one is shocked by the fact that one gender dominates a whole profession and I don’t think that is fair or healthy for the individuals of a society or for the society as a whole’, she explains.

They also oppose labels such as ‘comics for women’ as they claim they carry an andocentric vision which portrays the work made by men as universal and that which is made by women as specifically for women.  According to Andrea Lucio, ‘those types of labels echo the fact that women’s position in the world of comics is yet to be normalised and serves to reinforce gender differences’.

When asked about the Angoulême comic festival row in France which resulted due to no women being shortlisted to its lifetime achievement award (Autoras de Cómic partnered with the collective Creatices de Bande Dessineé against sexism), Andrea Lucio says, ‘the lack of female representation in the world of comics is symptomatic everywhere and the situation in Spain is no better than in France. In fact, it’s often the case that not only is gender equality not a reality, the act of demanding equality is itself criticised’.

Similarly, Irati FG claims that it is a reflection of society as a whole and that the real problem is, ‘deeply widespread within our society, the Angoulême festival just happens to be more flagrant because in is an important event of a global scale’.

When Irati FG joined Autoras de Cómic , she admits that she had reservations, ‘for not being very aware and informed about the situation of women in various spheres of society, particularly in the world of art’. Yet once she became aware, she realised that if they didn’t do anything, ‘the future for female artists would not change as there will be no examples of female artists to follow and they will not be encouraged to join the artistic profession’. AC has taught her about feminism which in turn, has helped her both on a personal and professional level.

Autoras de Cómic emerged in 2013 out of a need to group together people who wanted to, ‘fight for real and effective equality in a traditionally male-dominated market such as the one of comic strips’. The association want to make it clear that they do not, ‘apologise for neither differentiation nor supremacy’, but rather seek to, ‘share an equal place in the world of comics’, where they are recognised for their work and not for their gender or sensibilities.

The association has been growing in numbers and is currently made up of more than a hundred professionals (including men). Due to the lack of official data, it is composed of a general list of both national and international female comic writers in the hope of giving them visibility.