A study by the European Commission has found that 27% of Europeans think sex without consent is somehow justifiable. 1 in 3 women in the EU over the age of 15 has experienced physical or sexual violence. These everyday occurences of gender-based violences seem to be more deeply rooted than we think. If this isn't a sign that work has to be done, I don't know what is. [OPINION]

It’s a Friday night and I have just spent four wonderful hours with a friend in Paris, my new home. Heading into the labyrinth-like metro tunnels of Bastille around midnight, I feel strong and ready to take on this new adventure. Turning a corner of the white-tiled tunnel, I see a man in his late thirties who's clearly drunk. Not thinking much of it I walk onwards to my platform but the distance of the tunnel suddenly feels insurmountable. I hear the man muttering suggestive comments in my ear and as I turn up my music and my pace, he persists. "Fous-moi la paix," I say, starting to get angry that I can’t revel in my positivity. My heart starts racing as I can feel his hot breath against my cheek, and I think of that awful rape scene in Gaspar Noé’s film Irreversible. After a minute or two, a couple shows up and they comfort me by saying "We are here if you need anything, OK? You can follow us."

When I tell some of my friends about this the next day, their response is that I should arm myself with pepper spray. But I cannot bring myself to compromise my daily habits, nor the way I carry myself, just because some drunken baboon decided it was OK to harass me.

A new research study was published by the European Commission recently in which EU citizens from all 28 member states were asked about themes relating to gender-based violence. These included domestic violence, probable locations of violence against women, sexual consent, physical and verbal harassment, and whether these issues should be illegal. Why is this important? Undoubtedly every woman in Europe comes into contact with at least one of these themes in their lives. 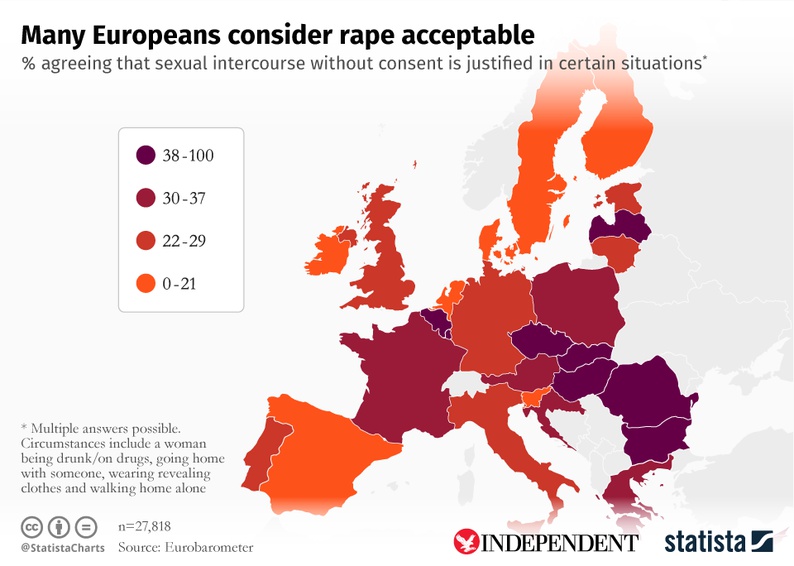 What is extremely striking is to see that culture has an immense impact on the general public opinion on a theme. Take sexual harassment, for example. 70% of respondents around Europe can agree that sexual harassment is a common occurence, but this ranges greatly from country to country. 89% in Italy believe it is common whereas in Estonia, only 32% think it is a real problem. What's more is that Eastern countries like Romania and Hungary are "consistently amongst the most likely to say that each situation [concerning sexual consent] may be a justification for sex without consent." Why do we turn a blind eye in certain parts of the continent, and not in others?

Then comes the problem of victim-blaming. In this case, the numbers really do speak for themselves. One in five respondents holds these views; 22% think that women are exaggerating when they speak of their experiences with harassment, and 17% believe that the woman has provoked this reaction. So walking through the metro tunnel at night listening to music means I provoked an uncomfortable situation?

Lastly, there is the issue of consent. When it comes to consent, the excuses are infinite. Whether it has to do with drugs or alcohol being involved, or the woman voluntarily going home with someone (meaning sex is implied), or wearing revealing clothing, or not saying “no” clearly enough or even fighting back… apparently a woman’s "no" does not hold the same weight when it comes to sexual consent. 27% of respondents believe sex without consent is somehow justifiable.

Here, let me womansplain that for you:

Animation Courtesy of Emmeline May and Thames Valley Police

Or just read this comic by Alli Kirkham.

At the end of the day sexuality is personal, and there can be no gender equality if we don’t change what some think is 'normal.' Understanding sexual consent and battling everyday harassment are fundamental first steps in changing a culture that, apparently, still considers many cases to be excusable.

My story is not a singular experience, nor does it come close to some women’s experiences which are far more difficult to hear. But it is the thought process here that is key. As a woman, my body does not suddenly belong to the public sphere as soon as I leave my house or the company of a friend. I shouldn’t have to change my ways. It is our culture that has to change, and these numbers are proof that there is still a lot of work to be done.