With great power comes great responsibility - or not?

Comment: The new Avengers-movie “Captain America: Civil War” got released at the end of April 2016 and critics worshipped the production so far. Nevertheless, some aspects of the screenplay remain questionable.

The movie starts with a scene in 1991 where the Winter soldier – a villainous assassin that became the sidekick of superhero Captain America and his last movie – steals some super soldier serum out of a car and kills the occupants.

Then, the actual plot starts: the Avengers, a troop of superheroes amongst which to be found Black Widow (Scarlett Johansson), Captain America (Chris Evans), Iron Man (Robert Downey, Jr) and Scarlet Witch (Elizabeth Olsen), are in Laos where they are meant to prevent a robbery of a biological weapon. While being successful in their mission as usual, they also create a lot of collateral damage and civilians die.

This turns the public opinion against them and the world’s head of states decide that this uncontrolled way of taking action everywhere would no longer be tolerable. Therefore, the United Nations wish to establish an international governing body to oversee and control the Avengers via the ‘Sokovia Accords’. The Avengers are forced to either sign the deal or retire.

This is where the Civil War begins: one side of the former team – headed by Iron Man and Black Widow – think it is reasonable to agree with the UN after all the damage; the other side – led by Captain America and his side-kicks – do not want their freedom to be limited by anyone, especially not a political organisation. But during the conference held in Vienna to ratify the accords with those that agree, a bomb explodes outside the building. A surveillance video identifies the perpetrator as Bucky Barnes aka the Winter Soldier, Captain America’s brainwashed friend.

Anyway, Captain America successfully proves how great he is in creating collateral damage by punching and probably killing numerous underpowered German police officers and crushing cars and helicopters in Bucharest for the sake of one single, ruthless, unstable assassin. As this turns out to be illegal, both of them get arrested. 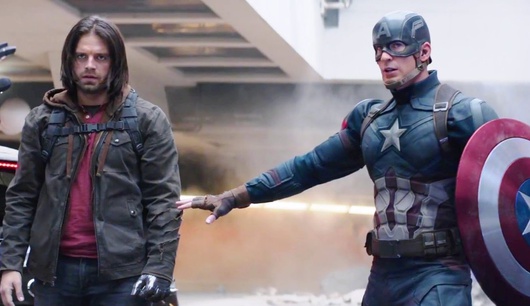 Then, another Instragram headline indicate the plot is to be continued in Berlin (Berlin gets to play itself!) where Barnes is held in a high-security cell. Captain America on the other hand gets a really nice pen bought for him by Iron Man who hopes the former might sign the ‘Sokovia Accords now’.

At the same time, the movie’s main antagonist Helmut Zuma (played by Daniel Brühl) who also triggered the bomb in Vienna to frame Bucky infiltrates the building where Barnes is held and speaks the trigger words releasing the Winter Soldier in him. Consequently, the Winter soldier escapes from the cell, takes everyone in the building down and tries to flee with a helicopter. His friend Captain America however manages to stop him and they both take a bath in the Spree (main river in Berlin) – sneaking away from the officials.

Barnes tells him about Zuma’s plan to wake up more Winter soldiers that are kept asleep in a Siberian Hydra facility until now. Immediately they follow him – but not without destroying the Berlin airport (actually it is Leipzig) when fighting against their former Avenger-allies who try to stop them. As Captain America has not told them about the waiting danger in Siberia, they are there to make him retire since he is not willing to sign the Accords.

Nevertheless, having the support of the other half of the former Avengers – amongst them the overpowered Scarlet Witch who actually could defeat all of them in once but somehow pretends not to for the sake of the scene – Barnes and Captain America manage to escape. Their supporters get arrested and captured in a high-security facility under the sea. Iron Man learns from them what Captain America is up to and follows them to Siberia in order to help them stop the awakening of more Winter soldiers. But when the three of them finally enter the hall with the sleeping bodies they discover Zuma already killed all of them with a bulltet to the head. It is then when he reveals his true intention why he lured the three into the facility: vengeance for his family killed as a consequence of the Avengers fight against Ultron in Sokovia in their last movie by tearing the group apart. He makes them watch a video of a traffic camera from 1991 showing the incident where the brainwashed Winter Soldier Bucky Barnes kills the occupants of a car who turn out to be Tony Stark’s (aka Iron Man) parents. Iron Man loses his mind and attempts to kill Barnes: “You killed my mummy!” As usual, Captain America protects his friend and after a long fight they destroy Iron Man’s suit together, leaving him lying in the facility.

The last scene shows Tony Stark in the Avenger headquarter reading an excuse letter by Captain America who justifies himself. At the same moment, one sees Captain America entering the underwater prison where his supportive side of the Avengers is held.

There is no doubt that this movie was directed very well and that the cast did a marvelous job. It is refreshing to see another plot than the usual superhero world-ending scenario. One can praise the screenwriters Christopher Markus and Stephen McFeely for how well they included so many characters and still portraying each of them with a personality. Numerous critics have pointed out it would have been the best Marvel production ever done.

Nevertheless, one could also wonder why a 250 million dollar production either forgot the explanation for or simply did not change the language of the police officers in Bucharest into Rumanian. Of course, it might be that the majority of the viewers cares very little about geography, regulations, authorities and it might have been easier do film it in German since they did in Berlin anyway, but the times where German forces simply walk into another capital and shoot someone at sight are fortunately over. How did they not see that? It is confusing from a European perspective.

It is equally confusing to watch a movie that is pointing to the many dead civilians as a consequence of the actions taken by the Avengers portray a more ruthless Captain America than ever. The men he beats and probably kills in this movie to save his friend Bucky are most of time not typically super powered enemies. They are more or less in the wrong place, at the wrong time when he wants something else than the wellbeing of citizens. Not everyone who watches the movie might see it that way – but especially the last scene of the movie hurts in this regard: Captain America walks through the entrance of the underwater prison where his friends are held – numerous bodies lying around them. These bodies might have been working in the facility, but clearly – since the movie’s purpose is to raise the topic of collateral damage – they were no more than people hired. In the 21st century, “long” after the Nazi’s and the Cold War, where Charismatic leadership is more difficult to maintain than ever, there is no such thing as a faceless, obeying army or a faceless population – masses that simply disagree or agree. People are where they are by choice, for a reason and there are reasonable laws that guarantee the maintenance of society – mostly for the sake of the economy.  But Captain America has not arrived in this world yet, he comes from and his mind stays in a world where there only is black and white.

So simple, and yet disturbing.

The movie seems to be taking his side: liberal and conservative. Who is called Captain America surely represents American values. But is that what superheroes stand for? What happened to: “With great power comes great responsibility” from Spider-Man? What is wrong with taking responsibility for your actions? In a movie where the question of responsibility is raised?

It is comprehensible that the character Captain America with his past experiences deeply mistrusts anyone but himself and he has never “been” of the reflecting kind – but that does not make the tone of the plot convincing.

The characters that join his team are a lonely teenager, a wannabe group member and his two sidekicks. That makes him the exact same type of charismatic leader he fears so much to be controlled by. He could have been the one that is further growing in this movie, who sets an example. Instead, he destroys Tony Stark.

Captain America could have been the character to discover that it actually takes more courage to trust again and to let loved ones go – not be selfish and to punch harder when you already have superpowers.

Taking his heroic self-convinced side however is a distraction from answering to the original problem.  What about the collateral damage? What about the normal people? The movie fails its own purpose.

The writers Markus and McFeely wanted the plot to be naturalistic and deep, but there are holes that leave too many questions. Sure, it is a breath-taking movie until the very last minute, but with the standards raised by the plot, it actually is the worst Marvel production ever.