Will there ever be a true „European identity” in the Balkans?

In the framework of cafebabel.com’s newest project ‘Orient Express Reporter’, the editorial team of Budapest invited all those interested in the EU-integration of the Western Balkans countries to a roundtable discussion on 5th May 2011. 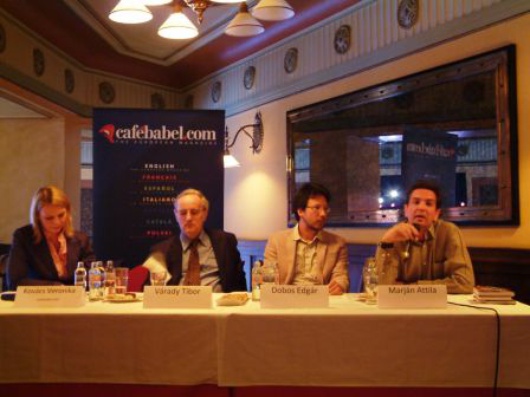 Around the roundtable were present Tibor Várady law professor at the Central European University in Budapest and former Minister of Justice in Serbia, as well as Attila Marján, economist, lawyer, political and economic advisor from Brussels and Edgár Dobos, historian expert of ethnicity, nationalism, nation and state creation processes in the Balkans, from Strategic Defense Research Institute (Zrínyi Miklós National Defense University, Budapest).

The moderator, lawyer Veronika Kovács tried to define the notion of European identity with the help of the invited guests.

“This is an old dilemma” – started Marján. According to the expert from Brussels the feeling of belonging to a nation will always be stronger in societies, that is why a unified European identity will never form. In the 2000’s in the countries waiting for the EU-accession, , like Hungary, there was an illusion of a European identity supposed to spread after the accession. However, the exact opposite happened: discouragement following the accession, disappointment and turning away brought the rise of nationalism. It is interesting that a similar process can be observed in Turkey too, where the dragging on of the negotiations has caused the decrease of enthusiasm towards EU-membership. “Unfortunately the EU couldn’t ensure a way with secure and quick solutions for Turkey, so the consensus regarding the European integration abated. It is a good question whether Europe can make itself attractive again to the potentially greatest power-to-be of the Middle East.”

The historian Edgár Dobos, who gained a lot of personal experiences during field trips in the Western Balkans, mentioned that in the discourse of „Balkanism” - an old Western view of the Balkans - although geographically the territory belongs to Europe, mentally there is a significant difference. The social integration of these countries stricken with ethnical tensions and incapable to process the memories of the war could be the biggest challenge for the EU. “I’m skeptical if it is attainable in Bosnia’s case.”

According to professor Várady, also member of The Hague International Court, war crimes trials could help the process. “The expectation concerning the legal actions is to do justice, to see and make others see as well.” This is an important stage in the process of acknowledging war crimes and it raises remorse in the society. The verdict in the middle of April convicting former Croatian General Ante Gotovina on first degree for 24 years evoked a storm of anger and at the same time it increased the anti-EU feelings of the Croatians.

The education of history and the collective memory also have a role in reconciliation – said Edgár Dobos. In Bosnia and Herzegovina’s case this is a serious obstacle for the integration. That is why the EU and the OSCE urge textbooks applying a multi-aspect approach. In reaction to the audience’s questions the lecturers touched upon the dangers of ethnicity-based politics. It is a problem that the Bosnian constitution - that came into existence as the 4th appendix of the Dayton Agreement - records the political representation of ethnical groups. According to Várady, without the modification of this constitution, European integration is not possible for the country. “The complexity of Bosnia and Herzegovina’s state apparatus is also clearly shown by how the European Commission handles in two different dossiers the negotiations with the two Bosnian political entities, the Federation of Bosnia and Herzegovina and the Republic of Srpska” – said Dobos. Marján added: apart from the fluid statehood, the absence of a common language is also an obstacle for the formation of a pan-European identity, bringing up the slowly disintegrating Belgium as a negative example.

The goal of the Orient Express Reporter project, apart from the on-the-ground reports done in the Balkan countries and Turkey, is to speak about the situation of these EU-candidates and potential members and the feelings fostered towards their future accession in the member states. At this debate in Budapest, we focused on Hungary’s southern neighbours also because it is one of the Hungarian EU presidency’s priorities to support the EU-expansion in the Western Balkans. As a conclusion we have to admit that unfortunately we know little about the recent history and the current identity crisis of the states of the former Yugoslavia. Although Hungary is already an EU member state, with regards to European identity it may well find itself facing similar complex historical and political dilemmas.