Will the constitution be more humane when it comes to migration?

For several years now, the right to asylum, visas and the control of external borders have been a European Community competence. Will the European constitution reinforce the free movement of people? 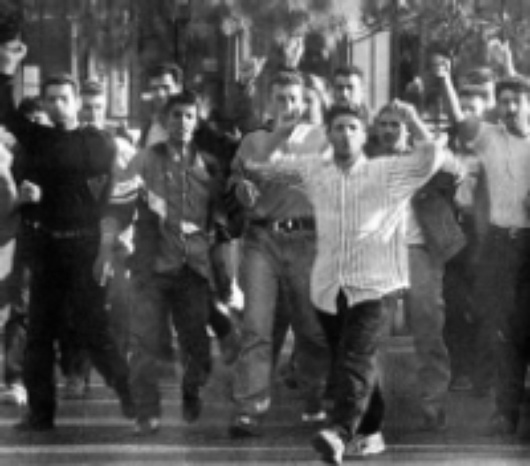 In March 2005, 124 clandestine immigrants washed ashore on Lampedusa, an island to the south of Sicily, were unceremoniously deported to Libya by the Italian authorities. This move was carried out in accordance with an agreement signed between the two countries in September 2004. Non-governmental organisations (NGOs), however, stepped in to denounce the way in which the people were dealt with. If the constitution is adopted, would such measures be legal? The document is still based on the often uncertain distinction between ‘real’ refugees, who are fleeing racial, political or religious persecution, and ‘fake’ asylum seekers, who wish to enter the European Union to improve their way of life. The aim of the Treaty establishing a constitution for Europe is to meet the security demands of the EU member states, whilst respecting European values on human rights. Will the treaty succeed when it comes to asylum and immigration?

The constitution is the not the first document with such ambitious, and sometimes contrasting, goals. In 1985, the desire to create a European area without internal borders led to the Schengen Agreement. Originally signed by just five countries, there are now 15 signatories: 13 EU member states (the pre-enlargement 15 minus the UK and the Republic of Ireland), Norway and Iceland. The agreement came into force in 1995, allowing the signatories to adopt common regulations on visas, the right to asylum and the control of external borders. The aim of the Schengen Agreement was to promote the free movement of people. At this stage, questions of asylum and immigration were dealt with through intergovernmental cooperation. Above all else, each member state wished to retain autonomy over the thorny issues of asylum and immigration. However, the Amsterdam Treaty in 1997 marked a turning point. Following pressure from NGOs, immigration and the right to asylum entered under the jurisdiction of the EU. This treaty states that fundamental rights (as set out in the European Convention on Human Rights and the Geneva Convention) form part of Community law.

The idea of offshore centres outside the EU to deal with asylum applications took shape during the Tampere summit in 1999. The EU directives that were adopted after this received much criticism as, more often than not, they simply satisfied the lowest common denominator, rather than making any real attempt at harmonisation. In the meantime, and following the 9/11 terrorist attacks, European policy has moved from asylum and immigration to the fight against terrorism and illegal immigrants. What mechanism within the EU institutions enabled this U-turn? Quite simply, the principle of unanimity, which guides the decision-making process in the European Council. This principle accords each member state the right to lodge a veto, thereby keeping the drafting of directives to a minimum. Among other aspects, it is here that the constitution could really change the current system with a switch to qualified majority voting.

Finally, some rights for asylum seekers?

Through the constitution, the EU is aiming to “develop a common policy on asylum”, and thereby limit agreements that involve only a few countries. In order to achieve this, border control, the fight against illegal immigration and social protection for migrant workers’ would greatly benefit from extending the qualified majority voting process, which would prevent plans being blocked by a single veto. Agreements with non-EU countries are also referred to in the consitution in a clause stating that they can help in “managing inflows of people applying for asylum or subsidiary or temporary protection”, a clause that is contested by NGOs. However, the single most spectacular step taken by the constitutional treaty is that the second part includes the EU Charter on Fundamental Rights. In particular, this Charter mentions the right to demand asylum and bans collective expulsion (articles II-78 and II-79), rights that were not respected at Lampedusa. If the constitution is adopted, the Charter will receive the legal status it has so far been lacking. Therefore, if the Charter is contravened it will be possible, hypothetically speaking, to bring the case before the Court of Justice of the European Communities.

However, the constitution also states that “rights recognised by this Charter [on fundamental rights], for which provision is made in other parts of the constitution, shall be exercised under the conditions and within the limits defined by these relevant parts” (article II-112). To put it clearly, the Charter will be applied, but under the stipulations set out in the third part of the European constitution, which is devoted to “the efficient management of migration flows [...] and the prevention of, and enhanced measures to combat, illegal immigration and trafficking in human beings” (article III-267). The advances made here concerning the rights of asylum seekers deserve attention, even if they are restricted by the migration policy of the EU. It is the way in which the text will be interpreted that will determine the situation of asylum seekers. Therefore, even if the constitution is adopted, similar deportations to those seen at Lampedusa could happen in the future.