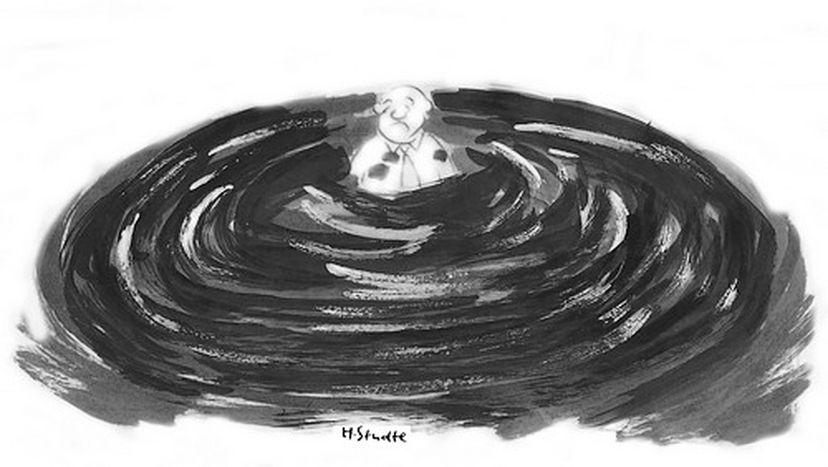 For as you make your bed, so you must lie on it, goes the laconic message behind German playwright Bertolt Brecht's Threepenny Opera. And it's no four-poster bed we're talking about, if in France you land dans de beaux draps (in beautiful sheets). He who, on account of an all too risqué private life, was only admitted to Mass en beaux draps blancs (in beautiful white linen), in fact found himself in a rather uncomfortable situation. For this supposed weiße Weste (white waistcoat), and the clean slate it represented, was actually meant to make visible the dark sides of his moral conduct.

Today, someone dans de beaux draps is in a proper dog's dinner, or in the German expression, richtig im Schlamassel (from the German 'schlimm', or bad, and the Yiddish 'masol', or star). The word sounds like some rather sleazy business – it simply means, however, the awkward circumstances prevailing when one's life is currently under a less 'good star.'

Those led astray by such a star may well find themselves caught in a quagmire. Similarly, in the Netherlands, someone might be seen – in the Dutch equivalent of the English – in het moeras zitten.

All in all, thick liquid substances represent a certain danger – not only for those 'white waistcoats.' While a German, when he's having bad luck, in der Tinte sitzt (sits in the ink), the French like it a little more appetising: the wretched French soul sits dans la panade (in the soup) or alternatively dans la purée. In England, too, soup (to be in the soup) and for afters, jam (to be in a jam) are on offer. Italy even offers some fine vol-au-vents: he who has fallen nei pasticci is also not far from il casino (essere in un casino, (literally, 'to be in a brothel', meaning in a shambles).

Should it become a bit too close for comfort in there, one may find oneself again in die Klemme geraten (caught in a tight spot). This same experience has also been had by many a Pole, who gets it from both sides: by w tarapatach ('tarapatach': clamps or locks).

Under such circumstances, one soon ends up in der Patsche (in a jam), and now the 'white waistcoat' gets really grubby: straszenkot, as the Grimm Brothers' German Dictionary reveals, is (like everything one steps in) particularly apt to squelching, or patschen. The Englishman knows this only too well, having landed himself in a mess. Incidentally, to suffer such misfortunes you don't even need to be some kind of Tollpatsch (klutz), or in the Hungarian, Tolpaz, who trips over his own clumsy feet. Still, since seventeenth century Hungarian soldiers were named as such because of their wide soles, one suspects that one or two of them landed in the soup.