Whispering behind the scenes: Interpreters at COP21

Participants in the world climate summit came from all corners of the globe. Representatives from more than 190 countries and as many languages were present in Paris, bringing to mind the Olympic Games. However, the most athletic job at Le Bourget was not performed by politicians but by simultaneous interpreters. Portrait of a athlete sprinting between two languages.

Benoît sits in a box of coarse chipboard wearing a suit and tie. Out of four windows he can see the backs of conference participants. He is connected to the them via headphones. He has been translating French into English and back again for a quarter of an hour, emphasising his words with gestures. Seen from outside the booth it resembles a mixture of sign language and a silent film.

On stage in the French Pavilion the speakers are debating sustainable agriculture and climate neutrality. Despite the tropical temperatures in his little interpreter's booth, Benoît keeps his cool: “I focus on the content of their messages – not on the words. The rest is done using my short-term memory.” 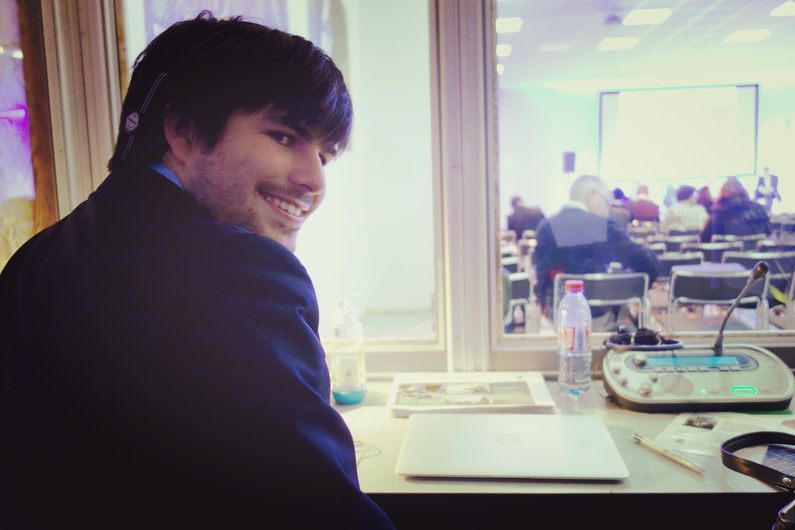 Benoît has been engaged in this high-performance linguistic sport for two years now, every day refuting the old cliché that the French are unable or unwilling to speak English. When he was 17 years old he spent a year Down Under, as a student in his early twenties he did the same thing in the Emerald Isle. At 26 years – with a Bachelor's degree in English and a Master's degree in translation under his belt – he now features on the list of official translators for the French Ministry of Foreign Affairs. Hats off!

Although he has relatively little professional experience, he has already had opportunity to prove his versatility. Once, a company hired him for a meeting on parquet flooring, a different enterprise needed his services for a conference on methods of breeding salmon.

His preparation for the COP21 consisted of three days' intensive research. Since the negotiations started he has been translating up to 3 conferences a day, “With a necessary amount of adrenaline,” he smiles.

Interpreters usually work in pairs – though sometimes as a trio – taking turns every 30 minutes. When they are not speaking they are noting down numbers and complex or abstract concepts to aid their fellow interpreters. “Indirectly we help to change the world.” Benoît says proudly. He is right. Without communication and translation there would not have been a new UN climate agreement.

Still his ego doesn't rise above the rooftops of COP21. In spite of the responsibility resting on his shoulders, Benoît remains modest: “As an interpreter I act in the shadows and try to speak as fluently as possible for the participants. If I do my job well it means I stay invisible.”