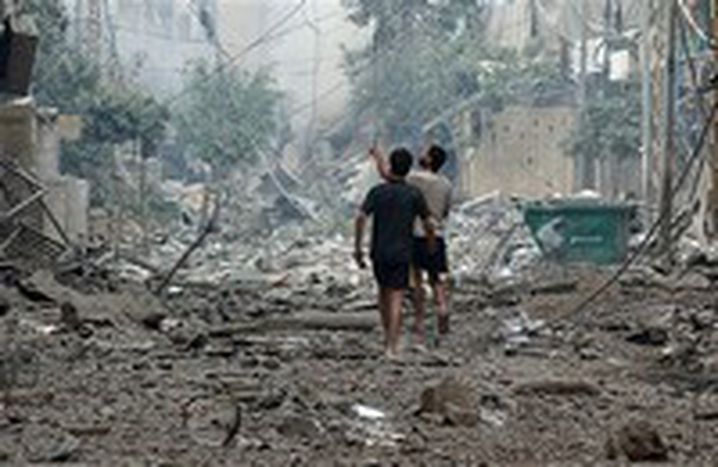 While we sit and watch

Everyday sees further victims. Israeli tanks on the Gaza border bomb the only power station. An Israeli settler is found dead in Ramallah. 26 deputies and 8 ministers of the Palestinian parliament have been arrested by Israel. Militant Palestinians continue to shoot Qassam missiles into Israeli territory.

Bombs falling in the night

The upsurge in violence has occurred at a crucial juncture in Palestinian politics.

The upsurge in violence comes at a something of a bad time. Three weeks ago it looked as if the Palestinians were willing to compromise. After weeks of negotiations the Hamas government and the Fatah party of President Mahmoud Abbas had agreed on a joint course of action.

Both parties signed the “Prisoner’s agreement” which calls for the establishment of a Palestinian state within the 1967 borders and so implies recognition of the state of Israel.

In addition to this, the EU had resumed aid payments to the Palestinian people, payments which had been stopped after Hamas’ victory in the January elections. This decision by the EU was also brought about by the massive deterioration in the situation of the Palestinians over the course of the past months.

The situation in Gaza is particularly dire. Since the Israeli bombardment of the electricity plant, there has only intermittently been electricity in the Gaza Strip. The hospitals are hampered in their work. The water supply also only works when there is electricity. At night the bombs can be heard falling. The fear that friends or family will fall victim to one of the aerial attacks is omnipresent.

Too little, too late

The international community looks on helplessly as the Middle East edges to the brink of war. The UN Commission on Human Rights simply issued a statement saying Israel’s attack broke international law. Europe was unable to even agree on a united statement on the matter. States who are traditionally more critical of Israel, like Finland and Ireland, have tried to get the EU to clearly condemn Israel's military actions. However, states that traditionally support Israel, like the UK and Germany, have refused to condemn the Israeli violence.

The EU has at least found common ground in one matter: the civilian population needs help, urgently. The hospitals in Gaza need to be supplied with petrol so that they can generate electricity. This is the first concrete support measure to which Europe can pledge itself says Foreign Affairs Commissioner Benita Ferrero-Waldner. The Europeans have pledged a total of 105 million Euros for hospitals, schools and infrastructure. It is not enough, but it is a start.

An end to the conflict between Israel and the Palestinians seems a long way off. The more violently Israel attacks, the more soldiers will be kidnapped by radical Palestinian groups. As things stand at the moment, peace in the Middle East is not a realistic hope, it is a utopia.