Where did the Greek MP's find all that millions???

I do not know if you have seen the list regarding the property of Greek MP's but I wonder as a citizen, how all that money entered into their pockets? Do not rush to mark this question as ''populist'', but I really can not understand how so many members of the Greek Parliament have been found with 1.5 million dollars minimum in their deposits or 40 properties ..

Certainly it is good that they are going to be taxed on those amounts, but these numbers in a period of crisis arent they provoking the people? 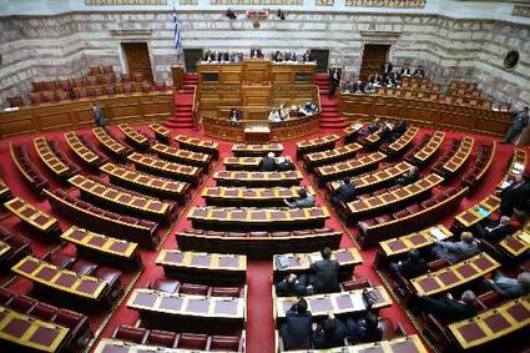 Where is everybody?? Probably at the cafe of the House,for coffee tea and sympathy!

Isnt it provocative for a body that is completely non-existent in physical and political terms? Let me explain: The Hellenic Republic has three powers, one legislative, one executive and one judicial. What is the role of the legislature where the members of the Parliament are punished if they do not follow party discipline? I cannot find a greater insult to the parliamentary system than this so called ''party discipline''. Members can not control the government nor oppose to it. A typical Greek vote ends with members of the governing party to vote for the bill and opposition MPs to vote against. There is rarely a meaningful political dialogue, since usually no one is there. Oftenly I watch the channel of the House and the spectacle is depressing .. rarely you can see one hundred members at a time (out of the 300!!!). Only when they vote for the budget you can see the hole body together!

The so much hated (sic) US have made surely an enviable body of legislation which is independent from the executive power and is the main body of legislation in the country. The Congress there is not a hostage of any government .. and before telling that I am pro-American, let me remind that our great grandfather Aristotle was the first who pointed that when the three powers intervene to one another and are not independent then the state is doomed ..

I wonder again: an average MP with a 100.000 salary per year (approx.), who has for example 3-4 properties and deposits of 1.5 million euro (and if you see the list you will see that there are many such) can not refuse to take his whole salary for the two-three years of the so cursed (sic) Memorandum? If you get 50.000 fewer oh dear MP for three years the state would save 15,000,000 per year.

And to get even more populist: if those 15 million were invested in the market which so desperately needs cashflow e.g. in the form of VAT refund then who would blame the political system for failure and irresponsibility? Who would not see an apportioning system in a failed state that all we set up?  This would be primary, a moral justification; why should the retired pay the bill all the time?

But of course, MPs are mirrors of our society .. and the unsuspecting writer asks who whould do the same if their shoes here in Southern Balkans's Colombia (as journalist George Tragkas oftenly says)..