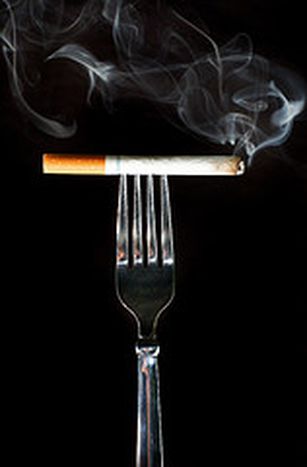 When will Europe be free from tobacco smoke?

Written by Bea Aranyi Long ago smokers could smoke anywhere they wanted to and non-smokers had no rights. Smoking was allowed everywhere, indoor, outdoor as well as on public transport. The media was full of indirect and direct tobacco advertisements, there were tobacco posters on the streets and people learned the habit from each other.

Nowadays the European Union takes control of it, and fighting for a healthier world became one of its most important projects. 5 million people dies all over the world in diseases connected with heavy smoking. Without any changes in habits and politics this number can double in 2020. In the European Union smoking is still the top cause of death. Every year 650 000 people dies in diseases connected to this bad habit.

In Hungary this number is 30-40 thousand and altogether around 3.5 million smokers lives in the country, but this habit is still considered as a private matter. 35% of high school students are regular smokers.

Resolving this problem is not easy. People have been educated and get used to smking after living decades in a free word they have their rights. Sometimes they don’t even know that smoking wasn’t their own choice, rather caused by the manipulation of the social environment and lack of information.

At first the EU tried to widespread some information. In 2005 a campaign for smokeless life was initiated, which aimed to reach the youth to avoid smoking. It contained programmes in schools about the unwholesome effects of smoking and consuming drugs, there were posters on the street trying to warn smokers to the damage caused in their bodies (lungs, teeth, nails, skin, etc.) but without any effect, because finally smokers usually got angry and lighted up a cigarette to get calm.

Disappearing of tobacco advertisements from the media was only partial. Tough there is no more official tobacco advertisements on television and newscasters stopped smoking on the screen, in the movies you can still see sexy heroes lighting up a well deserved cigarette with his girlfriend after saving the world. Simply because it belongs to the territory of the author’s autonomy.

In shops, it became forbidden to attend customers under age 18 with tobacco and on the boxes appeared texts about smokers health damaging but none cared. Leaving the rest to the communication strategy didn’t do too much. So the EU started to minimize spaces where smokers and non-smokers has to be together. The strategy has been changed, now non-smoking space is the preliminary, and usually the smoking area is limited.

Since 29 March 2004 the Irish Government has implemented a ban on smoking in the workplace in Ireland. This means that from that date smoking is forbidden in endoor working places in the country. This includes office blocks, various buildings, public houses/bars, restaurants and company vehicles (cars and vans). Other countries joined it’s example. The ban on smoking in public houses/bars, restaurants caused the protest of the owners since they were afraid of loosing their customers. There was a heavy protest in Spain, Greece and Italy, where smoking in restaurants was like national habit. Nevertheless people doesn’t quit hanging around restaurants, bars, cafes and surprisingly, non-smokers who are in majority in the EU can also fill these places and they are very grateful for the smokeless environment during work and free time.

For the time being in Hungary passive smokers can only wait patiently, hopefully not for long now. As a member state of the EU we should have progress in this matter. The ODE (Hungarian Smokeless Union) tried for years doing something with not much financial background. In 2007 the European Commission published its Green Paper entitled "Towards a Europe free from tobacco smoke: policy options at EU level". Tough according to the document smoking should have been forbidden in office blocks, various buildings, public houses/bars, restaurants and company vehicles even in playgrounds and underpasses till 2009, in most of the member states nothing had happened. In Hungary supposedly because the government failed to make through the health reform and was afraid of pissing off the smoke orientated voters. It is also another subject that our politicians do not treat seriously: despite being prohibited many had been witnessed to smoke on the Parliament’s corridors.

Actually smokers do agree that restrictions in work, in the office are good and necessary, but for the free time places they find it hard to accept. Especially hard for a youth to understand why he or she can’t smoke in an open-air playground, it is considered as violence against their freedom.

Among those who travel a lot opinions are variable. Some doesn’t like that they get the smell every time after sitting in a bar, and appreciate those who leaves the place when smoking. But others consider that having a cigarette with coffee while sitting in a bar is still a little peace of heaven and bless Hungary for allow this pleasure.