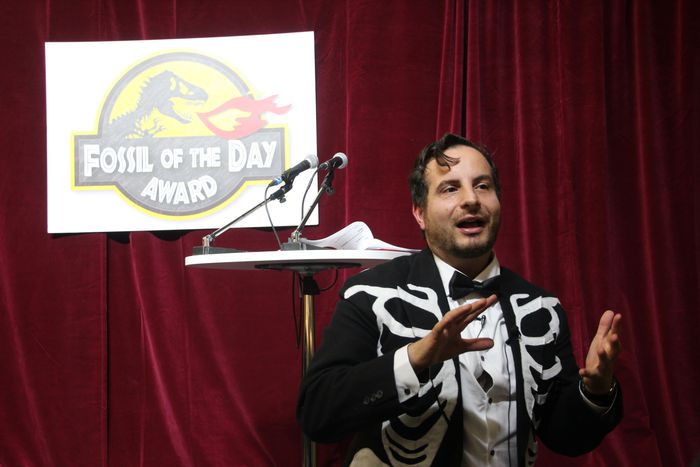 When Belgium gets ridiculed at COP21 : a Fossil of the Day Award story

Every year, during the COPs, the NGO Climate Action Network hands out daily the Fossil of the Day award that aims at pointing the finger at countries performing the poorest climate wise. On the first day of the COP21, Belgium was awarded the recognition as CAN believes that «Belgium is the perfect example of what a rich industrialized country should not do when it comes to climate».

How does a European country in line with the European Union’s ambition regarding climate and with such renewable energy potential get ridiculed at the most important climate negociations of the decade, you may wonder. Well, it’s quite simple.

First of all, as Wendel Trio, director of Climate Action Network Europe said : "For the last six years, Belgian leaders have been wrangling on how to divide its climate and energy targets among different parts of the country. Their only concern is to pass the buck to others".  Indeed, up until last week and since 2009, Flanders, Brussels and Wallonia as well as the Federal government  had not been able to agree on the distribution of climate efforts for the period of 2013-2020, even though these negociations initiated in 2009, following the vote of the «Energy and Climate Package» by the European Union.

In October of this year, an agreement had been found between the four environment ministers before being rejected by the Flemmish and Federal government as charges were too high for Flanders.

It was therefore, without any agreement that Belgium showed up at the COP21, proving once again that the complexity of its political system can have disastrous effects on its international participation.

However, it was with great surprise that last Friday, the 4th of December, in the middle of the Paris’s negociations, the four ministers finally agreed on the burden sharing for the 2013-2020 period. The agreement deals with the reduction of GHG emissions, the production of renewable energy, the auctionning revenues of CO2 quotas, and the finance for climate and enables Belgium to have a clearer view of what lies ahead.

2. A lack of commitment

However, Belgium was also named Fossil of the Day by CAN because of its lack of comitment when it comes to ambitious climate policy.

Indeed, according to the European Environmental Agency, Belgium is one of the few european countries who risks not reaching the European GHG emissions reduction targets by 2020, making it one of the worst students in the European school.

Moreover, Belgium is far from what is expected from a European nation regarding financial support to developping countries to adapt to climate change consequences.

While at the beginning of the COP21, Charles Michel, the belgian prime minister commited to giving 50 millions euros per year until 2020 to developping countries, this is exactly the same amount the government committed to in 2009 at Copenhaguen, showing no sign of increase participation in climate finance. Moreover, this sum comes from the national budget for foreign aid which is already being cut down every year, making the feasibility and the coherence of such decision questionable.

Finally, Belgium seems rather reluctant to get on the train of renewables. While most of its european counterparts are committing to increase considerably their share of renewably produced energy, the government just decided to extend the lifespan of the nuclear reactors Doel 1 and 2 that had been put on hold after security concerns.

This decision might sound surprising considering that Belgium has significant potential regarding renewable, especially offshore wind energy but only plans to reach 13% of renewable energy  by 2020.

As CAN host for the award ceremony puts it : « that’s not going forward, that’s going backward ».