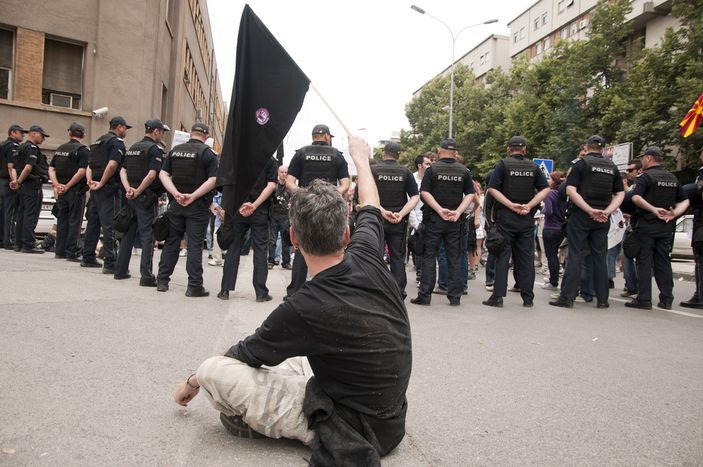 What on earth is going on in Macedonia?

Something is stirring in the Macedonian capital Skopje. Protests and counter-protests, a wiretap scandal, corruption and police brutality.

Ivo Bosilkov breaks the situation down for us:

Macedonia is fucked up. In short, this is the Western public’s opinion on the Balkans, and in general it is an accurate description even when you’re not familiar in detail of what is going on down there in Europe’s proverbial ghetto.

It’s too complicated, shrugs the ‘civilised’ (unlike the Balkans) world. “People simply hate each other, there’s nothing that can be done about it, so why bother going into specifics?” grudgingly concedes the patronising West. All we can do is watch how they find new reasons and ways to hate each other, and marvel at it.

Today, the Balkans is bad, again. However, like in comedy, sometimes a joke can be so bad, that it is actually good. Unfortunately, to understand the joke, you need a bit of those specifics that Westerners fret about so badly.

These days, it’s Macedonia’s turn in the endless cycle of the Balkans’ powder keg relay. Since March, the leader of the main opposition party Zoran Zaev has been publishing wiretapped phone conversations between government officials, leaked by a whistleblower in the secret services.

The talks have revealed a range of already suspected malpractices by the government of Prime Minister Nikola Gruevski, from the direct editorial control of the media by the ruling party’s elite, to electoral fraud organised by party-consumed state institutions, and lucrative personal gains of top politicians in shady deals.

Discontent exploded into chaos as protestors clashed with police on the streets of Skopje after disclosure that the Internal Ministry first tried to cover up the death of a young man brutally beaten by a policeman, and then absolved the higher echelons of any responsibility.

After that, things went from bad to worse. In the midst of the biggest political unrest since Gruevski came to power in 2006, a 24-hour battle occurred in the city of Kumanovo between the police and a group of heavily armed Kosovo Albanians, with less than clear motives and a suspicious background. The aftermath was eight policemen dead, and a nation in fear of a repeat of 2001, when the insurgency of Macedonia’s Albanian minority put the country on the brink of a civil war, with the circumstances eerily similar now.

This is just a factual recollection of events. The real conflict in Macedonia is the dramatic, hateful polarisation between the schizoid paranoia that Gruevski is systematically feeding the masses, and the desperately faltering hope that the institutions will again belong to the people instead of the party, that corruption and clientelism will be eradicated and that values like media freedom, social equality and rule of law will be restored.

But schizoid paranoia is a powerful tool in the hands of a master manipulator. Gruevski’s narrative that the country is under attack by foreign services, who are using it as a pawn in geopolitical games, is eagerly swallowed up by nationalists, already skeptical towards the ‘hypocritical’ West after years of blocked Euro-integration due to a dispute with Greece.

Earlier this week, they flocked to a party-organised rally, held as a response to previous mass anti-government demonstration, without a clear purpose, except to show that, well, they can. Some firmly believed that the opposition wants Macedonia’s collapse and not Gruevski’s, others were coerced into showing up, just as they are coerced into voting due to their employment in the administration; and this was all in a fenced area designed to increase turnout perception. By Macedonian Twitter users, it has been branded, symbolically for the whole country, Nikola’s Cage. 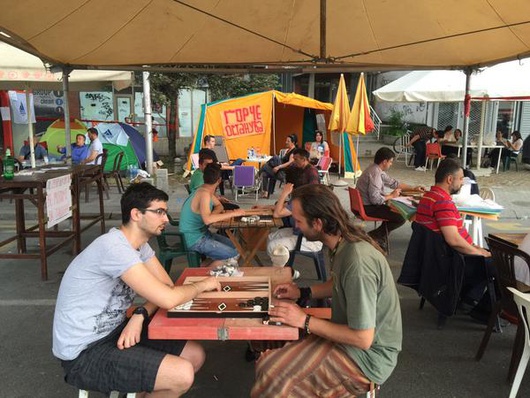 And this is where Gruevski’s attempts to present the two opposing ‘options’ as equally legitimate reach their comedic climax. As hundreds of anti-government demonstrators set a camp to occupy the area in front of the Government until he resigns, government supporters set their camp in front the Parliament. Their demands? Nobody knows, not even themselves!

It’s a theatre of the absurd, the final stage of a bizarre counter-protest phenomenon orchestrated by Gruevski. Twitter again responded with mockery - if the opposition camp starts playing bass, will the others play contrabass?

Humour is the only appropriate reaction, and for a bunch of EU puppets, the opposition is pretty funny. Gruevski’s supporters though, enlightened enough to see the West’s ‘destructive scenario’, want Macedonia to distance itself from European conspirators, and get closer to Russia. In a way, it already has. In Soviet Russia, government protests against you, as the Russian reversal goes. With Gruevski’s methods, more communist than communists themselves, Macedonia is actually starting to look like Soviet Russia. Much propaganda, lots of poverty, no freedom. Like I said, it’s pretty fucked up.