We should have been proud of it

The Hungarian youth is not satisfied with the new Constitution Written by Linda Krajcsó, translated by Mária Ballai After 11 months of work and 9 days in the House of Parliament the MPs adopted the new Hungarian constitution. From the 386 MPs the socialists and the liberals boycotted the vote so the new fundamental law was passed with 262 votes in favour, 44 against and one member abstaining.

According to the Chairman of the House this represents the end of the transitional period lasting from 1989 until now, and the last 67 years. Cafébabel Budapest also takes part in the numbers war: we have asked the opinion of 50 young Hungarians and we got 8 answers. 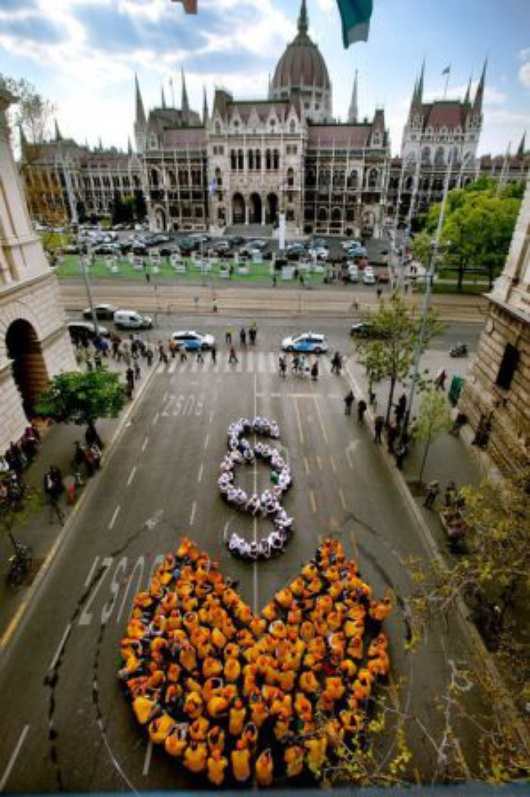 The Hungarian youth is apolitical. Not only the number of the respondents shows this but their inactivity in the demonstrations reflects the same. The “One million for the liberty of the press” Facebook group that was formed against the media law announced a Pac-Manization action on the day of the voting, and they specifically awaited people under 35 to turn up on it. The point of this was that in the moment of the adaptation of the new constitution people forming a Pac-Man and dressed in Fidesz-orange (the colour of the governing party) would eat a section mark (formed by people dressed in white) representing the state under the rule of law. They expected 500 people but only 100 showed up. Cafébabel asked the organizer Róbert Fölkel’s opinion who considered this successful. “We have seen a lot of youngsters and we have many young fans on Facebook. Pac-Manization was intended to show the government that even this age-group dares to speak its mind and to say that something is not right.” Later he elaborates: “This was a spectacular event and we wanted the videos or photos taken of it to go round the world”. Out of the 8 respondents one participated in the demonstration. Axel (23) who is a future economist would have gone but he did not have time for it. “In the last 9-10 years it was now that I felt the most that I would go out on the streets and tell my opinion about this wrong direction we are heading towards.”

Ask and I will (not) answer

The Hungarian government sent every voter a personal letter in which they asked their opinion about several articles of the constitution, but 6 out of 8 of Cafébabel’s respondents agree that the constitution process did not involve social dialogue. Axel considers the government’s attitude the “we have decided, we will push it through even if we die of it” type. “I am a white-collar worker but I did not understand the questions” – complains Eva (32), a girl from Budapest with Slovakian origins. Rita (29) works at a communication agency and is studying to be a Spanish-Hungarian translator. She immediately threw the letter out and preferred to tell her opinion in a referendum. 900 thousand people returned this letter to the government and that is how the extra right to vote for people with children was not included in the constitution, while actual life imprisonment managed to do so. On the whole our respondents welcomed the fact that Hungary will have a new constitution. Klári (24) stays out of politics but she is friends with Viktor Orbán on Facebook. “I am happy that something is finally happening in this country, Hungary is finally in the news. I do not know exactly what other countries think of us but we are the subject of conversation at last.” Nelli (25) who is in the advertising business did not follow the constitution process either, because “Orbán and his crew have a scandal every week, I am tired of keeping up with it.” Since the adaptation of the new fundamental law she has read some articles in this topic and as she says: “I was wondering what will happen later, but come on, as long as I am not concerned directly, I don’t really care. And now that I can do nothing, there is no point in rising against it”. On the other hand David (27), the political scientist thinks that “it feels like having an octroyed constitution, like the one we got from the Habsburgs in 1849 after the fall of the Hungarian revolution. It seems like that the pretty good communication and PR from the government’s side and the quite butter-fingered opposition could lead to a constitution that might’ve been a sweet dream for some power maniacs who wanted to leave their fingerprints in history. Even though all this could’ve (and should’ve) been a real triumph of the whole country.” Bori (26), the journalist finds the fingerprint metaphor quite adequate. “First of all, there is still a crisis, and we should not deal with the constitution now. That is why I consider it a rushed pseudo-politics that only communicates that the government tries to get into history books. ”

Rita did not read the constitution because “I couldn’t really find it on the internet”. That is why she read the Spanish and German press. The details that worry her the most about the constitution were only found in Hungarian mediums. According to the Section of Linguistics of the Hungarian Academy of Sciences the legal terminology can lead to false interpretation because punctuation marks were mistakenly placed in the text because of the special syntactical features of legal jargon. For example the quotation from the Hungarian national anthem was not placed between quotation marks, so the “God, bless the Hungarians” can be regarded as a legal demand. However we can be proud of our constitution being the first one to be created on iPad anyway which was not meant for writing because of the touch-screen. Rita also tells us that the first translation of the constitution was missing parts that could have led to questions in the EU. For example the article about the prospect of actual life imprisonment was not translated, neither was the so called National Creed Preamble that declares Hungary a Christian state. This is the very part Eva is so furious about. “The new Hungarian constitution begins with the alteration of history. 100 thousand Jews live in Hungary, here is the biggest Central Eastern European Jewish community”. She trusts in civil initiatives.

The European Parliament the new Hungarian constitution at the end of March. Representatives wanted to know whether the constitution will correspond with the European fundamental values and whether the European Union keeps an eye on the Hungarian events. On the day of the adaptation the German foreign minister declared that the new Hungarian fundamental law adds further questions to the ones in connection with the media law. On the following day the Hungarian deputy prime minister these questions up. The new fundamental law will take effect in next January.