Want to bring down a tyrant? Just call OTPOR

After Georgia came Ukraine. Having brought down the Milosevic regime in 2000, activists previously involved with the Serb movement OTPOR are exporting non-violent revolution. But will Europe keep ignoring them? 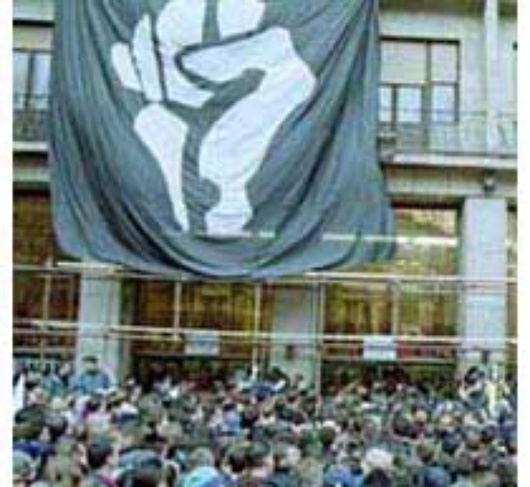 The demonstrations in Kiev’s Independence Square, which took place in temperatures below zero, did not come about by accident. For the outgoing Ukrainian President, Leonid Kuchma, OTPOR (Serb for ‘resistance’) has become something of a nightmare. Just as they did during the anti-Milosevic revolution, groups of Serb activists have been living in Kiev and Minsk for months teaching (non-violent) revolutionary lessons to dozens of young people who are fed up with the corruption and oppression of the regimes in their countries.

It all started in Budapest. At the beginning of 2000, police on the Serb border noted an unusually large number of young Serbs apparently visiting the Serb monastery Saint Andrea in Hungary. In reality, they were all going to the Hilton Hotel in Budapest where a retired American colonel was training them in the most advanced techniques of non-violent action, founded on the Gene Sharp doctrine. Milja Jovanovic, who accepted the first MTV Free Your Mind award on behalf of OTPOR, recalls the European Union’s subdued response to OTPOR’s requests for help: “fill in the form and send it to Brussels. We will reply within six to eight months.” In contrast, the necessary resources to open 70 bases for the movement throughout Serbia arrived from America within two weeks. OTPOR, with Serbia as its first target, chose the black closed fist as its symbol, a parody of the old Bolshevik symbol so loved by Milosevic. It began its struggle with a campaign against the law which gave the government control over universities and information. It was a struggle based on the ideology of non-violent individual resistance and included posting almost two million stickers hostile to the pillars of the regime: the police and the army. A few months later, Milosevic’s regime fell.

Today, OTPOR exists in a different form as some of its activists joined the Serbian President Boris Tadic’s party, while others created the ‘Centre for non-violent resistance’ which exports the Serbian path to democratic revolution abroad. Aleksander Maric is Foreign Affairs Secretary for the new organisation. He trained members of the KMARA (‘Enough!’) youth movement, the Georgian organisation which led the ‘rose revolution’ against Shevardnadze He also spent months, together with hundreds of independent observers co-ordinated by the American NGO Freedom House, training PORA (‘Now is the time’) activists in non-violent resistance in view of the crucial presidential elections in Ukraine. PORA, without supporting either Yushchenko or Yanukovic (the Ukrainian presidential candidates), has broadcast news live from Kiev’s Independence Square to the West hour by hour, and has helped activists scattered throughout the country exchange material and gather proof of electoral irregularities.

PORA’s yellow flags were the most noticeable on the carpet of snow which covered the square but they were ignored by the European Union, just as they have been ignored for 13 years by the democratising forces in Ukraine which continue to negotiate ‘partnership’ with Ukraine to avoid the sticky question of full EU membership. The tremendous strength of the ardent supporters of OTPOR in Serbia, KMARA in Georgia and PORA in Ukraine has also gone unnoticed. The next goal for these ‘professional revolutionaries’ is the Belarus elections in 2006, elections which could sweep away Lukashenko’s regime, the most autocratic and isolationist of the former Soviet empire. But does the European Union share this goal?