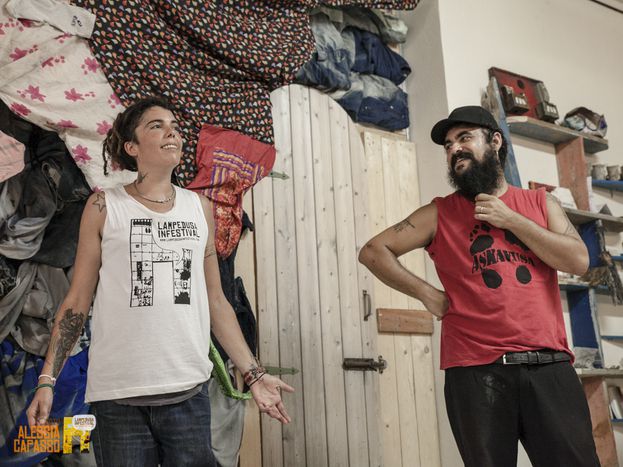 The Voices of Lampedusa series continues with interviews of people who have first hand experience or knowledge about the consequences of European policies on life on a small island in the Mediterranean.

The Askavusa collective is made up of Lampedusans, and also people from other parts of Italy and Europe, with members in Brussels as well. Founded in 2008 to protest the creation of a CIE (Identification and Expulsion Center) on the island, the collective has progressively widened its scope and struggle. From migration to the national and international issues involving Lampedusa over the last 20 years, the collective has developed its own experience, giving it a broad and radical perspective on migration that goes beyond mere narrative and extemporaneous rhetoric. A few months ago, Askavusa published Lampedusa. Instructions for Use, a report reconstructing a broad-based vision of the issues facing the small Southern Mediterranean island and providing evidence for the connection between migratory policies and militarisation.

Cafébabel interviews Giacomo Sferlazzo, a Lampedusan artist and singer-songwriter as well as activist with the collective.

Cafébabel (CB): On Lampedusa, the media have always connected periods of extreme pressure on inhabitants with the presence of numerous migrants. You have made known that the most constant and significant presence on the island over the last few years has actually been the military. What does it mean for such a small island to have such an imposing deployment of armed forces?

Giacomo Sferlazzo (GS): It could mean many things depending on the person's perspective. For an innkeeper, whose business is always full over the winter, it could be viewed as a positive thing. For us, it implies being complicit in aggressions against countries we should be dialoguing with. At certain periods of the year, it means living in an open air barracks. For us Lampedusans, it means having 10 radars on a land mass of a few square kilometres and a tumor rate higher than the national average.

CB: How do you believe the Triton operation will impact the lives of Lampedusa's inhabitants? What has changed with the Mare Nostrum operation?

GS: We can no longer think of our lives as being divided from the lives of others and from what's happening in the Mediterranean or in Europe. We have now seen almost everything but we expect that the CIE will go back to being used it was in the past and unfortunately, I fear the creation of another 'emergency,' I don't know of what this time, but surely related to immigration with all that implies in terms of politics and media exposure. 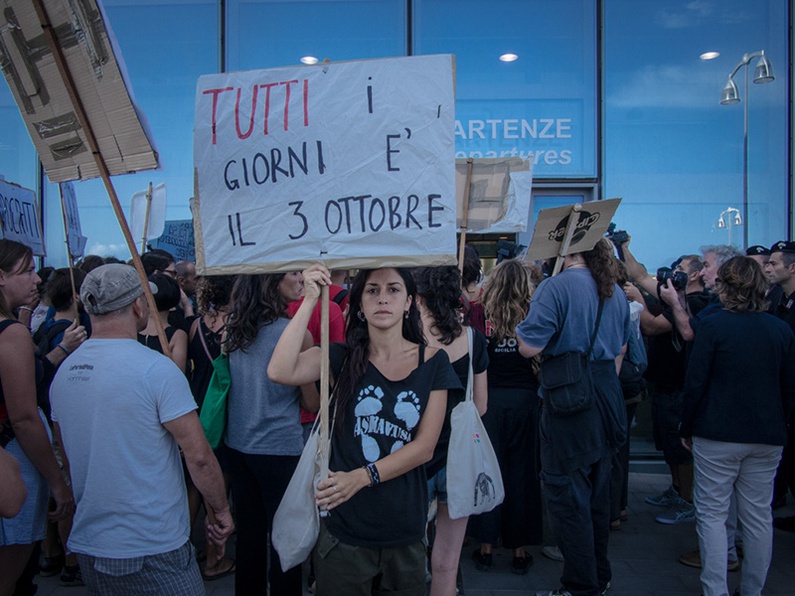 CB: You have harshly criticised former European Council President José Manuel Barroso, during his visit right after the tragedy on 3 October 2013, as well as European Parliament President Martin Schulz, occurring during the anniversary of October 3rd this year. What is causing you to condemn European migration policies?

GS: We completely challenge European institutions' economic policies related to the euro and the balanced budget which have increased states' debt, forcing the weakest classes to pay while enriching the banks and capitalists. If we look closely, the crisis is affecting the weakest as the rich become even richer. Services and labour rights have been reduced while unemployment has increased. As for foreign policies that view Europe as an extension of the USA, the installation of MUOS (Mobile User Objective System -- Ed.) is the latest in a series of impositions that has seen Sicily colonised by American and NATO military apparatuses. We are opposed to arms production and sales by European states. And finally, we challenge Europe's history of colonialism, enslavement, worker exploitation and imperialism.

CB: In the report, you denounce the role of the media in its portrayal of migration, in particular the one in the public eye, like on Lampedusa. You speak of the 'mass mobilisation' of emotions. What are the limits and negative effects of this narrative? 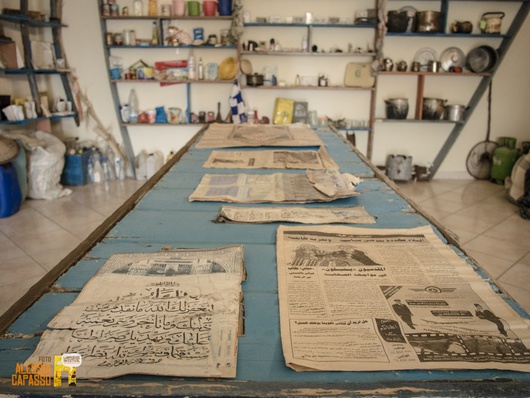 GS: It's difficult to say, but today more than ever, there is an in-depth need. Immigration is a complex subject that is difficult to address in a few lines. Perhaps journalists should push to go in-depth on certain questions, furnishing tools to readers and reference points adapted for analysis. There are many limits of a narrative that concentrates on emotions but in general, if you position a human being in a purely emotional sphere, it becomes much easier to condition them. Not that emotions are not important, but rather, more often it's easier to condition a person through emotions and instincts, especially if there aren't valid arguments in political and philosophical terms.

CB: Alternatively, how can journalists help the public and readers understand the dynamics of migration?

GS: Journalists should not live by the day, but take more time and space to investigate and try to have a broader vision of things. Migration specialists are the ones doing the most damage, by concentrating on one thing and losing perspective on the entire framework.

CB: In your opinion, what is the 'entire framework' that should be included in migration policies?

GS: We are saying that it is strictly linked to military policies and that very often military spending and choices are justified by the emergencies or shipwrecks stemming from the movements of migrants. We believe that Europe benefits from operating migrant centres, places that profit off the backs of these people and the inhabitants of the places where they are being set up. We believe that the management of migration, as we know it, ensures undocumented, exploitable, extortable and underpaid labour. Millions and millions of euros have been spent over the past 20 years to militarise borders and penalise migrants who, in the best of cases, find themselves in a situation of assistance entrapment that offers them not a shred of dignity or self-determination.

CB: What alternatives are you proposing, that could work not only in Italy, but also elsewhere in Europe?

GS: To resolve the issue, one needs to start with the causes of migration. But we must remember that individual action is not enough within this economic system. Without overcoming capitalism, with all its cultural connections and implications, any laws on migration would be ineffective. Immigration, as we know it, is indispensable and inevitable with this economic and political system. It is the nature of capitalism to need to expand, consume territory, consume resources, always needing more, to need slaves not workers. We certainly have some specific actions in mind. For example, not permitting either the financing of wars nor the destabilisation of countries for economic interests, outlawing the production and sales of arms.

In regards to migration, humanitarian corridors should be opened to those fleeing warfare or conflict situations with regulation of air and sea travel in the short term. In general, foreseeing a European employment visa and abolish the Dublin Accords. We are for the abolition of any type of migrant centre, while assisting medical structures already in existence. On our territories, it is necessary to adopt environmental policies that protect the land and enact work and housing programmes that can provide autonomy and dignity. 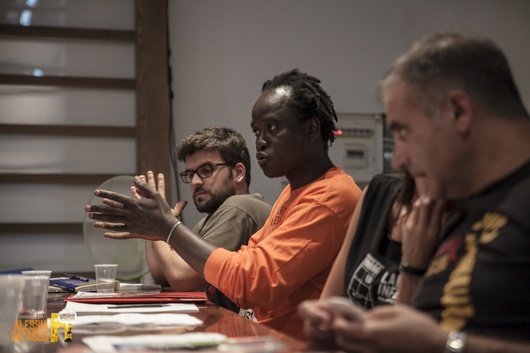 CB: The Lampedusa in Festival gathers contributions from various parts of Europe. This year, you have fostered initiatives that came out of the collaboration between Europeans and refugees and migrants, such as the Zurich Independent School, il  Berlin Cucula Collective and Lampedusa in Hamburg. Soon you'll be back in Zurich hosting Rote Fabrik. What difference can dialogue among small national communities and migrants at the European level?

GS: We believe it would be useful to speak with those who pratice alternative solutions and are seeking ways out of this economic and cultural system. It would be highly useful and even wonderful and fun to travel. It could be useful to tell the story of Lampedusa that is impossible to hear or see on the news. We believe that each community has its own dimension, with its own contradictions and specificities, but that the crucial themes are common and that they can be sources of inspiration from one to another. For now, we're going to Europe because it's Europe who is calling us and because we're building many great relationships, but our political perpective is the entire Mediterranean.

CB: Do you believe that  the local community's experience of political struggle and resistence can be transferred on a wider scale?

GS: We are trying to understand this, as we receive so many proposals for collaboration, but we often say no, especially when it starts off with mega projects, without getting to know each other and gaining experience with the little things, like making a meal together, writing a leaflet or banner, organising a small show or, more simply, just talking.

*Among Askavusa's activities is the Lampedusa In Festival, an internazional exhibition of documentary cinema and culture dedicated to learning about each other, and Porto M, a self-managed space hosting a permanent display of objects recovered from the Lampedusa landfill belonging to the migrant women and men who have landed on the island. From 12 - 14 February Zurich's Rote Fabrik will host Askavusa, as part of the Lampedusa In Festival programme, and a selection of objects from Porto M at Lampedusa in Zurich.

This interview is part of the Voices of Lampedusa: a series dedicated to those who live, study and talk about the island of Lampedusa. Read here the first interview with journalist Antonio Mazzeo.