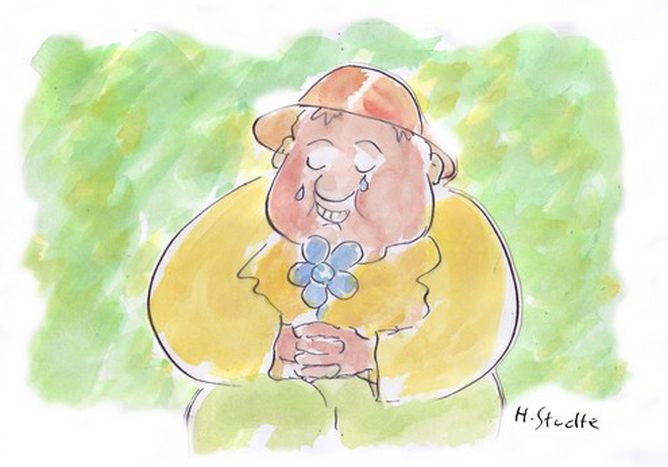 The words The End appear onscreen, and your heart, as big as a watermelon, is palpitating. Men and women who like to cultiver la petite fleur bleue ('cultivate their inner blue flower'), be assuaged: this weakness, this sweet, guilty foolishness is shared across Europe by many a heart on legs.

We owe this expression to the young German writer Novalis, who died at the age of 29 (sniff sniff). In his unfinished novel Heinrich von Ofterdingen, written in 1811, he tells the legend of a medieval singer who leaves to search for an ideal, and happens upon the blue flower, a symbol of poetry, there at his feet, delicately rooted in the fertile earth.

You can be a poet without being moved by a long drawn-out kiss in the cinema. Fans of popular romanticism, the incurables, are often referred to in Germany as rührselig ('to have a touched heart'). The blue colour remains, but it is that of the eyes which give people a foolish tinge, makes them look a little bit of a silly billy, as in the German expression blauäugig ('to be blue-eyed').

On the other side of the Channel, it isn’t tears but cheese that run; someone who is cheesy likes to be a bit lovey dovey. Music, maestro - we go on to play the violins. Over to Iberia, the Spaniard who spends too much time with his nose in a Mills and Boon book is often called a novelero, someone who believes they are living their life in a novel.

Listen to the original phrases