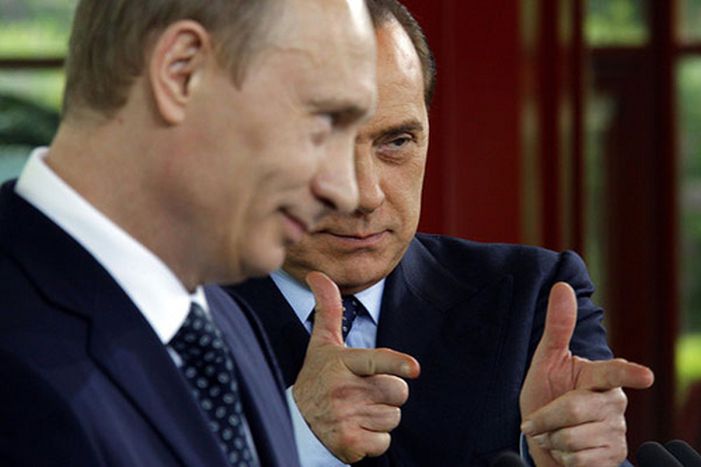 The relationship between EU leaders and the cameras is often an unstable one. It is a way of gaining huge popularity. But it can also bring out the worst side in the leaders - or, to put it simply, display the arrogance of those in power

Berlusconi and the machine gun ‘pow’

How to reply to an outspoken female journalist who is enquiring after Putin’s relationship with famous gymnast Alina Kabaeva? Berlusconi, as usual, not bothering with niceties, points his fingers at the journalist, if he was firing an imaginary machine gun, and a sense of subsequent embarrassment fills the room. This gesture is particularly significant given that Moscow has a notoriously problematic relationship with the press

Nicolas Sarkozy unveils the salon de l’agriculture (annual farming convention) in Paris. In front of television cameras, he shakes the hands of the crowd with his usual fixed smile. Suddenly something goes wrong; an old man refuses, obviously angrily, to shake his outstretched palm. Its all too much for the French president, who calls out ‘ Casse-toi, pauvre con!,’ (Piss off, you bloody idiot!), as he moves on. A crude gesture which has provided a constant source of entertainment for the young and old alike in France.

A day before the French president takes the six-month rotating chair of the European Union. Sarkozy is debuting as a host on French television channel France 3, enters, settles down and greets a technician. The latter doesn’t seem to respond. The French president waits for a reply. He is firstly polite but becomes annoyed, makes a slight remark about the lack of manners made worse, according to him, given the public character of the show. The two decide what subjects are to be covered on air, so that Sarkozy is prepared. In the history of the fifth republic, it is only the second time that a practising president has been the host of a television programme - judging from this, it is probably better that it stays that way!

November 2002. At the EU summit in Brussles an annoyed Putin responds to a question posed by a journalist from France’s Le Monde, who seems to criticise him over the Russian war in Chechnya. Do those who criticise anti-terrorist tactics necessarily support fundamentalists? Putin goes further, suggesting that the unfortunate journalist should go to Russia, a multifaith country with many faith, in order change religion. He even proposes to find him a specialist who can circumcise him!

Amongst the many gaffes made by the Romanian president, who could forget the ‘tiganca imputita’ incident. In May 2007, after having confiscated the mobile phone of a Romanian journalist who was trying to interview him outside a supermarket, Traian Basescu, who didn’t realise that the call was being recorded, described her as a ‘stinking gypsy’. The incident caused a scandal in Romania, in spite of the official excuses from Basescu, claiming that he was under pressure due to the vote on his re-election that was happening at the time. Here is a video of some of the president’s best gaffes.