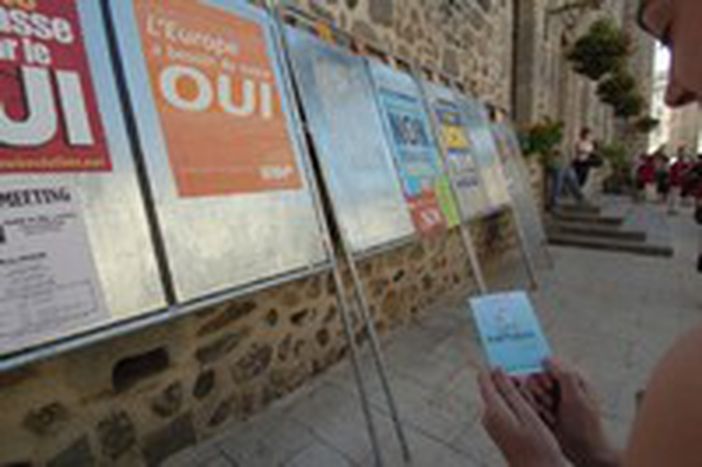 After the French, the Dutch are next in line to vote No to the constitutional treaty. Not for the same reasons, but in the same spirit.

“France is the first country in the European Union to reject the European constitution” headlines the Internet site of Le Monde. Whether you share the joy of the No camp, which was the clear winner with almost 55% of the vote, or the disappointment of the mainstream party leaders, who had all been in favour of a Yes and lamented its failure on French television screens, it is necessary now to look to the next step of the ratification process: the referendum in the Netherlands on June 1.

It is practically sure, if the polls are anything to go by, that a resounding No will be heard this Wednesday in the land of Tulips. It is estimated that between 60 and 63% of people will vote against the constitution, and yet all the main Dutch political parties are, like their French counterparts, for the Yes. But unlike in France, where voter participation reached 70%, only 40% of Dutch are expected to take part in this referendum. Moreover, their reasons for rejecting the constitution are very different. While the French, according to a poll by Ipsos, primarily rejected the text because of “the bad economic and financial climate in France” and fears that the constitution was too economically liberal, the Dutch will do so because of their discontent with the euro, fear of losing their sovereignty and the entry of Turkey into the EU.

Both the French and Dutch motives for voting No are thus hardly in keeping with the No campaign’s idea of a “No of hope”. Without passing judgement, it is possible to deduce that the French and Dutch No, despite their differences, are proof not of a common hope but of a similar defiance. Not towards the constitutional text itself but towards national leaders, in whom the public no longer has any confidence, and towards the EU, which they judge to be (and not without reason) incontrollable and at the root of all their problems from delocalisation to immigration. In the same manner, the Spanish Yes in February was more an expression of faith in the future of European construction than a plebiscite for the treaty.

Political frivolity, conservatism and the temptation of withdrawing into a national shell seem to be dominating what must be considered as an old Europe, where growth is pitiful and unemployment is rife. This Europe is falling to pieces because it has not found, in itself or the construction of the EU, a political project to give it back its faith in the future. And it is not the smallest of paradoxes that the French, and soon the Dutch, will have deliberately chosen to put an end to their best chance of reinventing and re-opening themselves, of uniting with other countries who can help them out of their apathy.

All that is left to hope for is that the leaders of the No camp in Europe have a plan B that is better than the constitution and which will allow Europe to progress. Let’s give them the benefit of the doubt. But if they don’t find a way to do so, Europeans could become a species in danger of extinction and the frontiers, which took so long to bring down both physically and mentally, will be rebuilt.

Published May 30 2005 in the section Caffeine