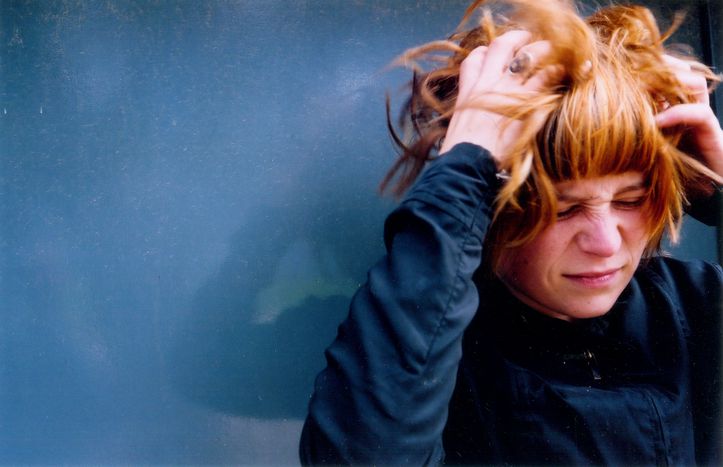 In the run-up to the London Mayoral elections on the 5th of May, London renters have been sharing their horror stories of overpriced and unacceptable properties in the capital. Organised by the Generation Rent association, the campaign hopes to keep the housing crisis as a top priority for whoever emerges victorious on Thursday.

This Thursday the 5th of May, British Londoners and other EU citizens resident in the city will vote to elect the new Mayor of London, along with the members of the Greater London Assembly (GLA) – a devolved governing body composed of political representatives from the 32 boroughs that make up the Greater London area.

The next Mayor of London will most likely be a either the Conservative, pro-Brexit candidate Zac Goldsmith, or the pro-EU Labour candidate Sadiq Khan. Though the full roster includes 12 candidates including representatives from the Green Party (Siân Berry), UKIP (Peter Whittle), the Lib Dems (Caroline Pidgeon), Respect (George Galloway), and the Women's Equality Party (Sophie Walker).

While the electoral debate is focused on a diverse range from issues – from the EU referendum to job creation – there is no denying the fact that the main topic of debate is the housing crisis, which has been pushed to the top of the political agenda by the struggles of social housing movements such as FOCUS E15. 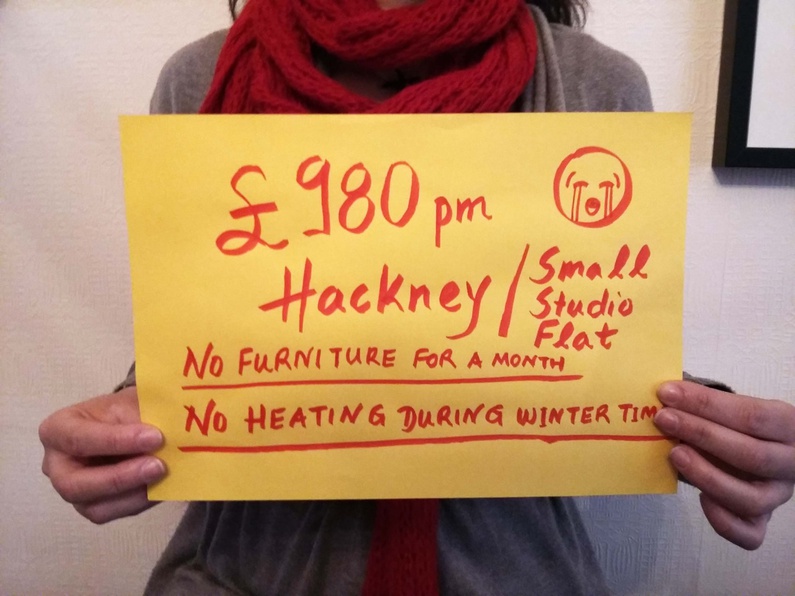 Generation Rent, a London-based association focused on changing the way renting works in the capital and across the country, has launched a Twitter campaign on the 26th of April using the hashtags #VentyourRent and #RantyourRent (which emerged a day later), inviting renters to share their negative rental experiences in pictures.

The campaign quickly went viral, with a massive number of stories and pictures shared on social media. Among the campaign's organisers are Paolo Gerbaudo, Director of the Centre for Digital Culture at King’s College London, and Dan Wilson Craw, Policy and Communications Manager at Generation Rent.

Wilson Craw explains the idea behind the campaign: "The idea for the hashtag was to get London's private renters thinking about their housing situation ahead of the Mayoral election. For the first time, housing is at the top of the agenda, and we want people to realise that the next Mayor can start fixing the housing crisis." 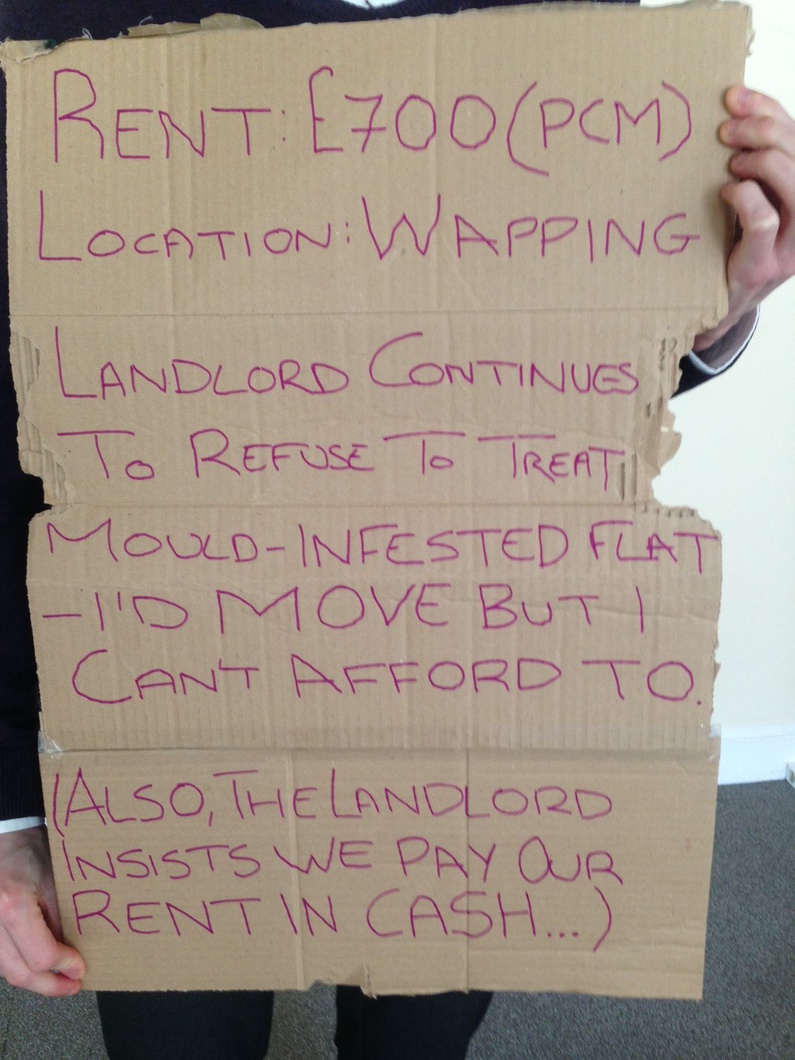 While the housing crisis affects every part of the city, East London boroughs like Hackney, Newham and Tower Hamlets are widely acknowledge to be at the centre of it.

Wilson Craw elaborates: "East London is right at the heart of the London housing crisis. Rents are rising rapidly and regeneration projects are taking place – and private tenants are not protected from either of these. Stronger rights for tenants would go a long way to stop communities being torn apart.

"The Mayoral candidates have already made pledges to improve renting, and we will put pressure on whoever is elected to keep their promises. Much of their success depends on how much power they can take away from Westminster so I hope we'll be campaigning with the Mayor to get that power." 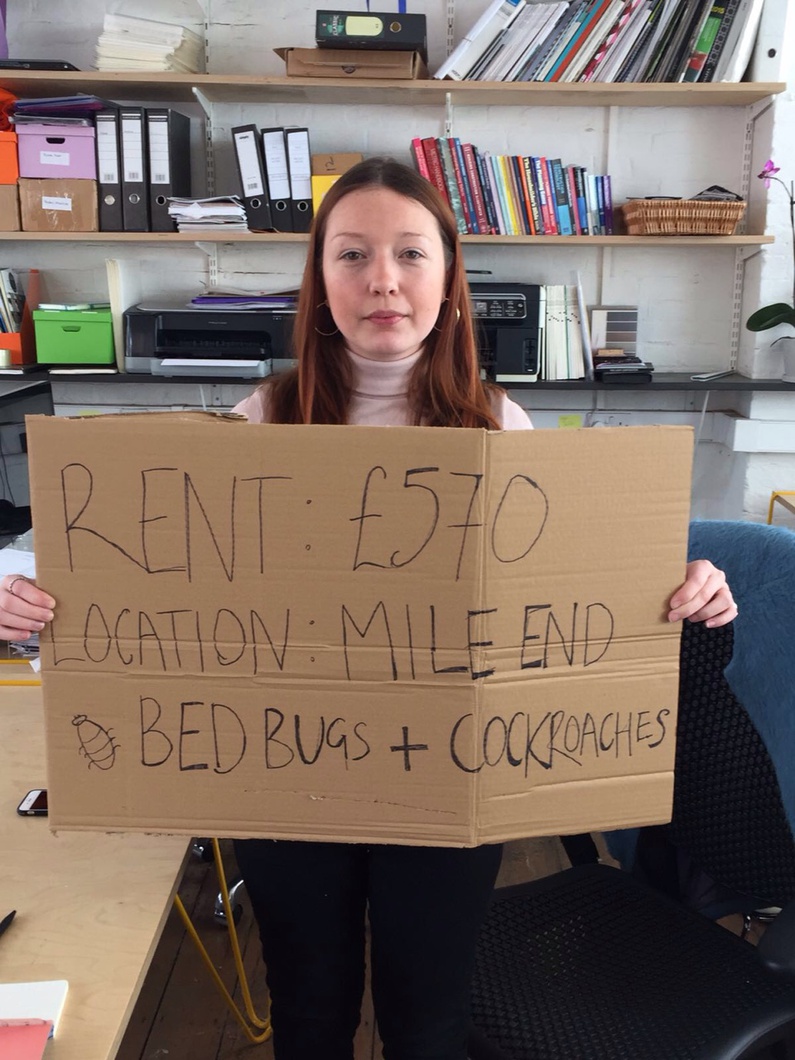 When it comes to the campaign's next steps, Wilson Craw concludes: "We'll continue gathering and sharing stories, and housing campaigners will be protesting next Tuesday [the 3rd of May] against the government's Housing Bill. But what happens next is really in the hands of London's 2 million private renters, who form the biggest tenure in London and could decide who runs the city."

London renters interested in sharing their stories of horrific rental experiences can tweet their pictures with the hashtags #VentyourRent and #RantyourRent, and keep updated on new hashtags and initiatives by following Generation Rent on Twitter.