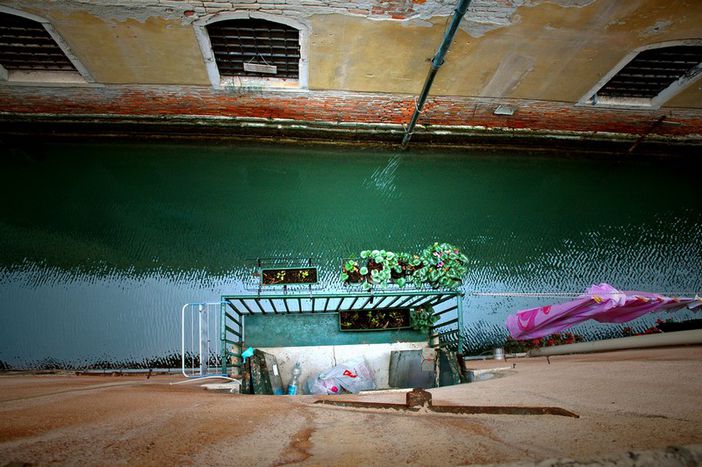 It is slowly sinking, its residents are leaving. The world's media are claiming that Venice’s end is nigh. American environmental information website Mother Nature Network even includes Venice on its '10 places to visit before they vanish' list. But the reality is more complicated

On 14 November 2009, Venetian pharmacist Stefano Soffiato had his fifteen minutes of fame when photos of the funeral he organised for Venice made their way into European newsrooms. While insular Venice flowed beneath the doorsteps of its 60, 000 residents, several boats transported a pink coffin along the Grand Canal right up to City Hall, accompanied by funeral orations. Surprised tourists looked on.

On 9 January this year, it was Arrigo Cipriani’s turn to make the six o’clock news. Cipriani, the owner of Harry’s Bar, a stone’s throw from St. Mark’s Square, announced his intention to file a collective complaint against several Venetian institutions, including the port authority, accusing them of having worsened the high tides with their work. Admittedly, the distinguished clientele of Harry’s Bar do need to put on boots more and more often in order to be able to visit the restaurant…

On 13 January 2010, minister Renato Brunetta, an official candidate for Venice’s City Hall, confirmed that he wanted to 'give Venice the international dimension that she deserves, to bring her back to the pomp and splendour of the sixteenth century when she was at her finest'. While we wait to see what measures Brunetta will put into place to resolve the causes of Venice’s decline (for example, the discovery of America by Columbus, the 'circumnavigation' of Africa by the Portuguese, the consequent development of new commercial routes and the decline of the Mediterranean), one could ask whether it’s necessary to compare modern Venice with the Venice of five centuries ago.

In the past, the rhetoric of Venetian decadence at least inspired some great artists: for example, British poet Lord Byron inthe 1812 poem Childe Harold's Pilgrimage ('A thousand years their cloudy wings expand/Around me'), and Thomas Mann ('Death in Venice', 1911-1912), or French painter Monet's 1908 visits to the northern Italian capital… In 1910, Filippo Tommaso Marinetti, the champion of Italian futurism, proposed to 'cure and heal' this 'decomposing city' while 'lifting its imposing geometry of metallic bridges and factories to the skies'. French intellectual Jules Régis Debray went so far as to state in a sensational pamphlet (Against Venice, 1995) that 'Venice is not a city but a representation of a city'. Therefore, one question remains: if this stereotyped image and constantly reused clichés have been stopping us from seeing the real Venice, then should we open a debate on its problems and challenges?

If the problem of rising water levels, which threaten to swallow the city, is analysed, it seems that the reality is more complex than certain newspapers would have us believe. Since 2003 the Moses project, an ambitious sea defence project involving mobile gates, has been in action at the mouth of the Lido (a twelve kilometre island). This will allow the lagoon to be isolated during high tide. The project has been given extensive press coverage and rightly so: the work was given to a pool of companies without appeals being organised and its colossal costs, estimated to come close to four billion euros, only keep growing.

The project, now several decades old, was conceived in an era when the high tides that occur frequently today were an exception. One possible consequence of this is that the isolation and transformation of the lagoon into a lake could pose huge problems in terms of managing the environmental balance of the lagoon and maritime traffic. In case the project cannot meet with success, alternative solutions could be developed in parallel. One of the biggest problems is the red tape involved and the lack of transparency from the Italian government, rather than the tragic and inescapable destiny of Venice.

As for the question of the depopulation of lagoon islands, the problem is real but it must be acknowledged that this is a common phenomenon seen in all the old Italian cities: in Florence and Rome too, people living in the old historic centres, and in particular sectors that were popular in the past, are gradually moving to outlying areas. The demographic statistics do not give a complete picture of the residential evolution and urban flux occurring. The Mestre district, once a simple back-yard located on 'terra firma', has become a satellite city where thousands of Venetians commute to work over the Liberty Bridge to the island. However, the 26, 000 European students who attend the two universities of Venice do not count as lagoon residents in official statistics.

In the last few years, Venice has truly developed its vocation as a university town and a European cultural centre. In the shadow of great events such as the 1932-era Venice film festival, part of the Venice Biennale for contemporary art, dozens of smaller projects, often managed by young cultural production companies, are now seeing the light of day. In addition to this, architectural works and first class renovations were completed in 2009, such as the famous Calatrava Bridge, now the fourth bridge to span the Grand Canal. These are only a few examples among many which show how the reality of this insular city is more complex than the image portrayed by the media would have us believe. If those who grew up in Venice in the sixties and seventies think that the evening is a synonym for boredom, today the squares and areas of Campo Santa Margherita, Fondamenta della Misericordia and Rialto are packed with bars and restaurants of all kinds. We just need to take the time to enjoy them.