Utopia remains close, but far, after the Dahrendorf Symposium

Eleven panels, roundtables and keynote speeches brought together 53 participants (though the real number is actually slightly lower, as some speakers appeared more than once on the podium) from politics, academia and civil society.

The Dahrendorf Symposium, held last week at the Berlin-Brandenburgische Akademie der Wissenschaften in Berlin, pointed high and aimed at “Changing the Debate on Europe”. 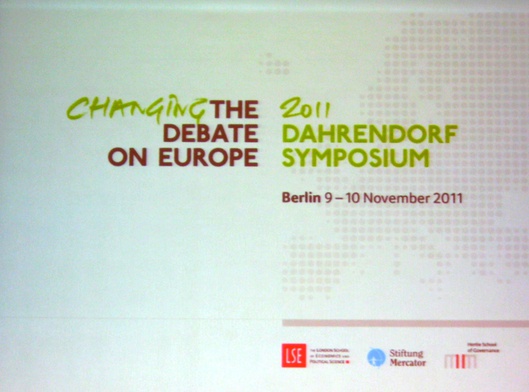 In fact, participants discussed European democracy, European social space and European foreign policy. The dominant topic, however, was the euro-crisis. As Alina Mungiu-Pippidi from Hertie School has pointed out, three alternative ways to handle the crisis became apparent. The first one she labeled “Transformative Power of Europe reloaded”. It is basically a more-of-the-same-strategy, whose proponents suggest that after the crisis, European countries, cultures and economies will re-converge towards a more united Europe. The second option, called by her “Abandon the Bridge Too Far”, presumes that not all European countries can really cope with a common currency. A break-up of the euro would be the consequence. In that case, alternatives have to be found to make possible a smooth transition and the continuing existence of a European project – though it won’t be the same as today’s project. The third way would be a further differentiation of the integration process.

None of these three options found consensus, of course. Experts and policy-makers alike are unsure how the crisis will evolve and what measures are adequate to address it. All options would have consequences for citizens, but which exactly remains somewhat obscure.

Are these options new? Did the Dahrendorf Symposium succeed in “Changing the Debate on Europe”? No. All of them were discussed in newspapers and think tanks for some time now. But the Dahrendorf Symposium was nevertheless an opportunity to meet and discuss the current crisis, as it brought together so many participants, including ministers, ex- and incoming-Prime Ministers, and Parliamentarians from different countries.

What was missing in the debate? As the euro-crisis consumes much of the time, other issues never made it on the table. Discussions of resource-consumption and environment are victims of the euro-crisis, the situation of migrants and minorities was discussed only at the margins and possible negative consequences of the currency-crisis for democracy in Europe are acknowledged while alternatives were unfortunately not suggested.

Public participation has always been a weak point in European integration. To allow for more participation would mean a real major shift in the debate on Europe. But as long as discussions about the right way forward in Europe are seen as essentially negative, as long as publics in European states don’t take notice of arguments in other countries and don’t engage in public discussions with them, as long as the media are seeing developments in Europe often enough as “foreign” news, even if these developments affect very directly welfare and well-being of the citizens, as long as the media entrench themselves behind barriers of national borderlines, such a change of debate still seems to be a kind of utopia. Many more forums, and not only, are still needed to turn this so close utopia to reality.