Who doesn’t like spaghetti? Very few people would turn down a hearty Bolognese, but how many would dare to wear a pasta strainer in public? Serge has no fears in this particular department. For him, pasta and beer are solutions to all of the world’s problems.

On the other end of the telephone is a serene, warm voice, open to discussions about religion. However, today we’re talking one religion in particular. Serge Burgman is the leader of Belgian Pastafarian Church, one of the many thousands of congregations across the planet. Speaking to him is a revelation.

"The world that we know today was not created by God, but rather the Flying Spaghetti Monster." Our conversation has just started, and it’s already very promising. According to the Bible, God took six days to create the world and rested on the seventh. Serge’s version is rather different: "the Great Monster, who had had a few too many beers, created the world in four days." Pastafarians believe that the Monster’s drunken state explains the imperfections in our world: "These things happen. It’s like when you go out for drinks and things get a bit out of hand. It happens to everyone!" This creationist theory, as strange as it may seem, is the foundation of a religion with a growing number of loyal followers around the world. Pastafarianism (the name comes from "pasta" and "Rastafarianism") has its own scriptures, customs and commandments, known as "the Eight Condiments."

It all started in the USA 11 years ago. After facing a lot of pressure from various Christian fundamentalist groups, the Board of Education in Kansas decided to pass a surprising new law: biology classes in public schools were obligated to dedicate the same amount of class time to the theory of intelligent design as to Darwinian evolution. This caused a considerable backlash. It was then that Bobby Henderson, a physicist from Oregon, intervened, and in June 2005 wrote a letter criticising the decision to bring creationism into the classroom. Henderson viewed this approach as absurd and demanded that students would also have to study his own made-up theory: that the world was not created by God but by a giant flying bowl of spaghetti and meatballs.

"Heaven is filled with beer and strippers"

Like every other self-respecting religion, Pastafarianism has its very own paradise: "Our Heaven is full of beer volcanoes and strippers. Naturally, the gender of the strippers depends on the sexual orientation of each person." But what do you have to do to be deserving of entrance to Pastafarian heaven? "In principle, everyone deserves to go to Paradise. The only problem is that if you haven’t been a good Pastafarian, your beer will be watery and your strippers will not be especially attractive. That is the worst punishment that you could impose on a bad Pastafarian."

So, is Pastafarianism a serious religion, or a parody that mocks other religions? Serge clarifies: "Officially, it’s totally serious. Unofficially, it’s a way of saying to believers that they can pray to whatever they want so long as they don’t impose those beliefs in our schools." He also highlights that Pastafarians hope that they will one day have the same rights as other religions. For this reason, in prisons there have to be Pastafarians to officiate mass for inmates who belong to the religion.

Currently, Pastafarianism has the legal status of a religion in the Netherlands, and in New Zealand the only country that officially recognises marital unions according to Pastafarian rites. In Poland, the debate over this status is still ongoing. In Belgium, however, it is still not considered an official religion. This year, Serge and his church organised a Pastafarian marriage ceremony in Uccle, a bourgeois neighbourhood in the Belgian capital. The marriage of Martine and Philippe followed Pastafarian tradition, apart from one tiny detail: at the moment of saying, "I do," both of them put a pasta strainer on their heads. Of course, the main dish could not have been anything other than a good bowl of spaghetti.

Despite wanting the public to take them seriously and to stop seeing them as a bizarre religious cult, Serge recognises that humour is key to Pastafarian principles: "humour is a means for us to expand our ideas."

Pastafarians love pirates. One of the main symbols of Pastafarianism, aside from the Flying Spaghetti Monster, is a pirate fish. Serge explains how he and the rest of the Spaghetti followers love to dress up in pirate gear because for them, pirates are sacred beings. Where does this connection between Pastafarians and the famed criminals of the high seas come from?

"According to scripture, pirates were the original Pastafarians, although we now have negative perceptions of them." He also adds that there is a link between global warming and pirates, given that they fight against natural disasters. "You know the problem with the ozone layer?" Serge asks. "We have discovered that since pirates disappeared, the hole keeps growing, so you could argue that Pastafarians and pirates have a big influence on climate change." 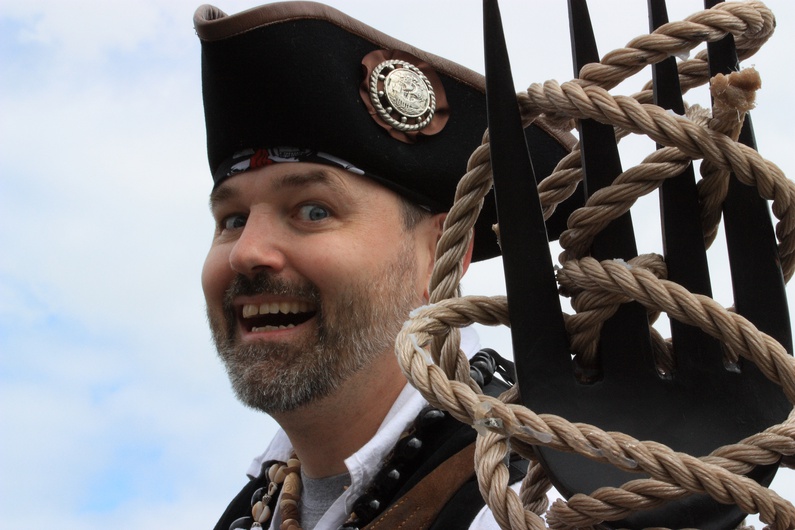 Although Pastafarianism does not impose strict rules, believers can be guided by the Eight Condiments, a list of relatively coherent (and non-theist) things "that it would be preferable not to do." The sixth particularly stands out: "It would be preferable not to build multimillionaire churches, temples, mosques or shrines in my spaghetti honour when you could invest money in putting an end to poverty, curing diseases or lowering the cost of cable TV." 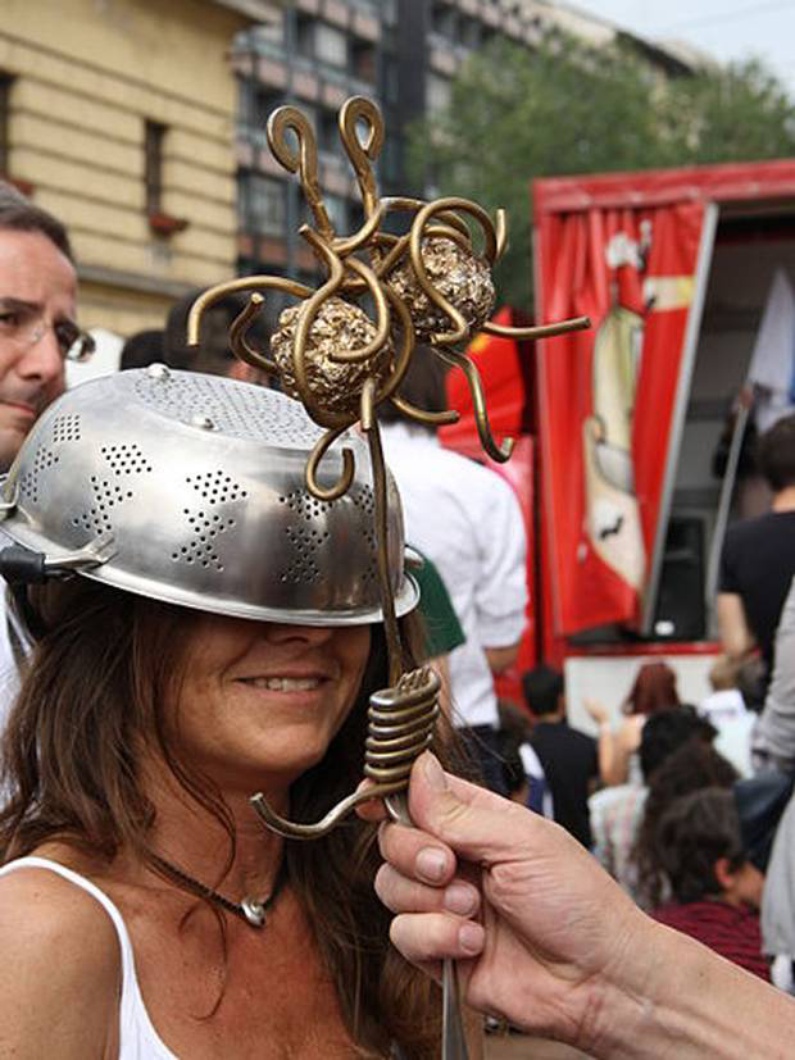 While Pastafarianism was born of a personal vendetta against religious interference in schools, it has an ever-growing base of believers; thanks, above all, to social media.

"Our religion is very current and it’s adaptable to young people. We use Facebook to share our ideas." Serge is proud of having more than 2,000 followers on his page, and it’s no wonder why. Who knows? Maybe one day, streets will be filled with people wearing pasta strainers on their heads.

Until then, may the Flying Spaghetti Monster fill our days with carbonara sauce.