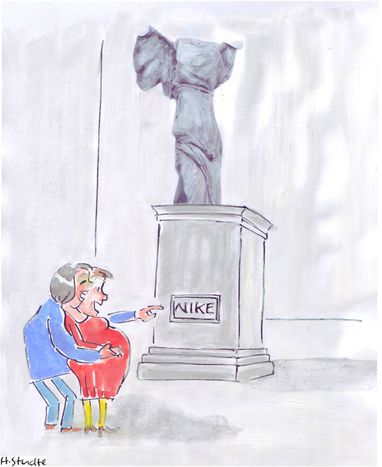 As the launch of a new online database exploring the origins of strange surnames is announced in the UK, we think of the Scarletts, Nikes and Solidarities in this EU world

Remarkable scenes are playing out in nurseries throughout Europe. Beloved (David in Hebrew), Angel (Angelina in Latin) and Wonderful (Shania in Swahili) are innocently playing in the sandpit while the Biggest (Maximilian in Latin) is building blocks. Crooked Nose (Cameron in Gaelic) grabs a child on the arm and says: Where is my toy Servant of Allah (Abdullah in Arabic). The Tailor (Andreas in Greek) goes Scarlet (Scarlett in English) with rage because of the Forest (Silvia in Latin); 'Your toy is hidden there,' says the Graceful (Hannah in Greek), honestly (Katharina in Greek).

Parents usually take the Latin phrase 'Nomen est Omen' (your name is your fate) to heart. It seems that now, instead of just naming the son after his father (as is common in Iberian society), parents are looking for more individual names with positive character traits that are more internationally pronounceable. Julia (the female version of Julian) is equally as popular in England as it is in Poland and Finland. Lukas (from the Greek Lucania) is at home not only in Norway, but also in France and Lithuania. Crafty parents know that giving their offspring a brand name will increase their chances in the job market. Luckily for German babies, they’re not allowed to be called Coca-Cola or Nutella – something that you can study on the new onomastics masters course at Leipzig university. Megane is frowned upon in France ever since Renault released the Megane model in 1995. On the other hand, Nike is a popular girl’s name in Norwegian as it comes from the ancient Greek for 'victory'.

There are also more political reasons for naming a child. For example in the eighties, a Polish family gave their son the name Solidariusz (an alleged mix of 'Dariusz' and 'solidarity') - though in Poland, constitutionally you are not free to name your child anything you want to, and you have to prove the word exists as a name. Europeans can also name their daughters after the mythological goddess Europa (Greek for wide, spacious), and a name of one of the planet Jupiter's moons. But if Europa isn’t the name for you, you can change it (easily done in most countries) or you can bring legal proceedings against it, as a 9-year-old girl from New Zealand did in July 2008. Though we don't know what name the former Talula Does the Hula From Hawaii now goes by.