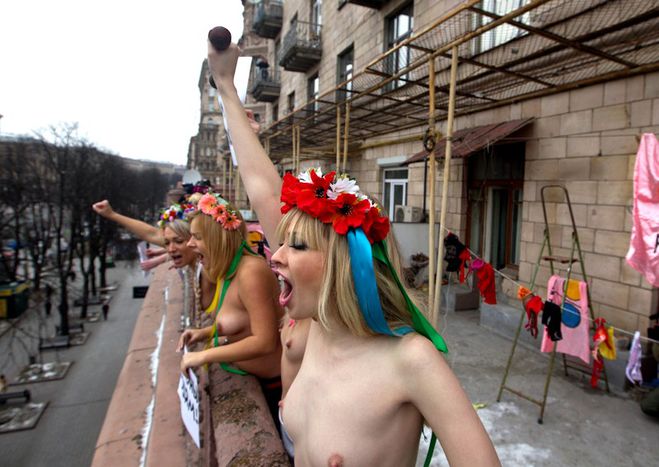 At first the 300 members of the feminist community came to the streets to protest against the expansion of sex tourism in the Ukraine. The 12, 000 active 'sex pats' are growing under the indifferent gaze of the authorities. Femen has been organising nude performances as a political weapon for three years now. After a run-in at the Italian embassy, Inna Shevechenko vents her anger

cafebabel.com: When and why was this feminist organisation born in Kiev?

Inna Shevchenko:Femen was founded three years ago. We wanted to give women the opportunity to protect themselves. In the Ukraine nobody does this, nor fights for our rights: prostitution and sex tourism are omnipresent, and there are no women in the business or political world who could be a role model (apart from perhaps the former first minister Yulia Timoschenko, of the leaders of the 2004 Orange Revolution - ed).

cafebabel.com: Is prostitution legal in the Ukraine?

Inna Schevchenko: No, it’s illegal but there are brothels everywhere, from the centre of Kiev to the more remote regions. The police don’t say a word and they do nothing to stop it, because prostitution generates an important flow of money. Many tourists come to the region to take advantage of the sex tourism. If you go down the street, you can strike up a conversation with a girl and say ‘I’m an American tourist, come with me’.

Inna Schevchenko: Sometimes. The Ukraine is a very poor country. When a man approaches us and proposes that we work in a brothel with a good salary, the majority of the women who live in the provincial cities and have nothing to live on fall into the trap, because it’s all they have left. There are no job opportunities. If I want to work in a bank, they’ll tell me I can’t, because I’m a woman and it’s a man’s world… 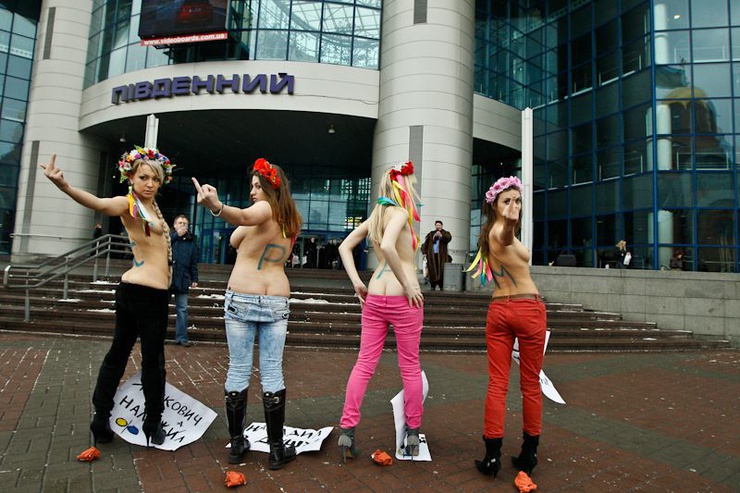 cafebabel.com: So to change things, you go topless.

Inna Schevchenko: Actually we have realised that to change things here, all we have are our bodies and our spirit. I don’t care about the government or the police. The only way to attract attention to ourselves is to shock, and flaunting ourselves is a as good a way as any to do it.

cafebabel.com: How do people react to your performances?

Inna Schevchenko: With difficulty. Even the journalists have no qualms about calling us prostitutes. People often have trouble understanding it, but, the message is coming across more and more, because they have their doubts and realise that we are talking about the real problems of our society.

cafebabel.com: Is there no tension with the authorities?

Inna Schevchenko: As soon as we do a performance, there’s loads of police to keep an eye on us. Just this morning, I was arrested during a flash mob. The most contradictory thing is that we didn’t do anything against the law! They want to us to shut up because we tell the truth, because we’re brave and strong. The police admitted that they didn’t know why I was arrested, that the order came from above…! Many politicians come to see us to try and buy Femen’s strength in which they’re interested. But if we sell ourselves, even once, the values that we defend will have been compromised. Meanwhile we try to get money however we can: selling t-shirts, posters, art and so on. But we are convinced that someone in Europe will hear us and grant us their support.

cafebabel.com: What was this morning’s demonstration for?

Inna Schevchenko: We gathered in front of the Italian embassy to tell the women of Italy that we are with them. The image conveyed by Silvio Berlusconi, of the cool womaniser who can kiss whoever he wants, represents everything that we don’t want. If he has the nerve to continue with his old tricks, we won’t hesitate in going to Italy to tell him what we think to his face...!

Images and video courtesy of ©Femen