Turkey in transition: Is gender equality a EUtopia?

In Turkey, the outright victory of the Justice and Development Party (AKP) in the General Elections still proves women's rights have been either irrelevant or detrimental so far. Rethinking the role of the EU may bring a new momentum to the left-wing opposition, to gender equality activists or simply to Erdoğan-skeptics who fear a U- turn in civil and human rights in Turkey.

Pinar Tremblay, a columnist for Al-Monitor's Turkey Pulse, wrote an article to show how women in Turkey remain under-represented in political life. Pinar shows evidence that after 85 years, Turkish law has been hopelessly unable to fight gender inequalities in the political arena. The ruling Justice and Development Party (AKP) was the only mainstream party where women seats fell sharply with only 69 candidates out of 550 on the AKP list. The message is that there is still a long road to go to deliver equality for women in Turkey.

Emine is the woman behind Recep Tayyip Erdogan, the Turkish president, the regime' strongman and now western ally helping the over 2.2 million refugees living and benefiting from temporary protection in Turkey. The First Lady is a clear symbol of Turkey's paradox: despite being vocally critical of the still limited role women play in decision-making, Emine is a prominent figure of the establishment. On the one hand, the spouse of Erdogan joined the W20 Summit (G20 for Women), endorsed campaigns to support female mayoral candidates and remained a relentless player in AKP events for women. For her supporters, she might be paving the way for a new generation of women in politics and building a new progressive-wing within the broader AKP. 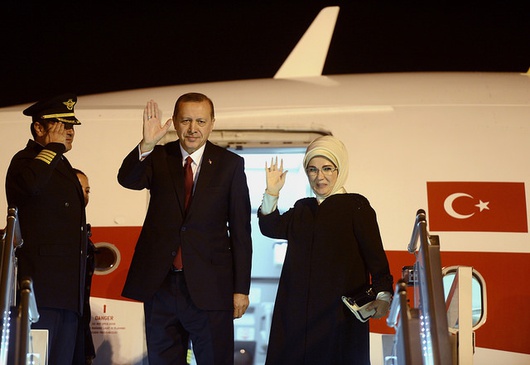 On the other side, many critics in the West, and especially women's rights activists, believe this portrayal is delusional. The party loyalty, and mostly the controversial exhibition of the headscarf in state ceremonies, make the First Lady look less modern than Michelle Obama or Angela Merkel, her Western counterparts, and less prone to a shift in the gender paradigm. The most critical observers note that Turkey's First Lady is showing the EU that Turkey is drifting towards a 'Muslim conservatism' and being lost by the West.

In spite of the 'pro-women' discourse of Emine, Turkey is lagging behind in terms of equal political and social participation. The country ranks 125 out of 140 countries on the Global Gender Gap Index 2014. The report on EU policy for gender equality released by the European Commission also reveals that only 28% of Turkish women do participate in the workforce compared to the EU's average of 63%.

Under the provocative hashtag #WeAreTurningOurBacks, thousands of women, and even men, reacted on Twitter to the harsh statements of Erdogan during a gathering of a group of women addressing the need for more deputies representing women in politics. Photos of their backs and inflamed remarks have started flooding the social network. The president described the event led by Twitter users as 'offensive and a moral insult'. 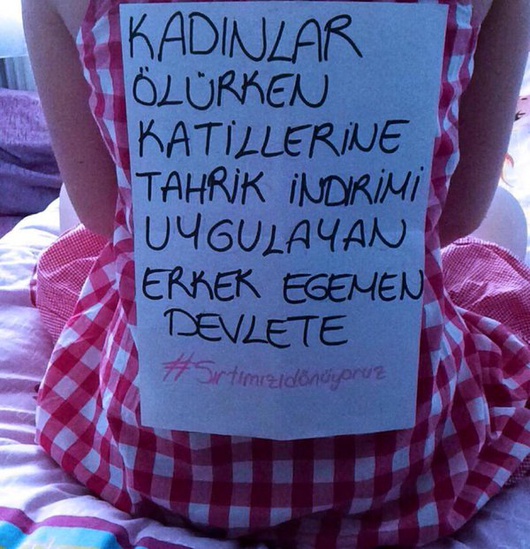 Despite several attempts to ban both Twitter and Youtube, this digital campaign illustrates best how it is possible to confront government forces with the imbalanced trend in the distribution of opportunities in the market private sector, education and elected offices. Gulsum Alan, Turkish journalist for Euronews, points out 'this campaign obviously encourages women to take the lead in politics, but is limited just to a branch of the population'.

On an unprecedented scale, new movements start arising out of social media to adamantly fight not just gender-based discrimination, but forms of violence, such as murder, pedophilia and even the most common sexual harassment. Earlier this year, a mass movement stormed in a protest against the brutal death of 20-year-old girl Ozgecan Aslan. The blatant rape and murder committed by 26-year-old man Ahmet Suphi Altındöke led to an outpouring of rage against the alarming violence rates in the country. 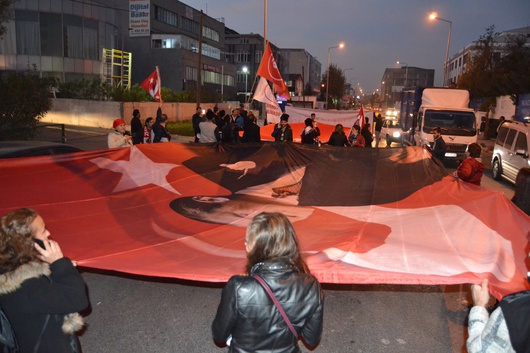 Cafe Babel spoke with Aylin, a 31-year old supporter of the 'Kara Kalpaklılar' movement which has ties to the nationalist MHP party.  This movement very much in defends the memory of ‘the father of the Turks’ Mustafa Kemal Atatürk and of what is known as ‘Turanism', a vision of unification of over 350 million Turks and Turkmen in a region ranging from the Bosporus in Syria to the borders of Uzbekistan and Kyrgistan.

The separation of state and religion is a fundamental element of the modern Turkish state that Atatürk founded in 1923. Aylin, who at a young age adopted the Christian faith despite her parents’ Islamic beliefs, has grave concerns about the current direction of President Erdogan. As a Christian and pro-European, Aylin believes 'the islamification of Turkey is restricting freedom for women'. While driving her lean red Citroen DS, the Berlin-born business woman explains it is urgent to reach 'more cooperation with Europe' to guarantee and improve the liberties of modern women in Turkey. 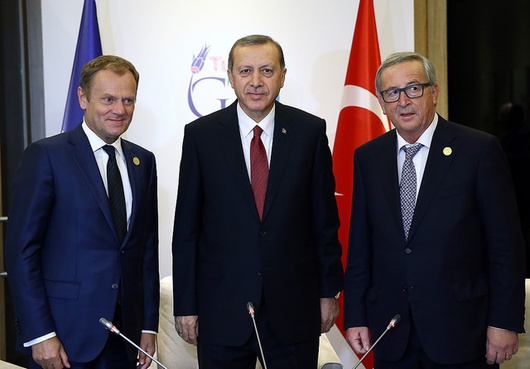 Beyond the speculation on the Turkey's EU membership, it is factual the European enlargement agenda has become a trump for women when it comes to a progress towards rule of law, democracy and fundamental rights. As long as Turkey remains a 'newcomer', supporting the accession to the European Union is the same as leveraging the EU-inspired reforms towards gender equality in civil society.

It is not a secret Turkey's Constitution guarantees the rights of women, but does not prove how it can be enforced in practice. For five decades, the European Union has forced national policy change in Turkey and pushed for gender balance with new legislation and recommendations. Likewise, the Committee on Women's Rights and Gender Equality (FEMM) in the European Parliament has been also incorporating gender into all the areas of public policy.

Most recently, the Consumers and Gender Equality Commissioner, Vĕra Jourová, in a joint statement, commented 'combating all forms of violence against women and girls is a fundamental pillar of the respect for human or fundamental rights and remains a priority for the EU, both internally and externally'.