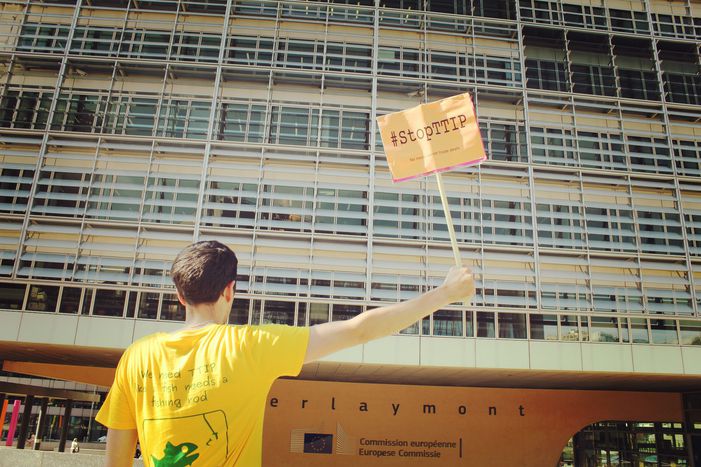 Greenpeace published confidential documents on Sunday that reveal the current state of the negotiations on the TTIP free trade pact. Commentators take different views of the coup, with some saying that the politicians must not act without consulting the people and others arguing that such transparency hurts Europe's bargaining position.

The Neue Zürcher Zeitung sees the TTIP leaks scandal as unnecessary and counterproductive: "It should be stressed that the leak documents negotiating positions and not negotiation results - the latter have always been published. The EU began publishing its positions long ago under pressure from the public. Never before have so many details about ongoing negotiations been known. Whether anyone benefits from such transparency is questionable. The public learns little that is new. And for the negotiators it becomes more difficult to act strategically or make compromises without losing face if everyone always knows the details of their positions in advance. This won't make the already tricky TTIP negotiations any easier."(03/05/2016)

Debate is too hysterical - tagesschau.de, Germany

All the fuss over the TTIP papers is unjustified, tagesschau.de observes critically: "The purpose of such documents is to list the negotiating positions. Their contents are nothing new and one can easily imagine what they say. In international negotiations the truly difficult questions are almost always dealt with at the end. ... But nothing is normal in today's hysterical debate over the TTIP. For example the German concerns about environmental or consumer standards: was it the German or even the European authorities who exposed the VW diesel scandal? Is Volkswagen now paying higher compensation to European customers? ... It's just like the European negotiators said from the start: only at the end will we be able to tell how good or bad the TTIP is. Until then the Americans and hopefully also the Europeans will doggedly continue the negotiations." (03/05/2016)

It is secrecy that is feeding all the suspicions regarding the TTIP, columnist Bert Wagendorp complains in De Volkskrant: "The human mind works in a simple way. If it doesn't have enough facts it starts making things up. That's how we ended up with religions, and that's perhaps why we're turning the TTIP into something it isn't. But perhaps our distrust is justified and it's all far worse than we could ever imagine. … I don't find the fact that Angela Merkel, Mark Rutte and Obama are suddenly in such a hurry to conclude the negotiations particularly reassuring either. It's all just a feeling, but it's as if they want to make us swallow something before we realise just how unappetising it is. Now if in reaction to TTIP leaks the politicians in Washington and Brussels start telling us what they're doing so that we can talk about it, that would be real progress. Long live the leaks!" (03/05/2016)

Now it's really crystal clear that the free trade agreement won't serve the interests of the Europeans but those of the international companies, the left-wing daily Duma rails: "EU Commissioner for Trade Cecilia Malmström is insisting now that she is acting in the Europeans' interests in the negotiations with the US. But who buys that, Ms Malmström? The less forgetful among us remember well how you said that you weren't directly elected by the European people and therefore weren't answerable to them either. They also remember how, in the vote on the TTIP last summer, the MEPs tried to fool the Europeans into believing that their interests were being protected. Unfortunately the legislators prefer to side with capital rather than with the working people." (03/05/2016)