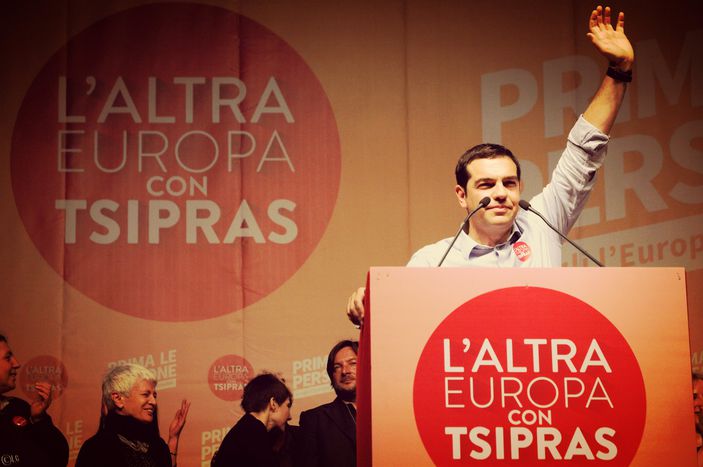 Alexis Tsipras's left-wing Syriza party scored a surprising victory in the Greek elections on Sunday, receiving 35.5 percent of the vote. While some commentators hope the government will now give itself much needed elbow room vis-à-vis the country's creditors, others worry that the Greeks are increasingly disenchanted with politics.

Syriza must not bow down to creditors -Le Courrier, Switzerland

Syriza must now give itself some elbow room vis-à-vis its creditors, the Christian-social daily Le Courrier advises: "The irony of history is that the leader of the 'radical left' Alexis Tsipras will be in charge of implementing the ultra-liberal programme imposed by the creditors. … What can Syriza make of this victory? We hope that the left's remaining in power will at least guarantee the implementation of the few progressive clauses written into the memorandum (the fight against corruption and tax evasion). Above all, Alexis Tsipras and his comrades have every interest in securing themselves some room to manoeuvre vis-à-vis the creditors' demands. After all, that was the basis of their campaign. If they don't, the leader of Greece's 'radical left' will be remembered as the manager of one of the worst austerity and privatisation plans in history."  (21/09/2015)

Alexis Tsipras must now show his sense of economic realism, the centre-left daily Delo demands: "With the right coalition partner Alexis Tsipras will continue his metamorphosis from extreme left to centre-left politician. ... It's a historic fact that the left in Europe - and the entire world - successfully introduced its idea of a progressive society into the public discourse in the last century, and that this idea has even been adopted by many conservatives. But it is also a fact that the political left often fails as a result of economic developments, which don't work according to a formula. Numerous European leftist governments have already been able to give their citizens a better life. Now the new Greek government must also demonstrate realism in economic policy." (21/09/2015)

The last round in Athens - Naftemporiki, Greece

What is needed after the elections in Greece is a will for consensus and cooperation, the conservative daily Naftemporiki urges: "The elections are over and everyone should now face up to the hard reality. Greece must now be ruled by people who have recognised that everything hangs in the balance over the next three years. Either we're successful or none of us will be rescued. To avoid the latter scenario, our politicians must put their party interests aside and do their utmost to enable all of us to overcome our difficulties together. ... Today the last round in Greece's fight for survival begins. The number of victims has already been high in the last few years. And because of the mistakes of recent months the number of future victims will also be high."  (21/09/2015)

Greeks turning their back on the state - El Periódico de Catalunya, Spain

As well as the strong performance of the far-right Golden Dawn party the low voter turnout worries the centre-left daily El Periódico de Catalunya: "The other piece of bad news is the low turnout, which however isn't surprising. This is the third time that the Greeks have gone to the ballot so far this year, and yesterday's elections were the fifth in six years. Their weariness and disillusion at realising that no matter how they vote, they never had a real alternative is understandable. This will be another major challenge for the new government: not allowing the rift between such an important part of the population and the state deepen."  (21/09/2015)