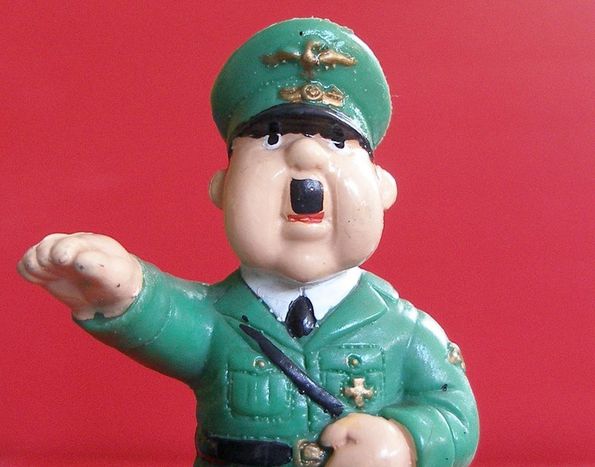 Trade of Nazi propaganda is booming in Poland

Punishable in Germany, legal in Poland: SS badges, swastikas, t-shirts illustrated with extreme-right symbolism and far-right music are sold in border markets on the Oder and Neisse. Poland is the biggest producer of nazi propaganda in Europe. Although the marketing of political goals is forbidden, trade with Nazi devotees is not

In the obscure stands of a market in Küstrin on the Oder, t-shirts are emblazoned with the words Deutsche Wut (German fury). Pictures of soldiers in the armed forces are placed beside the text. Next to the heads of decapitated SS members, other tricots are adorned with messages from the extreme-right music group Landser. They cost five euro. 'These are clothes for teenagers,' Marian Kalicki, the stand’s owner, casually interjects. He says that he had no idea that Landser are the first band in Germany to be labelled a 'criminal association' by the federal court of justice. Or that the band leader was jailed for three years for sedition. 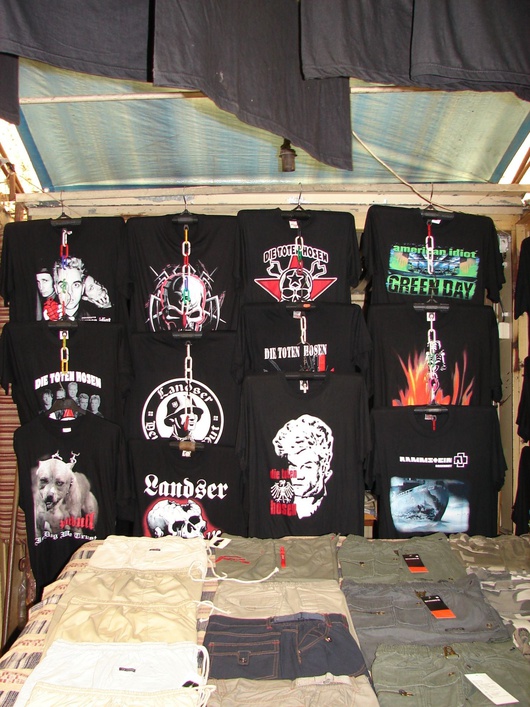 A man in the neighbouring stand sells counterfeit Thor Steinar clothing. In Germany, the brand is a symbol of the extreme-right movement. In April 2008, civic protests in Frankfurt on the Oder led to the close of a branch in Frankfurter Bahnhofsplatz. The proprietors will hear nothing of it, and look forward to having new customers from the other side of the Oder. The same goes for the owners of a neighbouring kiosk, who sell music and DVDs: the Landser albums Rock against the System and The Empire will Return are displayed unabashedly at the front of the display table, next to traditional saxon melodies.

Both covers are illustrated with soldiers of the armed forces in the midst of battle. One CD costs twelve euro. 'Illegal products are expensive,' explains the stall owner, who plays Landser on his CD player without a moment’s hesitation. Provocative texts wave from these stands all the way up to the shops in Boguslaw. He has been selling SS-symbols, swastikas and busts of Hitler for six years. Poland is the biggest European producer of historical and imitation objects from the Nazi period.

In west Poland alone, there are two stitching rooms dedicated to the production of Nazi uniforms

symbols which are forbidden in Germany. The Polish press reports on production halls in Breslau, where thousands of commemorative Nazi replicas are produced. In west Poland alone, there are two stitching rooms dedicated to the production of Nazi uniforms. In July 2008, Brandenburg’s home secretary Jörg Schönbohm (CDU) asked the Polish government to halt the production and trade of Nazi memorabilia.

But not much has happened in the mean time. 'The Police have begun surveillance, but no investigations have been carried out by the Department of Public Prosecution,' says Artur Chorazy, spokesman for the police in Gorzów. He refers to Polish law, where only the circulation of Nazi propaganda for political goals is forbidden, but not its trade. Lawyers talk about a loophole in the Polish legal system.

'It’s not the laws that are to blame, but the mute complacency of wider society,' explains Marcin Kornak

of the anti-fascist group Nigdy Więcej (never again), based in Warsaw. Politicians, citizens and policedon’t want to hear about the problem, he says. 'Our country is the logistical and ideological centre for the neo-Nazi movement in Europe. The production centre of the terrorist organisation Combat 18 is based here.' The extreme-right distribute the Nazi newspaper Stormer on the Weichsel, set up concerts and meetings, and work in their recording studios. They build explosive devices like those prepared for the planned attack on the Jewish centre in Munich in 2003, which the police were able to foil.

Prof. Krzsztof Podemski, a sociologist in the University of Posen, confirms the lack of widespread awareness of the growth of right-wing extremism in Poland. 'Often one assumes that the extreme-right movement is not worth investigation or analysis,' he admits. It is because of this that the exact number of extreme-right attacks is often uncertain. Since 1987, Marcin Kornak has registered 2500 incidents, including 50 murders. These statistics cannot be confirmed by Polish researchers.

The local public authorities claim ignorance of what is sold in the markets. 'I’m not familiar with this music scene at all,' says Bartlomiej Bartczak, mayor of Gubin in the Polish Niederlausitz. 'If the traders of this material are aware that their products contain Nazi content, their actions are to be judged morally. That is a task for our law makers.'