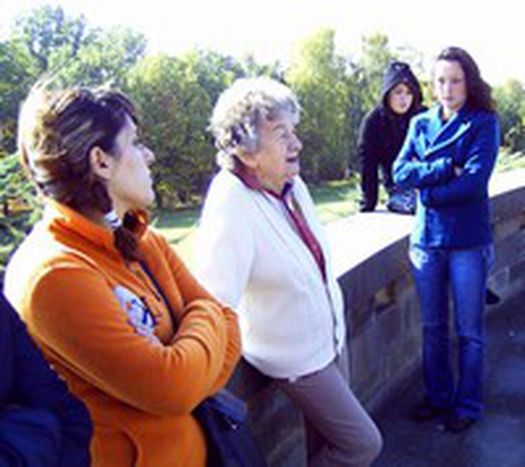 A group of young Poles, Ukrainians, Germans, Turks and Kurds joined together to travel to the Czech Republic to learn about Nazi atrocities committed there. And about their common responsibility for the future.

“For me it is important to exchange different traditions, experiences and ways of coping with the National Socialist tyranny,” explains Marcus Heer, organiser of the multicultural visit of memorials in the Czech Republic. Sixty years after the fall of the Third Reich, the crimes of the Nazis appear as if from another age. However, the young participants of a study trip organised by the Lünen Multicultural Forum (MkF) experienced close-up how those events have shaped Europe. The group, with participants of Polish, Ukrainian, German, Turkish and Kurdish origin, followed a trail of evidence in Terezin, Lidice and Prague.

“Our daily life was marked by hunger, cold, illnesses and hate-filled humiliation by the Nazis. Life in the concentration camps was inhumane,” explains the survivor Lisa Mikova. The 84-year-old can conjure up a smile despite these experiences, making her all the more likeable. Born in Prague, where she is now fielding questions from the young visitors, she lived through years of torturous degradation in concentration camps, from Terezin via Auschwitz to Mauthausen. She has only spoken about this despicable time for a few years. Some of the Lünen group members could not hold back their tears; others silently contemplated. Later they discuss how they might have dealt with the situation. The Kurdish and Turkish youths cannot avoid discussing Turkish history, from the role of religion to the Armenian genocide and the Kurdish conflict. Globalisation is also a source of controversy. Should Europe not take on more responsibility for poorer countries? Everybody is agreed on one thing - injustice has many facets.

From Prague to Terezin and Lidice. Sunshine and a charming landscape make these places that were once ravaged by National Socialist barbarism look deceptively idyllic. “It is as if the innocence of these places should once again be recognised,” ponders 22-year-old Sezer Icli. After sixty years, this trip is one of the last opportunities that the young visitors have to hear about the gruesome events directly from its survivors. “After us, nobody else will be here to answer your questions. Then there will only be books and videos,” Lisa Mikova accounts for her difficult involvement as an eyewitness of the period.

The Theresienstadt Concentration Camp in Terezin was part of the Nazi system of destruction. It earned dubious notoriety as a “model Jewish ghetto”, which was once presented to the International Red Cross to refute reports of atrocities in the concentration camps. For most of those interned, the ghetto in the former garrison town was actually a transit station for the extermination camps in Poland. Up to 60,000 Jews lost their lives on the grounds formerly occupied by 7,000 Czech inhabitants. Food was scarce and over 32,000 people starved to death. The young participants shook their heads in disbelief upon hearing that the prisoners were regularly cooped up in tiny cells. The cynical slogan Arbeit macht frei (work liberates) is flaunted, as in Auschwitz, above the camp’s gates.

On the return to Prague, the group visited a small place called Lidice, or rather what still remains of it. Maria Kalibová, who at eighty-two is one of the few remaining survivors, leads the visitors across the vast terrain and describes the events of June 1942. The village was razed as retribution for the attack on the Nazi functionary Reinhard Heydrich, who had overseen the establishment of the camp at Terezin a year previously. Almost all of its 503 inhabitants were murdered or deported.

“The history of National Socialism does not only concern Germans,” says Marcus Heer, “for young people, whether of Turkish, Kurdish, Ukrainian or Russian origin, confrontation with the past is equally significant.” Participant Selda Ilter experiences the trip as a journey into understanding the European identity: “The systematically implemented murder of Jews, the Roma people and other prisoners of war is a part of German as well as European cultural memory. For this reason we wanted to confront ourselves with it.”

For Alexej Ryshkin, a participant with Ukrainian roots, the varied perspectives of history enable a common learning process: “Despite our different backgrounds we have one thing in common – a responsibility for democracy and for human values.”