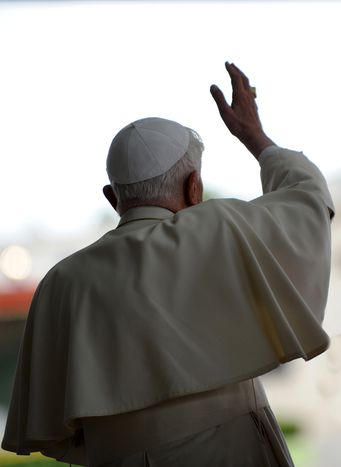 Tips: What’s next for the Artist Formerly Known as Pope Benedict?

The news spread like wildfire on 11 February: the former cardinal Joseph Ratzinger will officially resign after less than eight years in office on 28 February. It’s the first time such an event has happened in SIX centuries! Our European editors have some tips for the 85-year-old

'The people are perplexed: do they have to envy someone who can afford to say no to a job in Italy? We might as well send off cover letters and CVs to the Vatican. What with elections in two weeks and a possible return of Silvio Berlusconi, nobody will care about this news. The pope will become anesodato, the word of 2012 in Italy, or the ones who naively believe in national providence (aka INPS, the Italian pensions institute). Whether his new friends who are protesting against Fornero will accept him is another story'

'The pope is retiring because of ill health: why not move to the UK where he can practise climbing in the Peak District, or the good old British surf down in Cornwall. We can go for a hike in Loch Ness and do drive-bys in Wales. In between our atheist buses and upcoming royal baby and third heir-to-the-throne Anglican religious fever to come this summer, his sporty presence in a tracksuit in our brisk fresh eurosceptic air would set a fine balance'

'I invite the pope to manage the new trendy-Frenchie band of the moment, The Popopopops. They predicted his resignation in their debut album Swell. The pope’s got a month before its release in March to take charge: we’re happy if he goes on with his twitter account, we swear, so help us god'

'The cuddlesome teddy bears of the strictly limited 'Holy Father Pope Bear' edition by Germany’s traditional stuffed toy factory Steiff sold like hot cakes. Benedict always had a knack for spreading a kind religious glamour on articles of daily use; what about becomig head of a crisis-ridden company? After 'pope bear' or 'pope bread', we’re still waiting for a divine toothbrush after a mouthful of real christian chocolate'

'The pope should wear an exclamation mark on his figure from now on. He lacked courage in making radical changes in the roman catholic church, and was defensive instead of providing concrete solutions to a rise in secularity: no to homosexual unions or the liberalisation of abortion. He who was not revolutionary prematurely ends his mandate in a revolutionary manner, by abdication. Let him eat a piece of Polish papal cream cake - his predecessor, John Paul II, was a fan of Kremowka Papieska'

'Benedict XVI was a more open-minded pope but his attacks on social breakthroughs like same-sex marriage back up the idea of a catholic church which is still behind the times. I hope he'll find the time to read cafebabel.com and find out through our series of LGBT portraits that let people choose who they want to marry to not only embrace humanity, but increases human dignity too'

'Benedict XVI was branded the green pope, so when retirement day comes he could prove his eco-sensitivity by becoming the green patron of all European companies: we’re thinking big, from fair trade condoms (he relaxed his stance on condoms, saying they might be useful in ‘rare cases’), to promotional tours with his electric papa mobile'

Image: main, 'Pope Benedict XVI leads the recitation of the Holy Rosary during a candlelight vigil at the Catholic shrine of Fatima in central Portugal, May 12, 2010' (cc) Catholic Church (England and Wales)/ flickr courtesy of M.Mazur/ thepapalvis.com