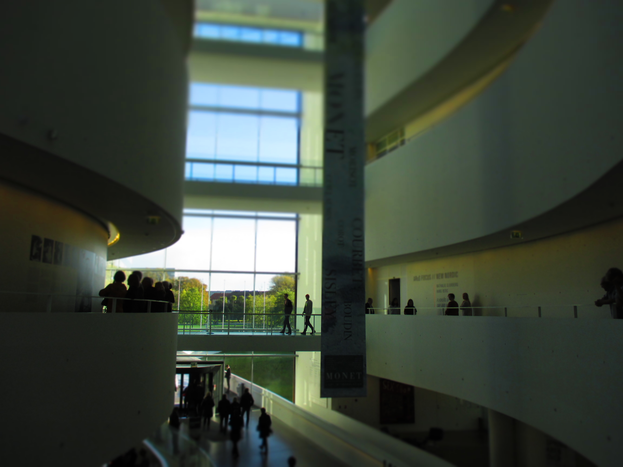 The exhibition “Monet: Lost in Translation” turns back the clock for its visitors and provides a unique glimpse into 19th century France.

“From scandalous to world art!” is the headline of the copy of the Paris Journal handed to you when entering the exhibition. The vintage newspaper is filled with pictures, stories and even advertisements from over a hundred years ago. You stand next to an old advertisement pillar while reading about the construction of railways, the Franco-Prussian war, the Eiffel tower and – ugh – “Émile Zola sentenced to prison” in the journal.

In the second room, a looping video of a train station is projected on a wall. We are on a platform now, watching people getting out of the train. It is this train, the new railway, that will bring us out of Paris, on a tour to Le Havre. We enjoy the (painted) sweeping landscape from our wagon during the ride in room 3.

Le Havre is the town where Claude Monet entered the secondary school of arts in 1851. It is here where his teacher, the French landscape painter Eugène Boudin, would tell him about the new “en plain air” technique. From this moment on, Monet would spend his lifetime painting outside, trying to depict nature as he saw it through his own eyes:

“For me, a landscape does not exist in its own right, since its appearance changes at every moment; but its surroundings? bring it to life – the air and the light, which vary continually...”

From Le Havre we follow Monet’s steps to Vétheuil, London and Giverny, the French cities where he lived and which are depicted in his paintings as a testimony of his life and work.

Monet was not alone with his perception that a precise and exact reproduction of a landscape on canvas was outdated. Together with his friends, teachers and colleagues he would establish “La société anonyme d’Artistes Indépendants” (Cooperative and Anonymous Association of Painters, Sculptors and Engravers) which challenged this established academic tradition of accurate painting.

Considered a scandal among the academic elite, the work of Impressionist painters actually saved the art of painting: With the invention of photography, exact visual depiction by painters was no longer required. Indeed, there was a need of a renaissance in order to survive.

It must have felt like a dream: the different shades of sunlight in all these different places for the very first time. This is how we get to see the world while walking through the ARoS exhibition: the streets, beaches, parties, offices, rivers, fields, small towns, big towns – and above everything water lilies – all seen for the very first time. Each painting catches the impression of a specific moment through one pair of eyes. It is somehow the most personal way to discover the past: the paintings all speak for themselves and the personality of the painter.

As you near the last room at the end of the exhibit, it is time to wake up. It is a dentist office, reminding of what role Monet’s art plays in modern times: it is displayed in a convenient calendar on the wall of the waiting room – a part of mainstream culture. Because the work of impressionist artists can be found worldwide in national galleries within larger exhibitions and in different contexts, their actual meaning is somehow lost in translation.

Thereby, the foundation of impressionism is deeply connected to the first age of industrialization and technological innovation. It is this point that the exhibition “Monet: Lost in Translation” drives home: In the 1870s, Impressionism was a revolution and it should be encountered this way.

Find this article also on jutlandstation.dk.