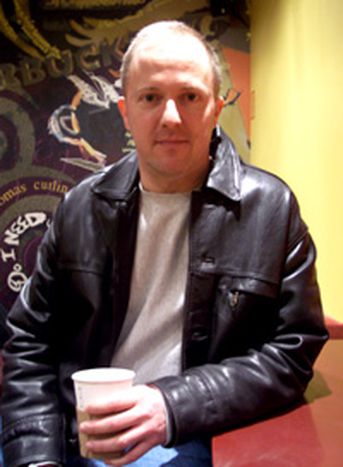 The British are known for their eurosceptism and general ignorance towards anything beyond the English Channel. Tim Luscombe is an exception. He speaks to cafebabel.com about his play, ‘The Schuman Plan’, Eurovision and ‘little islanders’.

“I am ashamed of being British,” is almost the first sentence Tim says. Just a normal Tuesday afternoon in London and we are sitting in a corner café near London Bridge. Tim, 45, one of the most promising playwrights on the London scene, is wearing a casual leather jacket- a perfect Brit, with his short hair and grammar-book English. He was trained at the Bristol Old Vic Thatre School and was Artistic Director of the London Gay Theatre Company which he founded in 1991 with Adam Magnani. His second work ‘The One You Love’ found a producer with the Deutsches Theater in Berlin, while his most recent play 'The Schuman Plan' will be published by Nick Hern Books. Three of Tim’s plays have been nominated for the Lawrence Olivier Awards (previously known as The Society of West End Theatre Awards).

In ‘The Schuman Plan’, Tim portrays the development of the European Union by telling the story of Bill, a visionary civil servant who transforms into a disillusioned Eurocrat. “In a way the play works as an explanation as to why the British are the way they are”. The audience receives a light-hearted insight into the British points of view on the European Union. “I hope the play will also be accepted in other European countries", Tim tells me, sipping on his hot chocolate. “I find there is great confusion in Europe about the British. They often ask: ‘Why are you the way you are, you little island people?’” With this play, we may be closer to finding the answer.

A European link from young

“One of my earliest memories is feeling ashamed of being British. I was on holidays in the south of Portugal with my family. One day we walked from our hotel to the beach, and there were people begging on the street. One woman was holding her hand out, begging for money. My mother thought she was greeting her, so she politely said ‘Good morning’. I could not believe it!”

And then, the Eurovision song contest. Tim tells me about the times when his parents went out dancing in the 60s, while he would watch the song contest with his grandmother. “British television in the 60s was very domestic, very local. Suddenly there was this whole glamorous thing that somehow resonated with me. I guess it was something where I recognised myself. I always found it fascinating and that got me hooked on Europe.”

Since then Tim has lived in several European countries and learned how not to be too British. “I felt embarrassed about being ‘little Englander’, relying on everyone to speak English. So wherever I went, I made the effort to learn the language.” Tim has experienced the Scandinavian way of living in Stockholm, fallen in love in Amsterdam and enjoyed the culinary specialities of Italy. When living in Sweden and the Netherlands, Tim was working in the arts industry, while his year in Rome was time out from his directing and writing career. “I had got to a point in my career where I just wanted a year away to recharge my batteries. I’d always wanted to live in Italy. I imagined it to be a place of perfection where I would not have any problems. It certainly had a lot to do with the weather, the food and gorgeous Italian men!” he says with a big smile.

But finally, something drew him back to London, in the land of Europhobia. “To be honest, I missed the grey, drizzly days when I was in Rome in the scorching August heat. But most of all, I missed the fluent conversations and being able to converse with wit and humour. This wasn’t possible for me in Italian, Dutch or Swedish, but that is completely my failing!”

Tim blames history for British ignorance towards Europe. As an ‘island race’, the Brits never thought they would have to worry about Europe. “We have not been invaded for a good long time, and I am sure that we see Europe in a very different way from how, for example, Belgium or Latvia see it, because they have been overrun by neighbours in the very recent past. I am sure the nature of our empire and our relationship to it sadly still holds us back. Also, because of our strategic position in the North Atlantic, we have allied ourselves with the USA, which has often precluded taking Europe seriously - on a political level at least.”

Tim is quite a rare breed in Britain. Many ‘islanders’ do not even acknowledge their ignorance because nobody talks about it. Tim tells me about a conference on EU funding which he attended in April 2004, a few weeks before the enlargement. “They did a little quiz in the beginning just to show us the extent of our ignorance. One of the questions was: ‘How many countries will join the EU in a couple of weeks’ time?’ There were about 70 high ranking arts professionals in the room and nobody knew that 10 countries were about to receive European membership!”

In the light of this frustrating discussion, I ask Tim the ultimate question: Do you think the UK should withdraw from the EU? Tim takes a deep breath. “I don’t. I don’t think that talks about withdrawing have ever been useful. We should now focus on what have we got and how we work best with it. We also have to spend time asking what the EU is at present. It began as a means to achieve peace in Europe, but that is now almost taken for granted. We also need to decide whether we want to celebrate Europe as a melting pot of differences in which everything becomes homogenous, or whether we want to celebrate Europe because of its diversity? Which way do we want to go?”

Tim’s play does not provide the answers, but it certainly does stir up the questions. It was a brave initiative to stage a play on Europe; the subject that every Brit likes to ignore.