Things you thought you knew about Christmas!

Well, everybody celebrates Christmas at the 25th of December. But how correct is that? Was Jesus born on December the 25th? Most of the Gospels inform us for the event but of course there is no date provided. However, according to the New Testament both Jesus and his disciples did not celebrate birthdays. He explicitly asked his followers to keep the memory of his death.

This may also be a result of the Jewish tradition, since it is clear that the Jews of that time rejected the celebration of birthdays, which were connected to the pagan traditions of Rome. The development of the celebration of Christmas, took place only after the end of the persecution, and mainly during the 3rd century. The Early Christians, used to celebrate Christmas together with the Baptism of Jesus on the 6th of January, the so called ''Epiphany''.

Thus, the determination of December 25 as the date of celebration of the Nativity, was made because on that day there was the great national holiday of "invicible" Sun (Dies Invictis Solis) and the celebration of the birthday of Mithras, two widespread festivites throughout the Roman Empire . Also, the Saturnalia and Broumalia In this way, Christians have confirmed the prevalence of their faith against the pagan gods, with a completely new Christian content on these holidays: the Sun of Righteousness was Jesus Christ Old Testament, the "light of the world "(John 8:12) and not the sun god of the Romans!

How many where the Magi?

Despite the fact that we know that the 3 Magi gave their gifts to Jesus, this is actually not correct. The Gospels do not speak of the exact number of Magi but instead they focus on the number of the gifts! The names of Baltasar, Melchior and Caspar are coming from the apocryphal Gospels. As apocryphal we mean those Gospels that were not included in the canon of the four ''official'', those of Luke, Mark, Matthew and John. According to the tradition the Magi were Persians, as Persia was the only kingdom next to the Roman Empire, where the Magi were regarded as important scientists.

What do the gifts resemble?

According to the tradition, gold, frankincense and myrrh where given to the newborn Jesus from the Wise Men (Magi). Gold, was an offer given to Kings, and resembles the divine kingdom. Frankincense, was used for religious ceremonies. This reflects Jesus as a priest. Myrrh was used in making perfume and incense, and resembles the immortality of Jesus.

However, the most important thing is that all of the three, never lose their characteristics despite the ages, so they are eternal just as the characteristics they have come to symbolize! 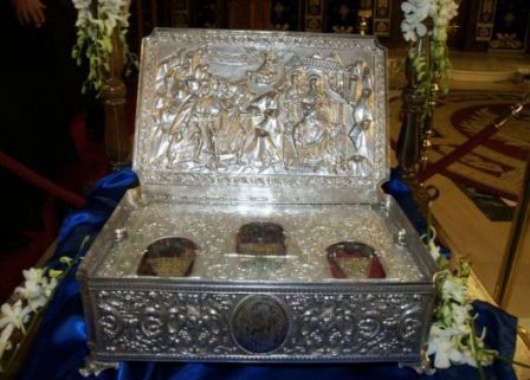 Did you know that the gifts of the Magi are in..Greece?

No joke. According to the tradition, Virgin Mary gave the gifts to the Church of Jerusalem and were kept there until 400 AD. Then the Eastern Roman Emperor Arcadius, transferred them to Constantinople. When the city has fallen to the Crusaders, in 1204, the Gifts were moved to Nikomedia (Iznik) and after the city was captured again by the Byzantines they returned as well. In 1453, when Constantinople fell to the Ottoman Turks, the stepmother of Sultan Mehmet II, who was a Christian, took the Gifts to Mt. Athos (Agion Oros) in Greece.

When she went to Mt. Athos, she miraculously met Virgin Mary, who told her to stop in order not to violate the ''Avaton'' (this is the prohibition of women to go to Mt.Athos and is still in use by the Monastic communities of Mt.Athos - and accepted by the EU).

Today, the Gifts are being kept in St. Paul's Monastery in Mt. Athos, Greece. The gifts, are 28 small golden pieces and 60 balls of incerne and myrrh.

Picture 1 shows the Saturnalia, while Picture 2 shows the Gifts of the Magi, as they are today in Mt. Athos, Greece.