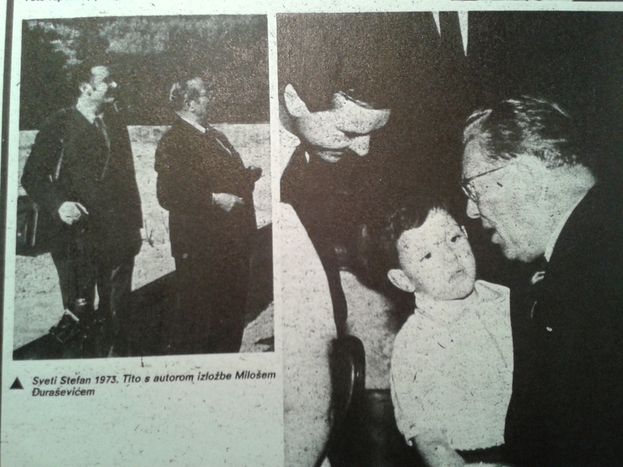 While I studied in Bosnia, at my third year I had a chance to meet a professor who would come only if the parliament's session was canceled. He'd always schedule his class, or even an exam, at the same time, so we wouldn't have so much chance to listen to him. In one of the books which was obligatory literature for this course, it was written that fascism and communism are the biggest evils in the world at all times. Before I had a chance to read this cite, I also had a chance to listen to many negative stories about communism in general. Usually, if I'd publish one of my leftist articles, Serb nationalists would call me balija (bad word for a Bosnian Muslim), while Bosniak nationalists would call me pro - Serb. Anyway, I wasn't good to any of them because I was out of the nationalist box, and mostly all of them would abusively call me a communist.

After my bachelor, I came to The Netherlands to continue my studies and attend a master in political communication. I was told that this is the country of tolerance and the country of freedom. Naturally, when I came to free Amsterdam, I automatically embraced these ideas of a free city and country, as I could see all people freely smoking weed and enjoying other Amsterdam activities. I even remember a dervish performance in one of the churches, or sharing the same room for the purposes of a church and a mosque, which in my country would never be possible. But after a bit, I realized that it's not really like that. Freedom and tolerance work until you don't violate the rules of liberalism and its living concept, even in free Amsterdam, where the neoliberal's capitalism is more alive than ever. Liberal capitalism is also very present in the entire EU, where these days we can witness a new debate in the European Parliament. As I read in the rightist Croatian paper Večernji list, one working group is temporary discussing the ban of magnification of any communist ideology. The cite from Večernji list, which is focused on this law proposal, states that it's very needed to undertake concrete measures against racism, ethnic discrimination, religious intolerance, totalitarian ideologies, xenophobia, anti-Semitism, anti-feminism and homophobia. For clear magnification of, specifically, anti-Semitism, xenophobia and magnification of totalitarian ideologies, the working group proposes fines. And these are, of course, cash fines, which are the favorite types of fines in the neoliberal Europe. It would be allowed to debate about all of these ideologies, but for their magnification citizens would pay a fine, which means that the debate would just become a monologue, as nobody could oppose anything, otherwise your money would end up in the European Commission budget. Or the budget of your own country, doesn't matter.

If you, moreover, mention that Yugoslav Communist Party is one of the most creditable why Hitler's project didn't succeed, you can really reach the dead end, because then there is an opportunity that someone blames you for the comparison of communism and some of the Jewish movements. When I, two years ago, tried to publish an article about Palestine on my blog, I was almost banned from the blogging competition, because the comic that was my illustration was judged as anti-Semitic. And really, according to the EU definition that was offered by one of the competitors, comparison of Nazi policy with temporary Israeli policy is anti-Semitism. I still don't realize why.

It's not, therefore, a problem if communism would win in Europe again. If it happens in the future, no bans can hamper it. After Europe inflicted the last shot to the communism with the fall of Berlin Wall and separation of Yugoslav republics, the problem nowadays is how to put an end to souls that are left over and who still use their brains; those who don't support banks in their hunt to debtors; those who strive for everyone's right for house and food; those who don't play like Obama and Merkel say. Nowadays there are very few of these people, but still enough to spread the voice. In Poland and Lithuania communist symbols are already banned, probably, for them justified reasons, but there is still room to make the same ban in the rest of Europe. The working group which discusses this law proposal called it, read carefully now, European national statutes draft for promotion of tolerance.

One of the members of this working group is Milan Kučan, former Slovenian president, who, what an irony, came to that position mostly thanks to the Yugoslav Communist Party. His presidential career lasted until 2002, but analogically, he would never even become a European Parliament member without the great support of Yugoslav Communists in the early 80s, when they launched him directly to the stars. The Communist Party made him a politician, they educated him and they ensured he became Slovenian president as well. But in spite of that fact, Kučan is today opposing to the Yugoslav communist darkness; the same darkness which won against fascism during World War II, but unfortunately, only for a short period. Fascism came back to The Balkans from everywhere; from the diaspora; from the inside and from the tolerant West, which shaped their players as democracy rebels and freedom fighters, and then pushed us to debt slavery. Those who don't obey to the political order like that, will finish as one of the Greek prime ministers, who was posed and then deposed in the record time. Other possibility is that independent constitutional court just bans all the government decisions which are against the banks, like it happened in Spain, where the government wanted to stop the banks to take the debtors' houses and flats. Our human right for a housing, or for a happy-go-lucky childhood of our kids only works if we don't run afoul of the banks. If we don't have money, for any reason, these human rights are not guaranteed anymore.

It's the same story with the privacy rights. I'll go back to the beginning of this article and free Netherlands, where I came to full of enthusiasm. Although I am not a wrong doer, the fact that I cannot use public transport anonymously shouldn't annoy me; the fact that I can't pay anonymously in a lot of stores, even cafes, shouldn't annoy me; also, there is no anonymous traveling, no anonymous Internet (mobile, home or school Internet, everything is on my name), etc. All my accounts are connected to my bank account, so if I ever do something wrong, they will easily find me and take my money for a possible fine. In some parts of the country, it's not even possible to throw the garbage away without a name card. After the bin recognizes you, then the lid is being opened, and it can check if you divide your garbage as plastic, glass, cardboard and organic, or if you throw away everything together. I wouldn't be surprised if there is a camera which records all your garbage activities, because there are already thousands of them all over the country; on the highways, in front of the buildings, on the working place, etc. The owner of the pub where I often go out also bought 20 cameras and placed all of them in the working area; for their security, that's what he says. Security is usually a reason for all of these government activities, but one can also feel like a character from Orwell's 1984, where the Big Brother is literally always watching you. If I put my legs on the opposite seat in the train, I feel that some voice will just appear, as from the telecran, and tell me something like this: "Comrade Softić, please, put your legs down, because this is not allowed in the train, otherwise you will pay a fine". Or they will just take money from my bank account, without any warnings. All of the things that liberals blamed communists for, they do the same or even much worse, but also more sophisticated, because they have technology that communists didn't have. People are, and I saw it while I studied, so brainwashed that they will soon start blaming themselves for any wrong doings.

Fines that I mentioned are, of course, about magnifications of communist ideology. If this law is going to be adopted, and it has a great chance by the Croatian paper (there are more rightists than leftists in the European Parliament), all of us who still declare ourselves as Yugoslavs, will be in big trouble. I already see myself burning a big part of my household. I would have to get rid of many of my books and photos; I'd have to throw away all materials of my favorite photographer, who followed Tito for years; I'd have to get rid of all notebooks bought in the Belgrade Museum; I even couldn't give my clothes with Tito's prints to the Red Cross container, because the container would recognize my bad, evil communist purposes. I'd have to destroy old movies, ban the TV channels which broadcast old Yugoslav movies, and if someone mentions Tito, I'd have to shut them up. All of that I would have to do in the fear that the state will punish me with some hundreds or even thousands of Euros for my misbehavior.

If our little funny Balkan states ever join the EU, they wouldn't only have to ban rakija baking (rakija is a sort of brandy, schnapps) and traditional pig slaughter, but they would first have to destroy Museum May 25 and The House of Flowers, both in Belgrade. Graves of the Broz family would disappear. Then we'd screw up The Yugoslav Drama Theater in Serbia. Airline company JAT (Yugoslav Aero Transport) already changed their name into Air Serbia, but all the other things which remain of communism, we'd simply have to delete. In Bosnia, we'd have to close Cafe Tito, while Yugoslav restaurants all over the world would not run anymore. My 5,000 dinars banknote with Tito's print would end up in the fire, and the football game video cassette of Hajduk - Zvezda match in the plastic garbage (that's the famous football game when, after Tito's death, all players hugged each other and sang together with the whole stadium). Facebook group SFR Yugoslavia that has 160,000 members would disappear. Many symbols would be simply liquidated, the same way Enver Hoxha liquidated religion, destroying all mosques and churches in the country. Because of Stalin, Hoxha, Jong - il or another governing idiot deeds in the history, those who didn't live in these rigorous systems will suffer and pay the price. This liberalism that we hear fairytales about, would be called democracy and freedom. Croatia will maybe very soon meet the real problem, because they will have to ban visits to Tito's house of birth in the town of Kumrovec. All pilgrimages that remind to the red color will be just erased from our memory.

Will this law be adopted, remains to be seen in the near future. Those who hold anti-liberal ideologies for important aspects of life will consider to move somewhere outside of the EU. Maybe our history will be really deleted and removed from our minds. If the liberals don't completely succeed, communism will stay alive only in the illegality, but then it will maybe have a better chance to arise from the death. While we're waiting in the illegality, we'll probably repeat quietly that there is no communism like liberal democracy. Maybe in the illegality we have a better chance for survival, because now we have all rights, but only on the paper. In practice, we have nothing left.