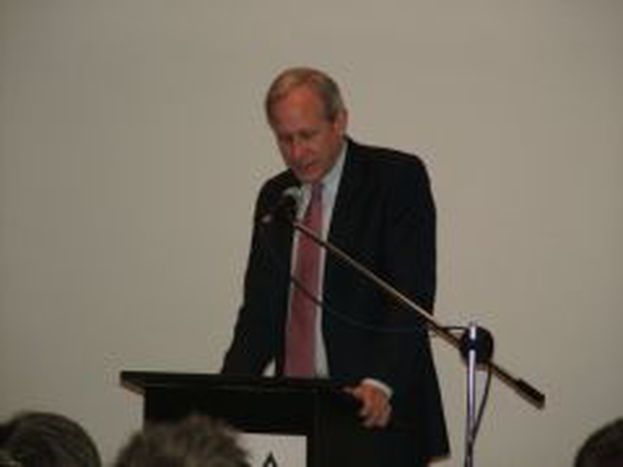 By Zsóka Montvai Wikileaks might be seen as a trumpet of truth or as an infectious disease, but it can certainly be affiliated with the new generation of ethical and legal issues evolving around Information freedom and the mainstream media.

On the behalf of the prestigious , , the Vice president and In-house lawyer, visited Budapest and held a public lecture entitled at the (OSA) on the 16th February, co-organised by the (CEU).In his lecture McCraw first described how The New York Times encountered the Wikileaks phenomenon and formed an alliance in publishing with and . The collaboration began on July 23rd, when the Times editorial office received a call form The Guardian informing them about leaked collections of classified documents obtained by Wikileaks. Since then, the newspaper published revelations on Afghanistan and Iraq, as well as a high number of diplomatic cables. However the path to this point was surrounded by legal and ethical hurdles.

The New York TimesDavid McCraw“Law and Disorder: Wikileaks and the Future of Information Freedom”Open Society ArchivesCenter for Media and Communication Studies of the Central European UniversityThe GuardianDer Spiegel

The most conspicuous problem the Times had to face was the reaction of the affected governments. McCraw discussed the concerns of the partnership with the Guardian as they operate in a completely different legal system. For instance the press in the UK must consider the possibility of an injunction preventing them from publication. As associates, how would such an injection apply to The New York Times? Besides these foreign policy issues, The Times also had to evaluate the possible application of the US Espionage Act of 1917 on the field of journalism. In spite of the fact that no reporter, journalist has ever been prosecuted under the Act, the risk is there. What gives an interesting dynamic to the issue is the First Amendment providing news outlets with the right to publish. Later, McCraw emphasized the importance of The Times contacting the government before publishing. At this point they parted ways with The Guardian as they did not support this initiative at any level. The White House did not welcome the idea, and warned them to handle the documents as sensitively as possible. The Times, as McCraw detailed did not want to put any source or civilian in danger by revealing the documents, so their tech staff and reporters worked together on editing the information. He also pointed out the transformation in Wikileaks attitude on editing. At first it dismissed the mainstream media for changing names, dates etc., but after the hard criticism they received they actually “adopted the viewpoint of the mainstream media” – said McCraw. As McCraw described the legal and ethical dilemmas of the Wikileaks phenomenon, he depicted a broader issue regarding the special protection of the press. “Who gets a press pass?” Does Julian Assange, or any citizen journalist, blogger qualify for the same free speech privileges that journalists enjoy? The boundaries between the sources and journalists seem to fade in the diversity of today’s media platforms. As he pointed out, it is less important to know “who is a journalist” than “what journalism is”. He suggested to protect the actors of journalism, based on their activity of journalism rather than on the individual actor. He also highlighted the values of confidentiality and secrecy, but not on the expense of source protection, as leakers do play an important role in civic conversation. The government, he argued, has the right to keep secrets but it should not be done by “going after the press”. On a final note, McCraw indicated that the institutional media still has a very significant role even in the era of Facebook and Twitter. After all the Wikileaks incident showed that The Times and other “dead tree” media had done what Wikileaks could not, they “put this information in context, distill it, give it a perspective and give it attention”. Regarding the future he seemed to be pessimistic, and he fears the government authorities will draw the wrong lesson from the Wikileaks drama. After all, only a diverse free media can act like a watchdog on the government. For the full-length lecture, see this uploaded by the OSA and CEU.