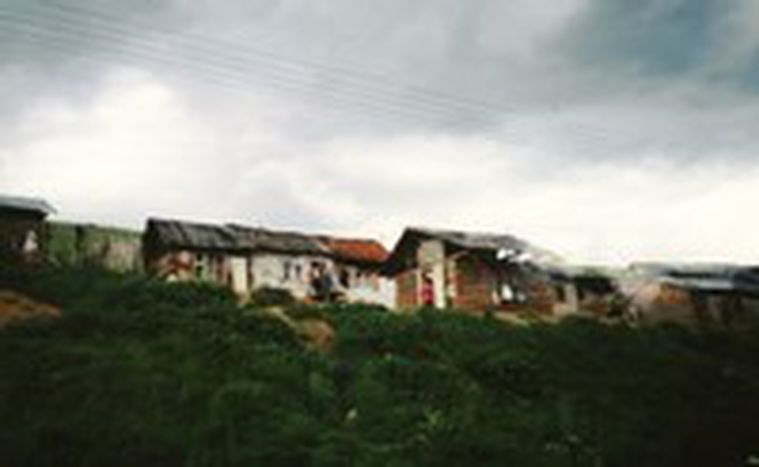 The suffering of the Roma

Between seven and nine million Roma live in Europe, most of them in the new and prospective EU member states. They have a low standard of living and they suffer from being neglected by governments.

February 2004 in eastern Slovakia: More than 2,000 soldiers and police are dispatched to an area predominantly inhabited by Roma so as to calm civil unrest and looting which is taking place. Since Mikulas Dzurinda became Prime Minister of Slovakia in 1998, discontent and bitterness have been growing in the region. Social security and support have been cut back significantly, and the living conditions for the Roma in eastern Slovakia, in particular in the Kosicky and Trencinsky regions, are particularly harsh. There are hardly any connections to the national grid or the transport network, and unemployment is high.

The Roma, of whom there are between seven and nine million in Europe, have their own language and probably arrived in Europe from India at the end of the 13th century. They have never really assimilated and have neither a uniform religion nor their own territory. In most countries they are a minority group whose needs are, more often than not, neglected.

The governments of eastern and southern European states often have very different attitudes towards the Roma. Laws against discrimination are a rarity and ensuring their integration is a task often left to Non-Governmental Organisations (NGOs). Even the political watershed of 1989 did not improve their situation. As the Czech author Andrej Gina, himself a Roma, noted in an interview with the magazine Literatura, “the social status of many Roma has fallen significantly. Communism offered more security, our people had work and a regular income, an apartment from which no one tried to evict them”. That is different today, according to Gina “Nowadays you answer an ad in the paper, are invited to an interview, but as soon as employers see you they go into hiding”.

The largest community of Roma in Europe – some 2 million poorly educated people – live in Romania. The situation does not improve as you travel further south onto the Balkan peninsula. At the end of the Kosovo War in 1999, some 560 Roma still lived in the Zitkovac refugee camp in northern Kosovo. The camp is near an old lead mine, with the consequence that the inhabitants are being slowly poisoned. It took six years and significant pressure from NGOs for the head of the UN mission in Kosovo to decide to relocate the camp.

Hundreds of such cases can be found in eastern and southern Europe. Often they are cases of discrimination by the local population, and the authorities are rarely take any notice. It has been partly possible for the situation to deteriorate to this level because the Roma have failed to establish representation at a national level – every Roma organisation which takes the right to speak on behalf of the Roma people has, sooner or later, been discredited. The Roma elites are plagued by infighting and have distanced themselves from their fellow people. These disagreements and this fractious infighting have their origins in, and can be explained by, the clan-like structures of Roma society. The result: groups representing the Roma do not present a united front or a unified list of demands to national governments. The state can then allow itself to sweep the problem under the carpet, making hollow statements without concrete content or action.

The helping hand of the EU

The Roma of Romania, Slovakia and other states of the former Soviet Union often try to escape their tragic situation though emigration. Canada, Great Britain and Germany are their principal destinations, but it often ends in disappointment, lethargy, alcoholism and a life of state benefits.

Although the EU cannot dictate the social policies its member states are to adopt with regard to the Roma, Vladimir Spidla, EU Commissioner for Employment, Social Affairs and Equal Opportunities, emphasised in an interview he gave in July 2005 to the Czech weekly magazine Ekonom, that the EU can lend its member states a helping hand in the form of the Social Fund. This fund offers a means through which the social ostracism of the Roma can be overcome. For Spidla it is, however, not a question of insufficient financial resources, but one of a lack of sensible projects on the part of the authorities and NGOs.