The story of a Belgian who ran 10 km in North Korea...

Gathering friends, talking to them about the Pyongyang marathon, then going to North Korea and winning the 10km race. On 9 April, Olivier Dauw did something most people deemed crazy. The young Belgian delivers his experience between cold noodles and intimidation.

Olivier is what we call a globe-trotter. After graduating as an engineer and a few years working as such, the young Belgian set course for Africa before flying to Singapore, where he currently works for Uber. But in between his adventures, Olivier found the time to travel to North Korea for a 10km race and a whole bunch of memories.

cafébabel: How did you hear about this race?

Olivier Dauw: By coincidence. Last year, my friends took part in the race. I thought to myself: “I absolutely have to go!” So I asked them how to participate. Then I talked to other friends, we formed a small group and we left.

cafébabel: Of all the races in the world, why did you choose this one?

Olivier Dauw: To be honest, we weren't there for the race. It was rather the possibility of going to North Korea that got us interested. The marathon is the only international event that this country organises. We thought it would be nice to combine the experience of getting to know the country with a unique event.

cafébabel: Who were the other participants?

Olivier Dauw: Participants come from all over the world. We met Europeans, Australians, Asians, Americans, etc. There is no real dominant nationality. All nationalities are allowed to participate except South Koreans and Malaysians. Following the assassination of the nephew of Kim Jong-un in Malaysia, they are no longer allowed to set foot on North Korean soil. The race hosts a maximum of 800 foreigners. Of course, many North Koreans compete as well, including many children. In the streets, parents are there to encourage their children and their families. North Korea offers very few leisure activities, and running is a Sunday activity for them. 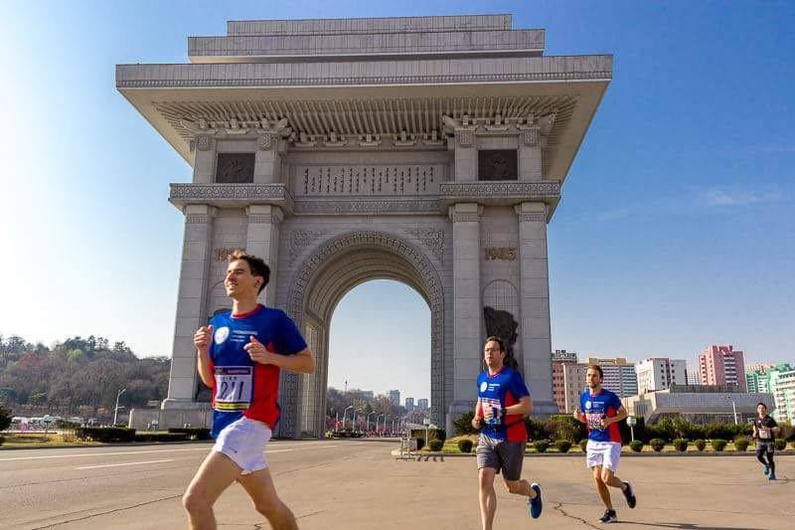 cafébabel: What was your relationship with the local population?

Olivier Dauw: On a daily basis, we were in contact with the part of the population that speaks English. In a way, this is the elite of the country: guides, hotels and museums staff, etc. They are people trained to be in contact with foreigners, which is not the case for the 'real population', like the people who work in the fields, for example. With them, we had the opportunity to discuss many issues, but we had to bear in mind that it could be a facade. It wasn't always clear if they were actually saying what they thought.

cafébabel: Surely you have a little anecdote to tell us...

Olivier Dauw: Every evening we had dinner in a restaurant in town. We were practically always alone in a small group of tourists. But one night, we met a family of North Koreans. We sat down next to them and started talking. And suddenly, they asked for their bill, had their food packed in doggy-bags and left. I guess they were afraid to say or do something that they were not allowed to do.

cafébabel:You are one of the few people to have crossed this 'iron curtain'. What was your first impression when you arrived there?

Olivier Dauw: My first impression was pretty normal. We arrived at an airport and everything happened as in every other international airport. Security is very strict, that's true. You have to be thoroughly examined; you have to open your suitcases, and sometimes they ask you to turn on the computers to show them the contents. In particular, they check whether there is any information about North Korea. In fact, they want to avoid showing the outside world to the North Koreans.

cafébabel: How was your trip organized?

Olivier Dauw : As there was a quota of 800 foreigners for the race, I had to book a spot in November. At the beginning of December, everything was full. In terms of price, I paid $1,400, including the visa, for 4 days departing from Beijing. Once there, we didn't spend much money except for a souvenir and drinks in a bar.

There, the foreign participants were divided into two hotels. One of the hotels was on a peninsula and was connected to the city by a bridge, and the other one was downtown. The services were impeccable and well-organised. The hotel was very clean, but it worked within the limits of the border given that they have access to a small amount of imported goods. There is not steak or French fries, for example, you have to eat local food: cold noodles or kimchi (cabbage in a spicy sauce) mostly. There was no internet, no phone connection either. I had not even taken my phone with me for the trip. I preferred to leave it in Beijing.

cafébabel: As we know, the issue of freedom of expression in North Korea is problematic. Did you receive any recommendations before the race?

Olivier Dauw: We received a guide with the regulations to follow for the race: there was no big logo, no advertising, no reference to the national colours. Even though the rules were rather strict, no one received any comments from the local authorities. For the race, we all had to wear an official shirt in the colours of North Korea. For official ceremonies, on the other hand, no shorts or t-shirts out of respect for the local culture.

cafébabel: And during the stay, how did the visits go?

Olivier Dauw: As a foreigner, one does not have the right to walk freely in North Korea. The only possibility is to go through a travel agency and this implies that guides are constantly supervising you. There are guidelines to follow. For example, if you want to take a photograph it is mandatory to capture the statues of the leaders in their entirety, with the landscape, to show their greatness and glorify the country. Another example is that, if you tear up a national magazine or throw it away, it can be considered an insult. 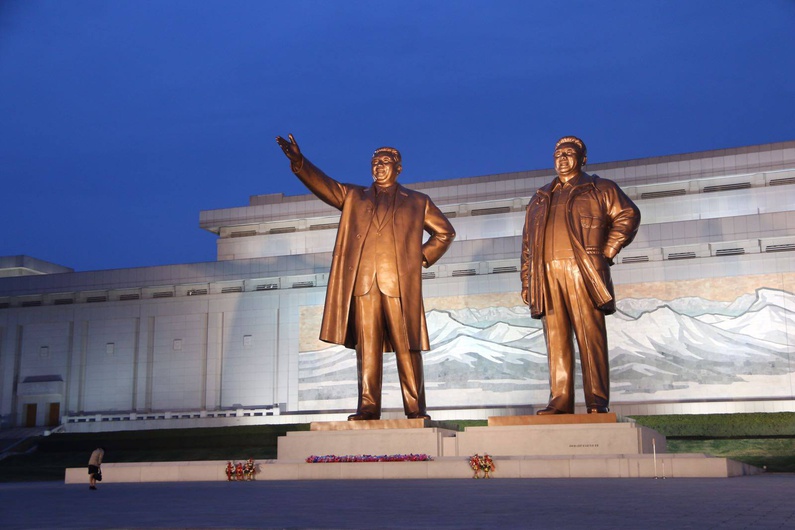 Once, I also had to delete some pictures when we visited the area surrounding the border with South Korea. I took a picture of a tower with antennas, and apparently it was secret defence. So yes, there are some rules to respect, but overall it was fine. In some developing countries, you can't take pictures of airports or embassies.

cafébabel: Did you feel oppressed by these controls?

Olivier Dauw: No, except perhaps when we visited the demilitarised zone. There they were quite oppressive and in a hurry. There were huge rooms with lots of documents about the Korean War and they only gave us a few minutes to look. We weren't supposed to analyse too much of what we were shown or ask too many questions. At the border itself, there were North Korean soldiers to prevent us from leaving the country. That was strange.

cafébabel: North Korea is one of the most isolated countries in the world. Its regime has been accused numerous times of violating human rights. Do you believe that participating in the race is a way of showing some form of support for this regime?

Olivier Dauw: I understand this point of view, but I don't think it's the case. From a financial point of view, tourism acts as a supplementary revenue for the regime. There are about 5,000 toursits per year. On average, they spend about $1,500 per person, which makes 7.5 million dollars per year. This is not a huge amount of money for a country. From a propaganda point of view, it's true that the regime could use tourist visits as a tool to appease the local population. On the other hand, international ambassadors show North Koreans that we are not hostile and humans just like them... So in turn, the negative propaganda is off-set by a type of positive propaganda.