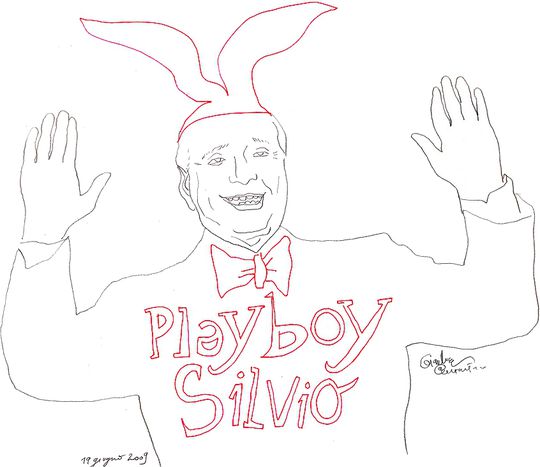 The Sound of Silvio: 'I never understood what the satisfaction is when you are missing the pleasure of conquest'

Escort girl Patrizia D'Addario, 42, told investigators that she spent the night of Barack Obama's victory at the Italian PM's private residence in Rome. In an interview with Chi magazine on 24 June, Berlusconi talks of defamation: 'I have never paid a woman'. Quotes from the Greek, Finnish and Italian press

In the daily the columnist Lori Keza pokes fun at the love life of Italian prime minister Silvio Berlusconi:

Uncle Silvio has certainly managed to do one thing: at 73 he's got the whole world talking about his supposed love life. Women, women, women. Does the old man perhaps want to send out the message that he's still sexually active? Medicine provides the answer. At his age he's a dud at best; and if he takes too many pills his heart'll explode. It makes no difference how much plastic surgery he has, how much hair he has implanted or how many gifts he distributes.

His sex organ just won't play along, and will call a quick halt to whatever adventures Berlusconi may have in mind. That is amply shown by the statistics. It seems that part of the population admires him for his conquests. Although the papers cast him in the role of an aging satyr [a lecherous figure from Greek mythology], he is topping popularity charts. Not in the surveys, but where opinion really counts, at the polls

The daily looks toward Italy in dismay:

In his long and many-sided career, prime minister Silvio Berlusconi has also worked as an entertainer and producer. Now it seems he's come back to this occupation once more. This time his style is burlesque, rendering even the most serious things ridiculous. The leisure time of the most powerful political player stops being private when he starts appearing in the company of masses of women, all bribed in one way or another, and when he is no longer able to give an honest answer when questioned about the nature of these relationships.

Berlusconi, who will play host to the G8 summit in Italy next month, is one of the EU's best-known statesmen and for that reason also a highly visible representative of the so-called European values in the world. A poor role model. In Berlusconi's third term in office it is clear that apart from women he also sees the legal system and freedom of opinion from one perspective: his own

Ernesto Galli della Loggia of the liberal-conservative daily complains that the personalisation of politics in Italy has taken on 'pathological dimensions':

A general void has taken the place of cultures and political parties. All that is left is people, naked people (in the truest sense of the word!). From this point of view (head of government Silvio) Berlusconi is far from being the disease. He is just the symptom. This Italian deviation is a return to antiquity. Politics is evaporating, only to be replaced by an Italy we thought we had long left behind us: a country in the hands of the few, of oligarchies who are interested only in their own power.

A country on the wayside which, cut off from the rest of the world, has lost a sense of a common destiny and been left with neither ambitions nor projects for the future. A country that does not love itself and which seems incapable of demanding anything of itself. A country that in the emptiness of its politics has exposed something else, something that very much resembles a lack of will or a moral void

The Berlusconi affair has also put the church in an embarrassing situation, theologist Vito Mancuso writes in the left-liberal Italian daily. Don Antonio Sciortino, chief editor of the catholic weekly Famiglia Christiana ('Christian Family'), has called on the church to clarify its position:

This means a public condemnation of the behaviour of the current head of government in view of his disregard for catholic morals. The answer of the church depends on which of the two sides of the church's soul prevails - the political or the prophetic. It is likely that the political soul with its accommodating stance will triumph.

The head of government will continue to count on the discreet and stout support of the church hierarchy, and will not fail to reward it accordingly. But one thing must be clear: the words of the church will hardly seem credible if it dares to defend the family yet again in the future