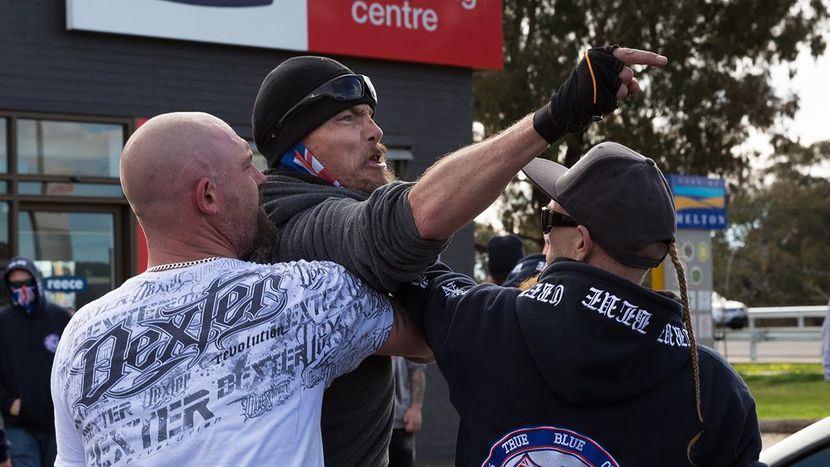 The Soldiers of Odin : vigilantism and mistrust in Europe and Abroad

Images of terror in concert arenas, markets and other popular public places haunt citizens of Europe after the dismal events of the recent weeks in Manchester and London. As popular artists such as Ariana Grande and The Black Eyed Peas belt out hymns of hope in response to these acts of terror, the media ceases to highlight the threat of radical extremism both in Europe and abroad.

As the Autumn 2016 Standard Eurobarometer Report highlights it, Europeans feel that the two greatest issues currently facing the European Union are immigration and terrorism. Simultaneously, a staggering 82% of Europeans report that they want the EU to do more to fight terrorism. In response to these concerns, a myriad of measures at the EU level have been implemented since January 2015.

Despite this, fear still emanates in the hearts of many. Some do not feel that these measures are adequate to address such pressing issues – the Soldiers of Odin are one of such groups. Originally formed in Finland in 2015 under the name of the famous Norse God, the Soldiers of Odin are a vigilante group that has seen rapid growth in Europe over the past two years. The group’s mandate: to preserve and defend communities from crime related to immigration. Reportedly created due to concerns involving various sexual assaults and crimes in Helsinki and other European cities during the New Years Holiday of 2016, the group can be linked to an overall dissatisfaction towards the influx of refugees and migrants coming to Europe, which they believe is linked to an overall decrease in security. While the group itself denies targeting people of specific races or religions, many have accused its members of white supremacy and extremism – the group’s creator being Finnish white supremacist, Mika Ranta.

While the Soldiers of Odin see foreigners as their main threat, the group also appears to hold a large amount of distaste for the internal state of security. Currently, the Soldiers can be found patrolling the streets in over 25 different locations in Europe and beyond, looking for ‘danger’ on the streets. In every location, a strong sentiment of mistrust towards the government and law enforcement system is shared. In an interview, members expressed their discontent, stating that the Finnish government has “screwed everything up” and that “politicians are allowing migrants to rape our women, and they are doing nothing about it”. The group often pairs this mistrust in government with grandiose claims about migrants’ involvement in the dismantling of safe, respectful communities.

A Movement: From Finland to Beyond

There is no doubt that Europe has seen a period of mass migration from those seeking asylum in EU member states. 333,350 asylum-seekers were given protection by EU member states in 2015. However, compared to member states such as Germany, the Netherlands, Austria and Sweden, Finland saw a relatively low number of people entering the country seeking protection. Nonetheless, the anti-immigrant sentiment remains strong in many areas of Finland. There is some evidence to believe that the actual number of migrants entering areas like Finland is less important to groups like the Soldiers of Odin than the symbolic threat that they represent. While crime and terrorism have physical repercussions, and are thus easy to label as the core threat, underlying these incidents, an ideological threat emanates. It is clear that the Soldiers of Odin do not see the influx of migrants solely as a threat to security; rather, they see this influx as an existential threat to their way of life.

This phenomenon can equally be observed outside of the borders of the European Union. The Soldiers of Odin have gained considerable traction in Canada and the United States even without a comparable mass influx of immigration as experienced in Europe. As well, similar to European chapters, crime and terrorism in the face of a complacent and irresponsible government is at the core of the American Soldiers of Odin movement. They argue that higher authorities exhibit an overall “lack of concern” for controlling immigration and respecting the integrity of American communities. In addition, they state that they hope to “work with local authorities” to be “their eyes and ears for the areas they cannot see,” implying that the current police enforcement system is lacking in some respect.

Reflecting upon the Soldiers of Odin movement: many have cautioned against the group’s potential connections to neo-Nazism, fascism, white supremacy, nativism and extreme nationalism. While these aspects of the group are certainly problematic and deserve attention, an underdeveloped criticism of the group lies in its general tendency to propagate sentiments of mistrust and fear around inflated – or sometimes completely illusionary – political realities.

The Soldiers of Odin patrol the streets to make “safer” communities in lieu of police presence; however, it has been argued that the opposite is the reality. Police in many of the areas occupied by the Soldiers have noted that the group’s patrols have not aided in stopping crime. Rather, the group actually adds to the level of insecurity in the regions that they occupy, as police resources are needed to monitor the group’s activities, which are often found to be connected to hate speech. Violence also appears to be embedded in this movement. Just recently, the group’s leader, Mika Ranta, received multiple penalties and an 18 month suspended sentence for assault.

In the book, Migration, Terrorism, and the Future of a Divided Europe,author Christopher Deliso notes that while the number of attacks committed by migrants was actually relatively low in Finland, the Soldiers of Odin were still able to turn into an international franchise due to the uncertainty created by the migrant crisis. Using this uncertainty as fuel for their movement, the group attempts to take the law into their own hands and, in doing so, further propagates mistrust and anxiety, channeling these sentiments towards certain groups of people and the political establishment.

The Soldiers of Odin are but one example of the impact that fear-mongering and finger-pointing can have on people’s beliefs and, ultimately, their actions. Riding the wave of xenophobia created by the crisis, the tendency towards dichotomizing people into ‘us’ and ‘the other’ categories has become a powerful form of rhetoric. Similarly, populist parties have capitalized on this rhetoric to garner support in many parts of Europe.

In a time where the political scene is so uncertain, how can the European Union institutions regain people’s trust and prevent the escalation of xenophobia and finger-pointing? In a recent Facebook Live interview on migration, employment and terrorism with European Parliament President Antonio Tajani, he argued that the future of the European Union “depends on us and what we are willing to construct.” Noting that many citizens feel “discontented” in terms of being protected by the European Union, he emphasized Europe’s role in “protecting our interest, our history, our culture, and, thanks to our identity, to open our doors to those who want to follow our rules and come to work in Europe.”

With reports on the threat of terrorism frequenting our television screens, social media and newspapers, European citizens as a whole will play a role in combatting xenophobia and mass institutional mistrust moving forward. While criticism can be – and should be – made of policy regarding migration and terrorism prevention, attention should be paid to not propagate overly inflated or false political realities. The Soldiers of Odin are not the first vigilante group in Europe to have taken an anti-immigration, anti-establishment stance and they will likely not the last. The presence of this vigilantism represents the development of internal mistrust in the European system.