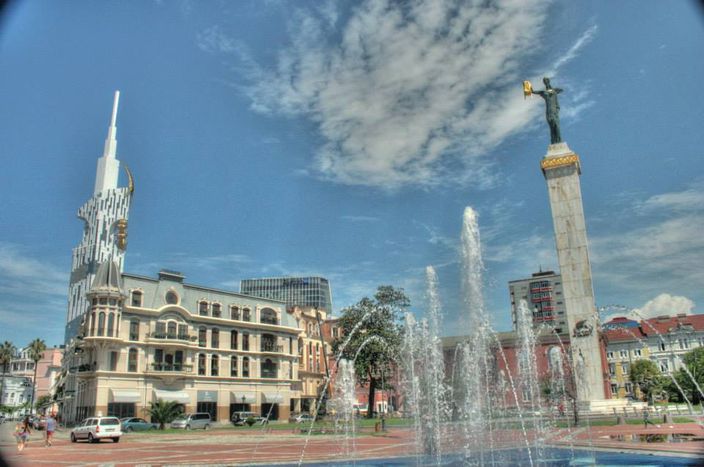 The Role of Ideology in Georgian politics

Yesterday’s inauguration of Giorgi Margvelashvili as a president marked the end of the most unusual event in Georgian politics – cohabitation. Now the Georgian Dream coalition is in control of almost every part of the executive branch. The question that inevitably pops up is what exactly is going to change and to what extent? The answer lies partly in the role (or lack thereof) of ideology in Georgian politics.

None of the two main political forces in Georgia seem to be ideologically to the left or right. This is a specific characteristic of the Georgian party system. The last presidential elections, just like every other election before, was a competition between two personal catch-all  parties. These are parties that have one, very influential leader and aim to attract all sectors of society. Because of the lack of democracy and the soviet legacy of authoritarianism, if the party did not have a vast ideology that was able to incorporate EVERYONE, then that party would be unsuccessful. As the role of parliament has never been crucial in Georgian politics, some parties elected in parliament would choose not to enter it and keep the competition in the street. Even the names of the leading parties and coalitions indicate that to the party’s main goal is to include everyone. For example Eduard Shevardnadze’s party was named the “Union of the Citizens of Georgia”.  This is largely the reason why some say that in Georgian politics the winner takes all.

These facts suggest that ideology does not play an important role in Georgian Politics. This was well illustrated when the Georgian Dream drafted the new labor code. Former minister of Education, who was made president yesterday, criticized the new code and said it was the dream of Rosa Luxemburg and a nightmare for business. The Justice Minister responded that the draft was just the first step in a wave of pending reforms. As is evident from these comments, ideological differences between high level executives are frequent, especially within the parliamentary wing of the Georgian Dream. There are nationalists, right wing liberals and social democrats all on the same side.

In fact, some think that GD and UNM have the same ideological basis. The former Minister of Environment and Natural Resources Protection of Georgia and member of the UNM parliamentary group,  once jokingly posted on his Facebook page, that the difference between the UNM and the GD is so small that he thought that people just didn’t like what UNM members look like so they go for the GD.  Indeed, many people think that the policies of the UNM and GD coalition are the same and that the GD’s success can be attributed to this– they occupied the centre of Georgian political space and put the UNM in the right corner of quite a large room of ideological differences.

It is true, that for such a coalition to work there needs to be some kind of uniting force. The Georgian Dream had two main such factors – Bidzina Ivanishvili as a hero and Michael Saakashvili as a villain. Now both the hero and the villain have left the Georgian politics. This is also unfortunate for the United National Movement, a party that will have to cope with many new realities. UNM has libertarian, nationalist, and also centrist members, and they don’t seem to have a consolidated opinion on various issues. For example, some members of the UNM were openly against illiberal church practices while other members seemed to either support these policies or remain neutral.

What is it then, that the Georgian people vote for? The usual practice in Georgian elections is that Georgian people never vote FOR ideas and people, but AGAINST them. When Georgians elected Shevardnadze with 70 %, they voted against the forces that allegedly wanted destabilization in the country and thus stability was a keyword in Shevardnadze’s campaign. After the Rose Revolution in 2003 Georgians voted Against Shevardnadze. In 2012 people also voted against Saakashvili, rather than for Ivanishvili.

The only way out of this one-person-party system is to strengthen the role of parliament and change the cartelization of parties. If a party with a strong leader wins the vote by 75 % again, it would indicate the failure of the democratic change that is expected of Georgia. That is why intra-coalition differences within the GD are positive at this point.