The pro and anti-American divide will also divide the Right

It is often said that right-wing foreign policy is pragmatic and based on clear-cut ideas. This maxim will become less valid in the future, especially following Bush’s re-election 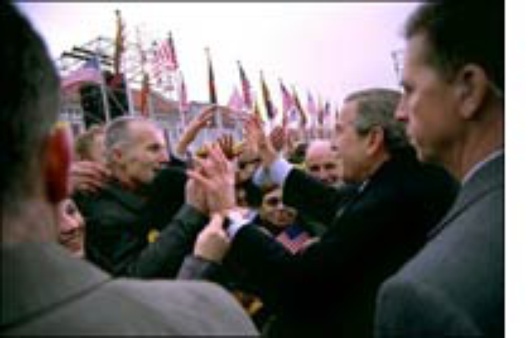 In Italy, people often say that the Right has much clearer ideas about foreign policy than the Left. The American election results seem to support this theory. Bush won, so the story goes, because his position was more clear-cut than Kerry’s, especially on the “war on terror” which is the leitmotiv of current US foreign policy. Kerry on the other hand, who had hoped to benefit from the anti-war vote but without appearing to be too soft, adopted a more ambiguous but less reassuring line. But, over and beyond the American example, is it really true that the European Right has such clear-cut ideas? They certainly did until 2001, the year of military intervention in Afghanistan which, at least for the electorate and public opinion, confirmed that the Left was anti-war and potentially anti-American, while the Right was still pro-American.

I’m more European than you!

The refusal by France and Germany to participate in the Iraqi military adventure subsequently introduced an overwhelming destabilising factor into the political game; namely Europe. Paris and Berlin cleverly took advantage of the Iraq crisis to better highlight their European colours and seized their opportunity by pushing the rank and file, including Belgium and Luxembourg, into a powerful European collaboration over foreign and security policy. Thanks to their ‘no to the war’ cry they became the idols of pacifist Europe, and the catastrophic post-war situation in Iraq has only strengthened their position.

In the 1990s, when the US was the world’s only remaining superpower, Europe’s statesmen had no choice but to extend the hand of friendship to the US. Today, the US is seen as anti-European which creates a bad impression, not least for those on the political Right. It will not be so easy for the Right to say ‘we are pro-American’ in the future because national leaders will have to take into consideration the European position as well as that of their own country. It will presumably become increasingly difficult for the Right to simultaneously run with the European hare and hunt with the American hounds. The risk of having to hand over ‘Europeanism’ to the likes of Schroeder is great.

Bush’s unpopularity is a real problem for pro-Americans

A good number of the states which signed the European Constitution in Rome share a desire for gradually developing closer co-operation within the Union on foreign policy. However, such a development will surely have consequences for relations between right-wing European governments and Washington, which has never viewed the idea of a strong Europe positively and therefore would prefer to divide it. Berlusconi, who is one of the United States’ most loyal allies, has been enthusiastically pro-European in Rome and is supporting a campaign for an EU seat at the UN Security Council. Meanwhile, America’s Italian buddy has been dropped by the White House with little in the way of compliments now that he has done his duty in Iraq. It now seems certain that the Right will soon be facing the same problem as the Left regarding foreign policy, namely what form relations with the United States take. If in the future we have one European foreign policy, common to both the Left and the Right, they will both have to sacrifice some of their values. Bush’s re-election could accelerate this process. His unpopularity on European soil makes it difficult for anyone to be his friend.

Will siding with the United States help the Right to win?

But is foreign policy, usually one of the Right’s strong points, still contributing to its success? In Italy, many are afraid that a confused Left could adversely affect the country’s foreign policy, but what about Spain? The Popular Party will no doubt think long and hard before siding with the US against the wishes of 80% of the population, as was the case in the Iraq war. However, the Tory party would probably do just as Labour has done if it came to power, despite the fact that the opinion of the British public on the lies told during the Iraq campaign is well known. In Germany, diplomatic sources have disclosed that during the 2002 election campaign, when victory for the Christian Democratic Union (CDU)seemed certain, Stoiber travelled to Paris to strengthen Germany’s relations with France. As is well known, the election was eventually won by Schroeder’s Social Democrats, which then launched a pro-French, anti-American policy.

It should not be forgotten that the situation in Germany demonstrates most clearly the confusion from which the European Right could suffer in the future. The conservative leader, Angela Merkel, was keen to show her support for America during the Iraq crisis but voices critical of the USA are being raised in the ranks of the CDU. This is symptomatic of what could happen to other European conservative groups.