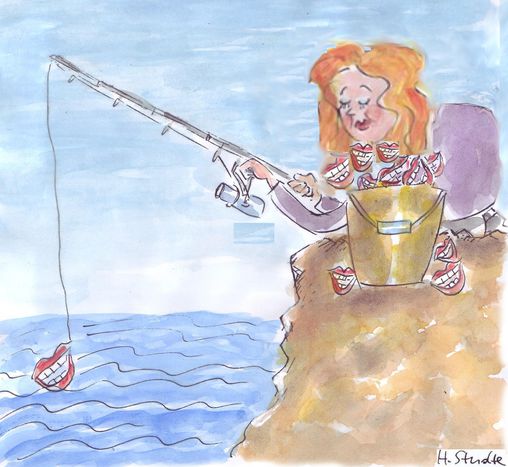 The principle behind 'fishing for compliments'

That’s what our outgoing Italian editor was constantly doing to us at cafebabel.com. In tribute (to herself), she looks at how the act itself is about man hunting for humanity, especially when confronted with globalisation and the atomisation of modern society

Insecure? Sad? You're probably seeking reaffirmation from those innocents around you. Do you feel stupid? Fat? Horrible? Italian? The trap is set to drown in a sea of lamentations.

But you need to hear that you’re clever, skinny, cool and Italian.

You say you're simply nostalgic for the values we shared, back in the good old days when we were all much more close-knit as a society. Why is it more difficult for those around you - be they loved ones or colleagues - to understand this need? Today more than ever, we get turned on with accusations of fishing for compliments . Attacked, simply, out of a very crucial need for approval.

The English expression is used mostly in recognition of those who have the tendency to lower themselves to guarantee the warm words of others – delivering a statement in such a way that your audience absolutely has to compliment you by means of a response. Fishing for compliments is exactly the opposite of two European expressions, both symptomic of arrogance. S’envoyer des fleurs(to send yourself flowers) is the French equivalent of don’t flatter yourself . The Spaniards have a more cultural comeback. If someone has just raised an eyebrow at you and asked: Tú no tienes abuela?- don’t you have a grandma?, then they're accusing you of not having a matriarch who would butter you up instead.

To defend the saying, fishing for compliments remains faithful to humility, fear, insecurity, and - let’s open the floodgates - tenderness. In light of modern society’s evolution, of the exchange of interpersonal relations and in a context in which the individual finds themself ever isolated and in competition with their neighbour, could we perhaps consider fishing for compliments as the individual’s reply to globalisation? A return to humanity where humanity disappears?

Young Europeans! Today, fearlessly and courageously, in the face of the economic crisis, international mobility, the cost of life and the search for a darned job, turn to your neighbours, to your families, to your friends, and why not your colleagues. Demand a healthy return of compliments which were so easily to get a hold of in the good old days. Because fishing for compliments is not dead.

An immense thanks to the clever, skinny, cool and Italian editor of cafebabel.com January 2008 - July 2009. Do leave your compliments to her in our comments boxes below