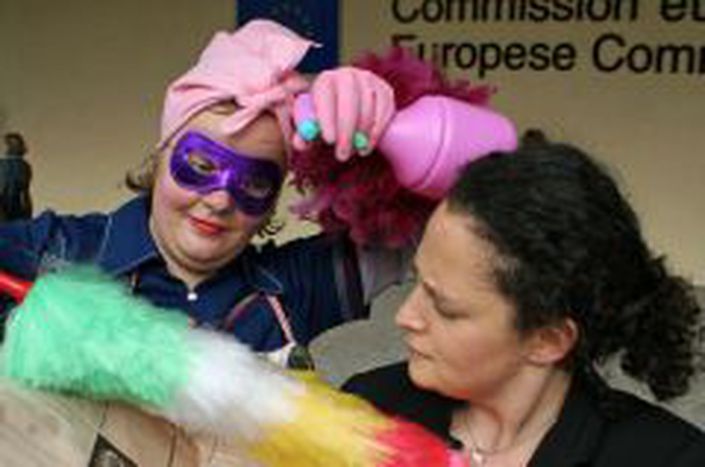 By Alice Préat translated by Benedetta Pagotto« Lobby »: a bad connotation is associated with this word. One imagines corruption and bribery. Yet it is a widely accepted practice in western political life. Most legislators believe that public and private interests should play a role in the creation of legislation.

Nevertheless, lobbyists' behaviours are not always legitimate and acceptable, as organizers are seeking to demonstrate.

Between roundabout Schuman and Place du Luxembourg, more than 15,000 people get up every day, trying to put forward their points of view, opinions or interests in European legislation. Lobbyist' number is constantly increasing in Brussels, but despite Lobby cleaners' efforts they are still hidden behind a veil of mystery.Worst Lobby Award

Business lobbies represent over 70% of total Brussels lobbyists. , from Friends of the Earth an organisation taking part in the action, explains being against bad practices, not against lobbies as a whole. « ».

Paul de ClerkI am a lobbyist too, but some misbehaviours are not acceptable anymore. Several lobbies justify their conducts with the argument that United States neither have a bill on this issue, so why should Europe have its own? Those same companies will then repeat this argument in the United States!

In 2010 the winner of climate section of Worst Lobby Award was While this firm created a huge advertising campaign to demonstrate its “green” credentials, RWE npower lobbyist actively advocated to maintain coal plants and oil installations. Within the financial section, the winner of the prize is. Aiming to protect its offshore financial products, nicknamed mass destruction financial weapons, this firm launched a great lobbying campaign, while those products are the main responsible of 2008 financial crisis.

Since some years ago, and especially since Lisbon Treaty ratification and increased Parliament power, MEPs are more targeted by lobbyists. Today there are several projects proposals to have a compulsory common register, but no one seems to succeed. A directory of the accredited lobbyists in European Parliament is available on its website, but this list is different from the one by the European Commission. Furthermore lobbyists’ registration is not mandatory, making those registers incorrect and not clear.

Brussels lobbyism therefore remains not transparent and unbalanced. According to the situation cannot be compared to those in Member States: «».

At the EU level, civil society and NGOs lobbyists only account for 10% of the total. An uncommon disequilibrium? «», explains Paul de Clerk, «».

We can compare European Union lobbies to those in the United Statesbut still, one of the biggest lobbies in Brussels, European Federation of Chemical industries has alone more lobbyists than all environmental organisations existing in the city