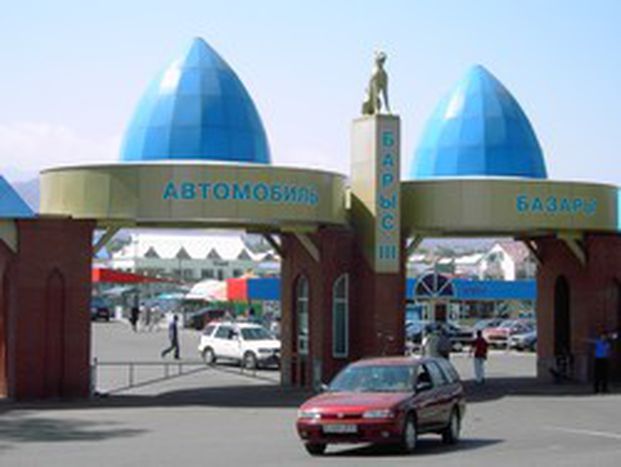 The leopard prowls the Silk Road

Kazakhstan holds a key position on the Asian highway network which criss-crosses 32 Asian states. At the used car market “Barys”, traders discuss the merging of Europe and Asia

A hot August Sunday, a long column of cars goes slowly from Almaty Westwards on the highway linking the Kazak capital to Kirghizistan and Uzbekistan. A convoy of metal and steel heads westwards from Almaty. After an hour’s drive my bus finally reaches its destination – thirty kilometres from Almarty lies Kaskelen. A cheerless town in the middle of a no man’s land of dust and rubbish. There is only one reason why visitors venture here – the used car market -“Barys” draws people from all over central Asia to Kaskelen.

The Pride of the Nation

The “Barys” has a strategically advantageous position along the “Almaty-Bischkek-Taschkent” section of the Asian Highway Network, the motorway network which joins and crosses 32 Eurasian countries. It is also known as the new Silk Road. The building of the network has only just begun, but by the end it should link and cover the 140 000 kilometres which stretch from Europe to Asia. Skail Semembaew, the director of the car market, has great hopes that the new Silk Road will bring the European and Asian people closer together. Barys will also benefit from that,” says Skail.

The director tells about his market: “Barys means snow leopard in Kazakh. This animal is the emblem of Kazakhstan and the symbol of our market.” Skail shows me newspapers in which the Barys is declared “the pride of the nation”. “Our snow leopard is the largest car market in Central Asia. Every day 5 000 cars find a buyer, at the weekends it is sometimes even more,” he tells. “Most of the cars here are from Europe.”

Europe – for the people at the Barys market, just like for people all over Kazakhstan, Europe is a magical word. The car traders I meet swear friendship between Europe and Asia. The numerous cafés at the market serve “European cuisine” and people wear labels from Italy, Germany and France. Skail emphasises that “both continents are not only economically but also culturally close”.

While the director gives me the tour, announcements thunder out of the speakers on the market: “A nearly new Renault with air conditioning for just 17 000 Dollars, for just 30 000 Dollars you can get a Mercedes in top condition”. Skail explains with a wink in his eye “Everyone here wants a German car. Mercedes is the most popular make.”

A group of men have made themselves an awning between a couple of Japanese Jeeps. There Hassan, a Kurd, sits waiting to sell his Toyota. When he finds out that I am from Germany, he calls me over to his table, offering me his shashlik pipe and beer. Hassan uses the opportunity to test his notable German on me. “I often travel to Germany and buy cars there. The quality is superb,” he finds. Hassan offers to photograph me together with his Turkish colleague Muhrad: “Here on the market we are all friends, even Turks and Kurds”. Hassan laughs. “This is a place of cultural friendship.”

We continue to stroll over the market which covers some 30 hectares, past shashlik smoke and ice cream vendors. Skail explains the principles of the used car trade to me: “The traders travel to Europe where vehicles are significantly cheaper than in Central Asia. Here they are resold. Many customers come from Kyrgyzstan or Uzbekistan. They then transport the cars to markets in their countries.”

There are two principal routes between Europe and Central Asia which the second hand car trade take. “Either they come directly from Germany and drive via Poland and the Ukraine” the director explains. “Or they come from Lithuania and drive via Russia”. Two different routes, two classes of cars, two faces of Europe: “The expensive, high quality cars come directly from Germany. They are fairly new and in good condition. Mercedes, BMW, Audi” Skail lists with wide eyes. The director does not show quite as much enthusiasm and respect for the cars which come from Lithuania to Kazakhstan. “The Lithuanians are masters at tinkering. They buy older cars in Western Europe which they then repair and polish up. That way three old cars sometimes make one new one,” Skail laughs, having himself transported cars from Europe to Kazakhstan years ago.

The used car trade has become a significant segment of the Lithuanian economy. Donatas Askinis, press spokesperson of the Lithuanian embassy in Almaty, is happy that his country is a neuralgic point in the international trade in used cars. “52 percent of all exports from Lithuania to Kazakhstan are used cars from Western Europe. This is great for our country. The embassy supports the trade as much as it can” says Askinis. It issues between 150 and 300 visas a day, 90% of them are for car traders from Kazakhstan and other Central Asian countries.

Nikolai has just acquired a used car in Lithuania so as to sell it on at the market in Kaskelen. The Russian’s Honda clearly shows the signs of Lithuanian tinkering. He is in two minds about the new Silk Road: “The motorway network is bound to be a good opportunity to merge Europe and Asia. But I don’t believe it will be advantageous for this market. Lots of smaller competing markets will open up along the route. The great snow leopard might well die as a result.”