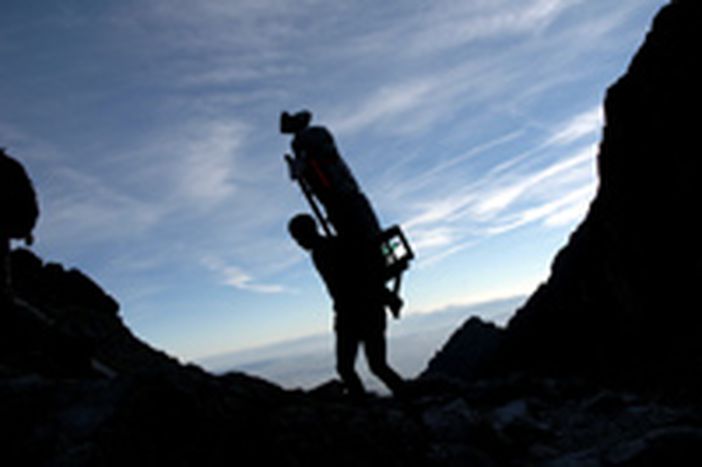 The last of their kind

Of all the European mountain ranges, it is only in the High Tatras that the mountain huts are supplied by foot. And every year the porters organise a rather unusual annual competition – the Sherpa Rally.

A cloudless blue sky stretches across the High Tatras. The mountains near Poprad tower up to 2632 metres high, like fists above the plain. It is shortly before midday when 54-year old Victor Beranek stands in front of the middle station, Hrebienok, and directs his first words at the gathered people, “Dear comrades!” He pauses briefly, “Oh, excuse me, that is one of the old speeches,” and waits until the laughter of his listeners has subsided. He then ceremonially welcomes all participants and onlookers to the twenty-first Sherpa Rally, the annually contested mountain porter challenge. This year there are almost 800 metres to climb to Terry’s hut at 2015 metres. The first participants arrived two hours ago to load up the wooden frames to be strapped to their backs. They alternately load lemonade in luridly coloured plastic bottles and bags filled with coal . The contraptions are one and a half metres high and the weight of each is set with a pair of scales to 60 kg for men and 20 kg for women.

The competition has a tradition. It all began 21 years ago when the High Tatras still lay in Czechoslovakia and the central government in Prague was communist. The men of the mountain rescue service supplied the mountain huts with food and coal that they carried uphill on their regular rounds. It was a man’s world and one is which it was common to trade stories of carrying the heaviest weight in the least time over a beer in the pub. But in 1985 Victor Beranek decided to organise the first official porters’ competition with eight men. “We simply wanted to know which of us is the best,” he explained. Today the four-time Sherpa Rally winner does not limit himself to the welcoming speech, he runs with the other 36 men and 13 women in the direction of the peak.

Little remains of the previously pleasurable atmosphere in the midst of combat. The load-bearers stare intently on the soft ground overgrown with roots. The light shines faintly through the thick treetops and one false step can have terrible consequences. As the first difficult climb begins,,the carriers wind like a string of pearls, battling 400 metres up the slope. The Olympic kudos associated with the event is what stimulates the participants. “About 70 percent of carrying is about overcoming the pain,” says 25-year old Ivan Manga, gasping. It is his first time taking part in the competition, although he has years of experience as a porter in the Tatras. He leans his rucksack against a stone and wipes the sweat from his brow. “You have to pace yourself and know your rest spots, otherwise your thighs will give out in the last third of the race,” he advises.

The Sherpa Rally is unique in Europe because only in the High Tatras do porters still supply the mountain huts. In the Alps or other high mountain ranges the huts that lie off the beaten track have long been supplied by helicopter. The porters in the Tatras normally receive around 10 Slovakian Koruna (0.26 Euros) per kilo. The rally benefits the huts as they are supplied with almost a quarter of a ton of goods at no cost.

The string of load-carriers has dissolved. On the middle, gently ascending section of the climb single white bags of coal flash from within the lush green of the bushes. They come together again at the steep, grey wall of stone the forms the final third of the route. Every serpentine bend is used to take a break. The isotonic drinks slowly run low. Ivan Manga’s water is also finished. The pain in his thighs can be traced on his face with each step he takes. Quiet curses mix with heavy breaths, “I can forget winning,” he says resignedly whilst looking at his legs, which are shaking with exhaustion.

As soon as the first onlookers on the ledge above become visible to the racers, and the wind carries the sound of their cries and chatter downhill, thoughts like these disappear. The end is close and the pain soon over. With swift steps Ivan Manga veers around the final crag and runs across the finishing line with a wide grin. The referee’s stopwatch displays his time: 1 hour, 55 minutes, sixth place. “And now for a beer,” he says happily, letting his heavy load glide from his shoulders as he disappears into Terry’s Hut.

Victor Beranek runs comfortably across the finishing line half an hour later, and after another hour after the final contestant has crossed the line, he leads the award ceremony. He awards certificates, beer pitchers, medals made of dough and, for the victor, a wooden trophy crowned with a small Sherpa beaver. “The most important thing is not the prizes, nor the times,” he says. “The nicest thing about the Sherpa Rally is that we all see each other every year in the mountains and have fun.”