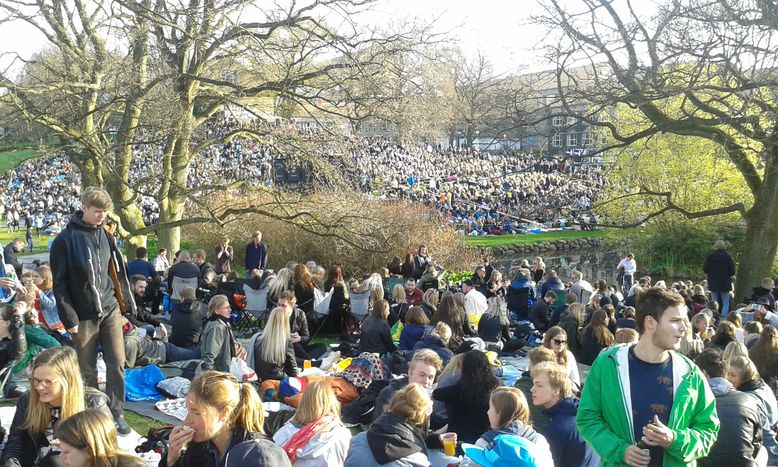 The largest student party in Europe

Aarhus University holds a boat race in its University Park each year since 1991. Over the years, it has become the biggest student party in Europe which I knew nothing about until I moved here – A review.

The Aarhus University website describes the race as the following: “The race is a beer-drinking relay race involving representatives from different courses at the University.” This year, it was the Economy department, Psychology, Law, Dentists, Medicine, Journalists, Sport scientist, Nurses & Teachers, Computer scientists & Physicists and Political Scientists competing against each other. “They all have to row across the lake, drink a bottle of beer, run around the bottle ten times and row back again.” On the other bank, the next team member waits to take over the boat. The fastest team wins. There are two rounds, the first one with three races and the finale.

Who cannot picture it, here is an impression (watch from minute 1:30):

However, this race is just a part of the event called Kapsejladsen in Danish.

For some, it actually starts the day before. Friends of mine said: “We start drinking the morning the day before, so that we can go to bed early.” This means, if the race is on a Friday, they play beer bowling the entire Thursday to get into the right mood. Of course, when being drunk, not everyone manages to go to bed as early as planned but fortunately someone will make sure every alarm is set on half past five to get up in time for the event.

After three hours of sleep the welcome in the kitchen at six in the morning is a shot. The motto of the day: never sober up. Many people already are in the park at four am to get the bests spots with the best view and start drinking even earlier.

Arriving at seven am in the University park however means that you are already too late for a spot that would at least show the transmission on one of the screens. Music is already playing loudly from speakers everywhere.

Everywhere, there are people on their blankets, camping chairs – those living nearby brought couches – have breakfast and beer. At 12 am will the naked run (people running a race entirely naked and jump into the lake in the end) and only at 2:30 pm will be the first race.

That means, more than 30.000 Danes have been drinking for seven hours when the party really starts. The national radio covers every single step from a raft in the middle of the lake, reporters with their cameras are everywhere. Red Bull has its tents all over the place.

The departments that really care about their team dress up in the same colours – yellow hats, orange t-shirts etc. Every team has a show with dancers and costumes  to introduce themselves. I see a Pokemon Show, a Pirates of the Caribbean Show... and if it not a team introduction, then a play about Leonardo di Caprio’s TV roles  by the Aarhus University Party department or performances of famous Danish artists to entertain the crowds.

After the first race the park gets wasted. As the people start to run around and dance, every blanket, bag, chair, piece of clothing gets stepped on and left in the dirt. Beer cans and empty bottles are everywhere. People get so crazy that it is hard to understand why rumours about this party have never really made it across the borders. I guess the weather usually kept the spirits lower but this year, the day of the race turns out to be the hottest and sunniest day of the year so far. The atmosphere is great.

In the end, the yellow hats win: it is the team of the psychology department. Lucky me, I get to be among the winners because my roommate is a psychologist. What a day. What a party. What an experience.