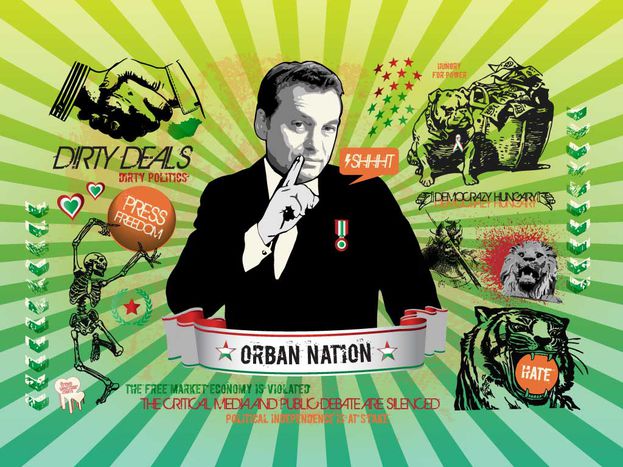 Commentary: Hungary’s PM declared in a speech that he is ready to navigate his country towards a brave new world based on work and community. The international press raised its vigilant head to these outragous words, while I am shaking my head: there is nothing new in the country of Orbanistan.

I would love to write about the success of Hungarian start-ups all over the world, prize-winning films and writers or the super cool Sziget Festival – but our politics seems to cause a bigger fuss than any of the other subjects mentioned above. I don’t make a big a fuss out of it, as it has been four years that my country’s government has been going into the direction of autocracy.

I remember it started very lightly after the party of Viktor Orbán won the elections in 2010 with a 2/3 majority in the Parliament. I realised that the news section of the state-owned radio I used to listen to started to cite the prime minister every now and then, regardless of the subject. I wondered how one man could be an expert in all fields.

Then came the law against the freedom of the media in 2011, the law of the early retirement of judges and the change of the voting law in 2012, the seriously questionnable New Constitution in 2013 along with the insertion of the governmental party’s allies in the constitutional court. In 2014, Orban signed an agreement with Putin to construct two nuclear energy plants, without the scrutiny of politicians or experts.

Elections were held in April 2014. Orban's FIDESZ party was reelected, suggesting that Hungary will continue to go in this new direction. I thoroughly researched the all the programmes from each party; but, FIDESZ didn’t have one, they only repeated what they had started to say in 2010.

Viktor Orbán says that a country’s competitiveness is based on its government rather than its economy, citing Turkey and Russia as prosperous examples, suggesting that their success is based on the values of their societies. For Orban, the European model of liberal democracy doesn’t work; he intends to reform the Hungarian state into an  'illiberal democracy'. The organising principle of this society is not the liberty of the individual but the greater need of the community. He says that the welfare state model has proven insuccessful and that Europe must change into a 'workfare' model to catch up with the world.

So, according to Mr Orban, what’s wrong with liberty? He says that liberty has no boundaries in liberal states – as if he has never heard of fundamental human rights or doesn’t think the legal system works at all. Even if he finds these institutions unsatisfactory, instead of reforming them, his solution is to extend the role of the state. He doesn't consider that civil society in public life could improve Hungary, as he claims that non-governmental organisations consist of political activists financed by foreign interest groups.

Poor Hungary against the evil EU

Perhaps he considers the EU as a foreign interest group, considering how he portrays them. The ’bureaucrats in Brussels’ expression became a standard part of his speeches, as threatening to freedom in Hungary. Orbán says he is not against the European Union – he just simply doesn’t care about it. He doesn’t think that the Union’s decisions do any good.

However, Hungary seems to be quite well thanks to the EU: 97% of public investments were financed by the EU between 2009 and 2011. Lithuania came up second in the race ’living from EU-money’ with 80%, while the average is 10%. The trend continues in 2014, as Hungary received generous EU-funds to be given in the period 2014-2020.

It means that the show can go on – we take EU-money, spend it on spectacular investments, communicate it as a result of good governance: everybody’s happy, Orbán stays in power. Luckily, the European Union is still a democracy, they refused to send funding for the 2014-2020 period to Hungary, because they are worried about how the new government will handle them.

Orbán still doesn’t seem to be worried about the delay, speaking of illiberal democracy instead of reforming the systems. The reason of his confidence could be our blossoming friendship with Russia, resulting (so far) in the contract of the construction of nuclear reactors. This contract makes Hungary dependent on Russian energy supplies and causes a serious long-term indebtedness to Russia. Apparently, he doesn’t think ’beaurocrats in Moscow’ would threaten our freedom.

’Our time may come’

He’d rather speak about ’his time’ instead of 'our time’ as long as he keeps deciding on his own, without any professional debate and social discussion. There is no democracy, liberal or illiberal, in a country where the governing political party refuses to debate with its rivals before the elections. Also there is no democratic principles in a person who cancels a visit to a university because they only let him hold a speech followed by an open debate, as democracy on the level of the individual is nothing but the willingness to be questioned on his opinions and accept others.

If Hungarians want to live in a democracy and stay in the European Union, there is no ’our time’ with Viktor Orbán. If we prefer to give up our free will and follow the vision of one person in the hope of living happily ever after, we can embrace him again and again, and let his time come. This speech declares how Orbán sees the world, the choice is now with the citizens.